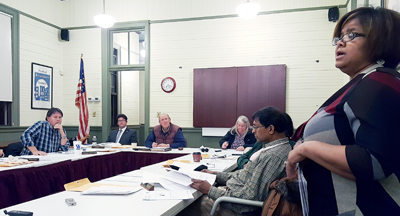 STANFORD — After hearing a presentation from the local health department, Stanford City Council members are debating the implementation of a smoking ban within city limits.

Miller distributed documentation with data from the Tobacco Free Kids advocacy group on the cost of smoking in Kentucky.

The data shows that smoking costs Kentucky $1.92 billion in annual health care expenditures and the 74 percent of Kentuckians who don’t smoke also foot the bill.

The data also shows the toll on Kentuckians health with 4,830 new cases of lung cancer annually and 8,900 adult deaths each year from smoking.

“Smoke-free is just exactly what it says, where you don’t have smoking. But tobacco-free means there are no tobacco products at all,” she said. “That’s the type of policy we have at the health department. We started out with tobacco-free and just in August of 2014, we also (prohibited) electronic cigarettes.”

Miller also included a copy of a 2007 Lincoln County ordinance that bans smoking inside county properties. However, according to the ordinance, smoking is permitted within “a reasonable distance” outside the Lincoln County Courthouse, the Arch “Buzz Walker” Building, the Lincoln County Judicial Center, the KU Annex, and the Planning and Zoning/Building Inspector’s Office, provided smoke does not enter through entrances, windows, ventilation systems or other means.

Steve Bullock, who hosts WPBK-FM’s morning General Store program, said there is usually a group of people smoking outside of the Property Valuation Administrator’s office on Main Street (the building also houses WPBK-FM).

“If I want to go talk to David Gambrel about my property taxes, I have to walk through that,” he said. “I raised tobacco for 30 years. It’s not that I’m against farming or raising tobacco, but I know what chemicals are on there. I shouldn’t have to take those into my body just so I can go see (Circuit Court Clerk) Teresa (Reed) or (PVA) David (Gambrel) or Eddie (Carter) or any other place.”

Bullock said there’s an empty parking lot 100 feet away but people don’t want to lose their place in line.

“One of the ladies that works at the PVA office is terribly asthmatic,” he said. “So she has to catch her breath in the street, walk through that, and then exhale and inhale when she gets inside of her workplace. To me, it’s the smoke. Whether you all do tobacco-free or not is up to you but I agree, E-cigarettes need to be there as well. It’s not right to those of us who choose not to for health reasons to have to walk through it to be able to license our vehicle.”

Councilman Ronnie Deatherage asked if all of Main Street would be included if the city were to ban smoking in public places.

Carter said the city could designate a specific distance from public buildings in their ordinance.

Most businesses and restaurants in the county have voluntarily become smoke-free environments, Miller said, aside from a few retail businesses.

“Some of your retail stores still allow smoking,” she said.

City Councilwoman Sara Givens suggested the city approach those retail businesses privately to see if they would be interested in becoming smoke or tobacco-free.

As far as enforcement, Carter said code enforcement and other city resources could help.

Carter suggested council members study other cities with policies in place and talk with constituents prior to next month’s meeting.

City Council members also agreed to invite the public to the next monthly meeting to express their opinions on the policies.

Miller said with new statistics coming out on e-cigarettes, the health department will be rolling out a new campaign next month to educate the youth in the community about the dangers of e-cigarettes.

The next Stanford City Council meeting will be at 6:30 p.m. on Feb. 1 at the L&N Depot. The public is invited to attend and voice their opinions on smoke-free or tobacco-free policies within city limits.