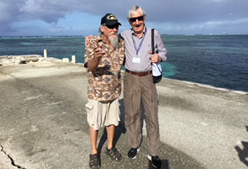 Photo contributed D Ralph Young stands with a tour guide on the same spot where he landed June 15, 1944.

Editor’s Note: Local veteran and author D. Ralph Young plans to share his experiences with The Interior Journal as he returns to three of the four islands where he served in combat during World War II. This is the first report received from Young.

The past week we have spent time in Tokyo and Guam. Tokyo is impressive with a beautiful skyline in all directions. I have been there several times and always marvel as to how they keep the city so clean. But, to be honest, I never fail to have this uncomfortable feeling when I see Japanese my age, as I wonder if they are the ones that fought like “Barbarians” during WWII. I guess I feel like the native Chamorros who live here on Guam. We observed the area where they were detained in the middle of the jungle and survived by livIng off the land of fruits and vegetables. 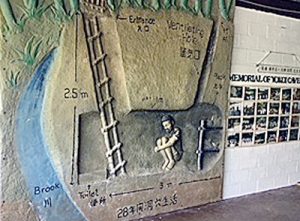 Photo contributed
The above illustration shows how a Japanese soldier survived here on Guam for 27 years after the war ended before he surrendered.

We saw today how the Chamorros were treated by the Japanese after Guam was occupied the day after Pearl Harbor. I read a quote by the Chamorros which said they were willing to forgive BUT, they will never forget.

I am the only one in the group on tour that was involved in combat during WWII. Needless to say, I get a lot of questions.

Tomorrow we leave for Saipan. I do not know at this point what my feelings and reaction will be when I see the same beaches again where I landed as an 18-year-old kid. Of course, being 18 and from Lincoln County, I thought I could conquer the world. The truth is I had no idea how big the world was at that time in my life.

My reaction as we circled to land at the airport was a surprise – seeing so many high-rise buildings and beautiful white sandy beaches. This time the bodies lying on the beach were sunbathers rather than dead bodies. I had difficulty pin pointing the exact spot but, when I described two features that I remember from 73 years ago, our guide said this is the spot.

Our guide was a well-educated American who came to Saipan many years ago. He is married to a native Chamorro (the name of the indigenous tribe) and has served in the local government since it was established after WWII. The entire tour group insisted that he and I pose for pictures on the spot where I had landed on June 15, 1944. The rest of the day was spent visiting battle sites throughout the southern part of the Island and the American Memorial Park. The guide said if you do not see everything in the Park today, you will get second chance tomorrow as we are coming back for a Ceremony.

The following day we spent all morning in the Northern part of the Island. We visited Suicide Cliff and Banzai Cliff, where thousands jumped to their death because the brainwashing had convinced the civilians that the Americans were cruel and barbaric people. 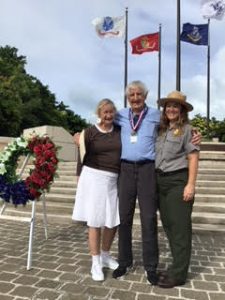 Photo contributed
The National Park Service for the Marianas Islands award D. Ralph Young with a medal for “WWII Valor in the Pacific.”

After lunch, we came back to the American Memorial Park for the surprise of my life. The National Park Service for the Marianas Islands was there to award me a medal for “WWII Valor in the Pacific.” They just do not get many WWII veterans visiting anymore. I have been one of the lucky ones, too, still being blessed with reasonably good health and strength. If you have read my book “ The Power of a Mother’s Prayer”, you know the answer as to why I have good health.

The next day we traveled to the Island of Tinian on small piper cub planes. The trip took less than 10 minutes but the only way to get there was by plane as the ferry service stopped a couple of years ago. 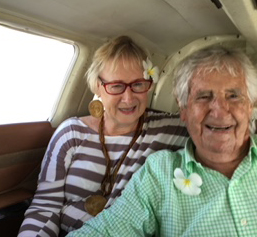 Young and his wife Janice take a photo as they travel on a small piper cub plane to the Island of Tinian.

This time it was not too difficult to find where I landed because White Beach One was such a small one. During WWII I was with a group that had been transferred to the ship APA 37 (USS Caviler)because my ship was to be a part of the fake landing on the southern beaches. We swam into the beach with a floating pier that would allow us to bridge over the coral reefs to land troops and supplies. The fake landings worked and we had very little resistance from the Japanese. Also, Tinian is very flat and open so the Japanese could not move their troops north to oppose the landing because the ships off shore kept them pined down. Admiral Spruance called this the most brilliant amphibious operation of WWII. I am proud to have been a part of the operation.

Now, it is on to Okinawa.This means we get up at 1:30 am fly to Guam, then on to Fukuoka, Japan before changing planes for Okinawa. Our tour guide Camille, and a new friend Russ, made the trip easy with their youth and energy.

Our first day on Okinawa was spent seeing the beaches where our troops met the Japanese. We also visited the many caves, which both the Japanese and the people of Okinawa used for hiding during the battle.

I was able to observe the vast bay where my comrade and I generated smoke to hide our ships from the Japanese, especially the kamikaze planes that sunk so many of our ships during the battle for Okinawa.