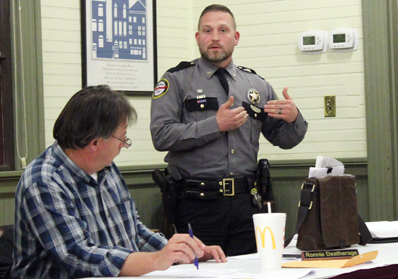 The discussion of moving money began during the council’s Nov. 21 special-called meeting — during which they approved the purchase of a 2011 Dodge Charger from the City of Danville for $9,000 — but was tabled until the regular December meeting.

“We discussed a little bit during that meeting about taking some of the money out of the dog fund — we have a dog fund that’s for feed and vet bills and whatever — to help pay for this car because we don’t have it in the budget and we’ve gone over-budget in several different areas here and we’re going to end up having a tight budget,” Mayor Eddie Carter said last Thursday.

While the K9 fund is strictly for the Stanford Police Department’s K9 unit Nico, Carter told council members last week that the city was facing the potential loss of a valuable part-time police officer unless they decided to fund a full-time position.

“We have an outstanding part-time policeman here, and that’s Ryan Kirkpatrick. He is so good, and so trained, and so competent that he has many people wanting to hire him — other cities. He is so on top of it and I don’t want to lose this man,” Carter told council members.

I think we can make it work, maybe, if we can take some of this money on this cruiser, for the dog only and try to go ahead and hire him full-time.

“I’ve talked to the chief about it and he really wants to keep (Ryan),” he said. “I think we need to move forward while we can and hire him full-time.”

Councilman Ronnie Deatherage said he came to the meeting last Thursday with the intention of making a motion to hire Kirkpatrick full-time.

“I’ll be honest with you, that’s the main reason I’m here,” he said. “I applaud you for this and I’m all for it, wholeheartedly. You read my mind.”

Carter reminded council members that the city would be incurring additional costs in the near future as it updates the comprehensive plan.

“Everything we went over-budget (on), I’m for,” he said. “We’ve got the comprehensive plan coming up here that’s going to cost us, when we get into it beyond the goals and objectives, Bluegrass ADD is going to cost approximately $12,000 that’s not in the budget.”

Another $1,500 will be needed to update the city’s computer system for future audits, and possibly $14,000 to purchase an additional Durango for the police department in the spring.

“I think he actually talked to the retirement board and they said he was better off going non-hazard…” Middleton said. “I called over and got the numbers and it’s about $3,000 of savings. I did numbers from now until the end of the budget this year and it’s going to be about $3,000 in savings on non(hazardous) versus hazardous.”

Middleton said the police department has about $3,400 in seized drug money, too.

“That, I’m still working on the details, but regardless, it will go in to pay for something that’s budgeted,” he said.

Carter said if the council agreed to reallocate some of the K9 fund’s money, the city would be able to afford the full-time position.

“To get somebody with the status of Ryan on full-time and really go after these drug dealers, I just think it’s a win-win to do this,” he said.

Councilwoman Peggy Hester asked how much the police department would be able to put in to make Kirkpatrick full-time. Middleton said $5,500.

“How we came up with that was the $4,000 that we were going to have to put into a car and then ASAP (Agency for Substance Abuse Policy) gives us $1,500 a year to keep replenishing the K9 fund,” Middleton said.

Carter said there was a little over $10,000 in the K9 fund as of Thursday last week.

“People have been so generous to support that,” he said. “We’re not going to ever let that fund not support the dog.”

City Attorney Chris Reed offered to donate the $1,500 owed to him by the city for reviewing ordinances to the K9 fund.

“I wasn’t planning on taking it anyways, so I’d be happy to transfer that over to the K9 fund,” he said.

Councilman Naren James made a motion to transfer $5,000 out of the K9 fund and into the general fund, essentially paying back half of the $9,000 spent on the K9 cruiser last week while freeing up funds to cover the cost of the full-time position.

The motion was seconded by Deatherage but Councilman Scottie Ernst moved to amend the motion to $4,000.

The amendment died from lack of a second. The council unanimously approved the motion to transfer $5,000.

A local resident in attendance, who asked to remain anonymous, pledged to donate $100 a month to the K9 fund for dog food — the pledge was met with a resounding applause from everyone in attendance.