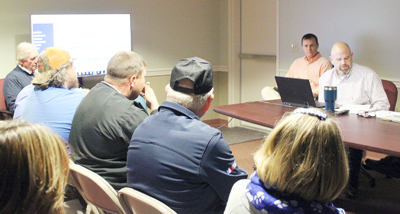 STANFORD – Representatives of the McKinney Water District repeated their concerns about the quality of water purchased from Stanford that they claim is failing state regulatory tests but this time, Stanford Water Commissioners were there to respond to the accusations.

Stanford Water Commissioners sat quietly during a special-called meeting Nov. 14 as Mike Reed of the McKinney water district recapped the complaint he made during Stanford’s November city council meeting in regards to the “cancer-causing chemical” in the water.

“Basically, what he told me was that the organic material in the water is in all water…and then when they put the chemicals in there, to take care of the organic material, it creates a situation…which causes cancer,” Reed said. “Is it very serious? This is what Luther said…you would have to drink several glasses of water every day for 20 or 30 years for it to have any effects. But the Division of Water, which is who we deal with, doesn’t want it in there. They don’t like it in there.”

The McKinney Water District purchases water from Stanford but does not treat any water, he added.

Jonathan Baker, attorney for Stanford Waterworks, said McKinney buys water from more than one entity but the water that Stanford produces meets all requirements by law.

“We haven’t had a violation in years and water in other districts, Stanford Water has no control over their levels,” Baker said.

Aside from a minor violation for pulling only nine of the 10 required water samples during the 2016 snow storm, Stanford Water Works’ last violation was in 2010 and was brought into compliance that same year.

“The water that we get from Stanford, basically 90 percent of it comes in out here by the ball park or where the fort (Logan’s Fort) is,” Reed said. “That’s where McKinney and Stanford waters meet right there. If you pull a sample at Roy Lee Rickenback’s house, which is less than a quarter-of-a-mile away, and you send them off, it doesn’t pass.”

Stanford resident Donna Aldridge asked how the water could change from “good to bad” within just a quarter-of-a-mile of where it came from.

Troy Carrier, water treatment plant supervisor for Stanford Waterworks, said improper flushing of the system on the McKinney side is a possible cause.

“It could be not flushed properly,” Carrier said. “I’m not saying that’s true but it could be. We flush our system twice a year, according to what we’re supposed to do.”

Les Gooch of the McKinney Water District said a “Rural Water” representative was with them when they took the sample.

“And it didn’t pass…it’s not that we’re fudging it. We had a guy with us,” Gooch said.

Lonnie “Pumpkin” Brown, general manager for McKinney Water District, said they’re not the only ones in the state having difficulty.

Brown said McKinney flushes their lines twice a year and as needed throughout the year.

“McKinney Water ain’t the only one in this boat, there’s like 67 other districts having the same problems we’re having,” Brown said.

But Stanford Waterworks is not one of them, according to General Manager Ryan Owens, who said Stanford is actually surpassing many in the state thanks to optimizations made to the system.

“If you take the sample we pulled (at) the same time their sample was pulled and you go to the farthest outreach in our system, it will pass with flying colors also,” Owens said. “As Troy said, once it hits that system, there’s something there in those pipes that could cause that.”

Owens said Stanford Waterworks has been working to find the cause of the problem.

“What makes a difference is, we don’t know where they’re taking their sample,” Gooch said. “The only way to settle that problem, as I see it, is take the Division of Water representative and go with you (Stanford) to your closest person and go with Pumpkin (McKinney), take a sample on your side, take a sample on our side. There’s no arguing about it.”

“Didn’t you just say that it failed?” Baker asked.

“I took several and it’s failed right at the meter,” Brown answered.

“Did the Division of Water take those?” Baker said.

“No, but I mean…if I’m getting hot water at the first point, there ain’t nothing I can do on up the system,” Brown said.

Brown said Tim Blanton of the Kentucky Rural Water Association will be visiting McKinney Water to look into the issues.

“I’m under court-order and stuff and I’ve got to be in compliance in another year-and-a-half and like I said, it’s costing me money every three months to be out of compliance,” he said.

Brown and Owens said plans are in the works to resolve the issue.

Also during the November Stanford city council meeting, McKinney Water said they were owed close to $39,000 by Stanford Water for over-billing during the first five months of this year.

The billing issue stems from a water meter failure that lasted several months, according to Reed, who spoke to the council.

“Here’s our position on that,” Baker said. “we’ve had four meetings with McKinney Water regarding that issue. The contract to sell water to McKinney was that McKinney Water was to maintain the meter that controlled the flow or measured the flow of water. That was out for six months and McKinney was aware of it and did not repair it.”

Baker said meetings were held in an attempt to reach an agreement but each time the groups met, the numbers changed.

“We did leave the meeting without an agreement but that was after sitting down and going back and forth several times trying to reach an agreement,” he said.

If the two parties are unable to settle the matter amongst themselves, Baker said the Public Service Commission (PSC) will have to mediate.

Fred Short, attorney for McKinney Water District, said the PSC “frowns on anything being presented to them” until all possibilities of resolving it amicably have been resolved.

“It seems to me that we’re still at an impasse,” Short said.

Baker said a response to Short’s last letter has been mailed but Stanford Waterworks’ does not agree with McKinney’s claims and expects the bill to be paid in full.

The meter that failed was an “odd ball” meter, according to Reed, and couldn’t be acquired in a short amount of time.

The meeting ended without a resolution but both attorneys agreed to meet and continue to attempt to reach an agreement.