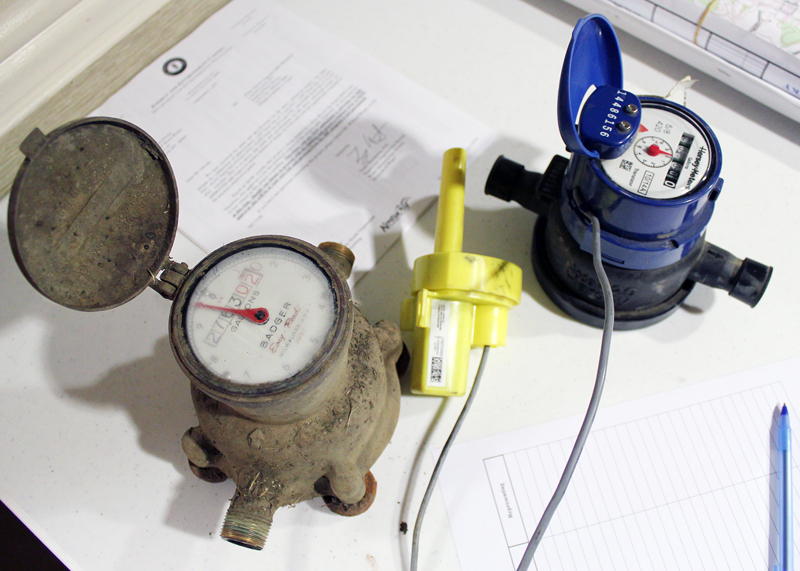 STANFORD – After several claims were made during Stanford’s city council meeting this month, the Stanford Water Commission called a special meeting this week to address questions about billing and water quality.

Stanford Water General Manager Ryan Owens began by showing those in attendance how to find the Division of Water website online to view public records regarding water quality, as well as past violations.

The public can visit http://water.ky.gov/Pages/Division%20of%20Water.aspx, find the Online Services tab, click on Drinking Water Watch and find the county map at the bottom of the page. Visitors can then click on Lincoln County and choose from the four water companies to view more information on each. For each water company there is a link to Violations/Enforcement Actions on the left side of the screen.

“As you can see, 2010 was the last time we received a violation for Haloacetic Acids. We’ve only received one since then and it was for not pulling enough samples during the snow storm in 2016,” Owens said. “You can go through and look here and see that this is the only violation that we’ve received for our drinking water.

That means Stanford has met all of the regulation standards presented by the Environmental Protection Agency and the Kentucky Division of Water.

“We’ve also won awards on area-wide optimization programs, which is where the systems are encouraged to achieve higher goals and more stringent than the regulations that are produced. We are one out of 36 plants in the state of Kentucky that do that.”

Owens said a third-party entity has also been hired to monitor regulations and testing results.

“We are actually being used as examples throughout the state on our corrosion control plan that we’ve implemented and on how to manage the standards,” he said. “A lot of organizations are doing presentations on our water plant.”

“So our water quality here is excellent. We’ve been recognized for that, we have awards to prove that.”

Issues with fluctuating and randomly-high water bills were brought to the city council’s attention during the regular November meeting. Stanford Water Commissioners welcomed questions Tuesday night and offered to sit down with anyone in attendance to discuss their particular bills.

Owens said Stanford Water begins reading water meters around the 10th of every month and it typically takes two-to-two-and-a-half weeks to read those meters.

Something Stanford does that many do not is what Owens called “re-checks.”

“Which means, when the readings come in, Shirley goes through those, we go out and re-check those meters,” he said. “On or after the 11th, depending on how that day falls, we add penalties. Any day after the 15th is shut off. Usually we give a few extra days for shut off…”

Owens also showed two types of water meters, one old and one new, both of which are found within the city. 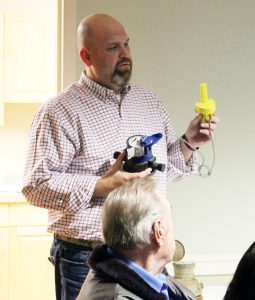 Photo by Abigail Whitehouse
Ryan Owens, general manager of Stanford Water, shows the difference between old water meters and the new ones being installed over time in the city.

“There are so many different kinds of meters in our system and this is what we currently have throughout, different types,” he said. “This is a new meter that we’re installing in our system.”

Depending on the style of the meter, the reading on them will be different.

“We’ve also had some complaints in town where we hear people say ‘they read the meter across the street but they didn’t read ours.’ The reason for that is we’re installing these new meters in our system,” he said.

The new system allows Stanford Water to look at the history of each day and determine the “peaks and valleys” of water use for each customer.

“Hopefully in the next year-and-a-half, we’ll have all these type of meters in our system, where it will be a drive-by radio-read system and you won’t see us walk by anymore and check your meter, unless it’s a re-check,” he said.

Owens also explained the process for reporting or investigating possible water leaks and passed out documentation of approximate calculations when it comes to the amount of water typically lost during a leak and how much it can cost.

“We went back and looked over the last three months, on average, we’ve only adjusted about nine bills,” Owens said. “Of those bills, some of them were leaks and some of them were under or over-read. That’s not saying that we don’t make mistakes…”

Owens said most of the issues in billing will be corrected by the new meters once they are completely installed across the city.

Stanford City Councilwoman Peggy Hester shared a list of names – about 15 – of people who said they have had billing issues. 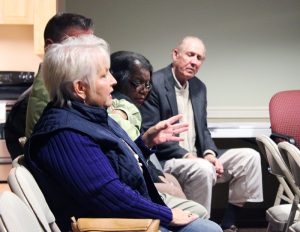 “Anybody is always welcome to call and talk to us about those bills,” Owens said.

“Well, there hasn’t been any satisfaction in that so far,” Hester said. ‘Most of the people on this list have called and they’re always told, the pad answer is, ‘you have a leak.’ A lot of these people have checked and there is no leak. We’re talking about bills fluctuating from $39, $49, $59 up to $157, $158. This has been happening not just since the increase in July.”

“We’ll be glad to take a look at it and see,” Owens said.

Kim and Dino Jones said that was the situation for their family. Kim Jones said the water bill typically fluctuates between $50-60 unless it’s in the spring when they fill the pool. When the family received their October bill, it was about $140.

“When he questioned it, we got the answer ‘there may be a leak.’ So somebody came out to check and we didn’t have a leak. I guess that’s just our confusion,” she said. “I think that’s sort of been the consensus, you just all of the sudden get this water bill that’s almost three times higher than your normal water bill.”

Dino Jones said the following month’s bill came back down to the regular amount so there clearly wasn’t a leak.

Owens said water customers can expect a 30-to-40 percent increase when a new water meter is installed to replace the old.

“A lot of times if the meter goes bad, it slows down. You can request a new meter, at your cost. We can test the meter. If it comes back to where it’s faulty, we will replace that and it’s no charge,” Owens added.

“They told my husband that it was read wrong,” she said. “That’s unacceptable, that’s almost a $100 difference.”

“Like I said, we make mistakes and will makes mistakes as long as we continue to manually read those,” Owens said. “Some of them, as you can see on the old one, it’s fogged up and you can’t hardly see and that’s one of the reasons we’re transitioning to the new meters…we do take care of those and adjust them.”

The McKinney Water District also attended the special-called meeting Tuesday night to discuss claims of over-billing and water samples from Stanford they claimed violated state requirements. See next week’s paper to read more about the exchange.