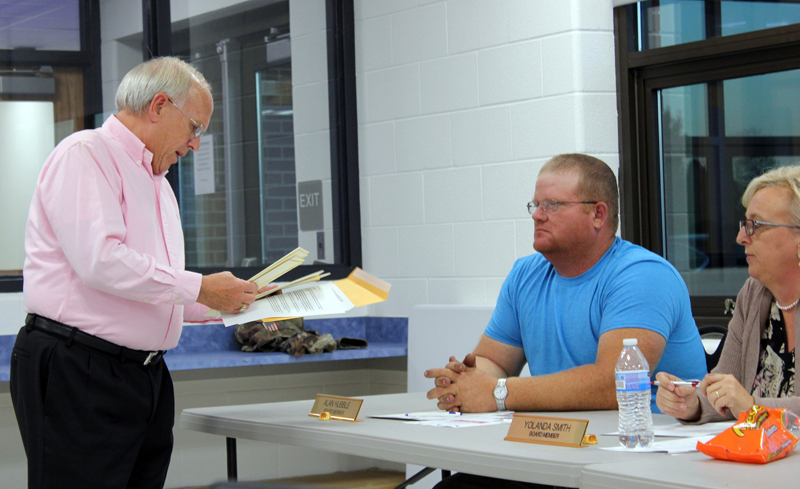 Photo by Abigail Whitehouse Stuart Underwood shares a letter written by a Fort Logan High School student to board members during Thursday night’s Board of Education meeting. 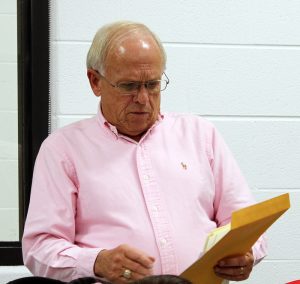 The vote was 4 to 1 with Board Member Alan Hubble voting against the motion.

Stuart Underwood, who has been helping with day-to-day operations at Fort Logan High School since former principal Scott Montgomery’s retirement, passed out a letter to school board members from a Fort Logan student.

“Let me start by saying that this was a plan that was developed in collaboration with not only the high school administration, but district administration and I’m just the one that got drafted to present,” Godbey said. “The students who are currently at Fort Logan High school are Lincoln County High School students, they’re our students as well, and we’re just working to provide what’s best for them.”

Godbey said LCHS currently has a credit recovery program so relocating Fort Logan’s program would just be an addition to the one in place.

“All we’re looking at doing is changing the location…we’re not looking at taking students and throwing them back out into the regular flow of the seven-period day because, you know, that wasn’t successful for them,” Godbey said.

One of the biggest advantages to the relocation, Godbey said, is that the students will graduate with a Lincoln County High School diploma.

Fort Logan Credit Recovery students will transition to LCHS and begin classes there Jan. 3. A transition committee will be established, consisting of the superintendent, district leadership, school leadership, staff and students from LCHS and FLS.  The first meeting will be held Nov. 27 at 1:30 p.m. at the Student Support Center.

FLS students will have a separate environment to learn for part of all of the day, with a “school within a school approach” the document states. Students will have the option of not interacting with other LCHS for the remainder of this year if it’s in the best interest of the student.

“Fort Logan will not close, as the alternative school for behavior will remain in place and housed in the same building as it is currently,” according to the document.

Superintendent Michael Rowe said he will serve as FLS principal, now that Scott Montgomery has retired and there will be fewer students at it’s current location.

“With the number of students there, I can take on that job responsibility. I’ve actually served as a principal of an alternative school before so I can take that on, too.”

Rowe said that decision will also save the district some money. The superintendent shared his thoughts on the transition during the school board meeting as well.

“After reviewing the plan, three things that popped out in my mind is obviously, it’s a better facility. Facilities of our Fort Logan building are nearly 100 years old,” said Superintendent Michael Rowe. “There’s going to be more academic opportunities, the opportunities for kids to step outside Fort Logan, if needed, to be able to take some elective classes. And really, it’s just fiscally responsible. We know, and we talked about, we’ve got to be cutting our budget from anywhere between $700-800,000 and this is one step that we can start putting a dent into that.”

“If we don’t tighten our belts as a district, my fears are that we’ll run out of contingency fund and the state will come in and make those decisions for us,” Rowe said. “This is one of many difficult decisions I think the board is going to have to make because we want to continue employing people and we already know the state’s considering passing down to us additional funds that we’re going to have to pay for retirements.”

Board member Alan Hubble asked why Fort Logan School was set up in the beginning.

“There were no other alternatives if you fell behind with credits to graduate. Fort Logan provided the opportunity for students to go and do some recovery work and be able to graduate,” Godbey added.

Hubble said there was a very close connection between FLS graduates and the staff.

“It’s a very personal connection and this letter here describes what I was thinking to a “t”, that this young man wrote,” Hubble said. “We may not have the money, I don’t know, but it definitely has it’s place and they probably do need a better facility than where they’re at, I don’t know the answer for that. But I think we may be basing this decision on money alone, more than the concern of the children. That’s my two-cents worth.”

Board member Theresa Long reiterated that no one was dissolving Fort Logan School.

“It will just be in a different setting,” she said.

Godbey said the program will be moved to a former computer lab room at LCHS.

“We’re going to take one of those computer labs and convert it into a half-lab, half-classroom setting to facilitate this group and again, they will have that small setting just like they had at Fort Logan,” Godbey said.