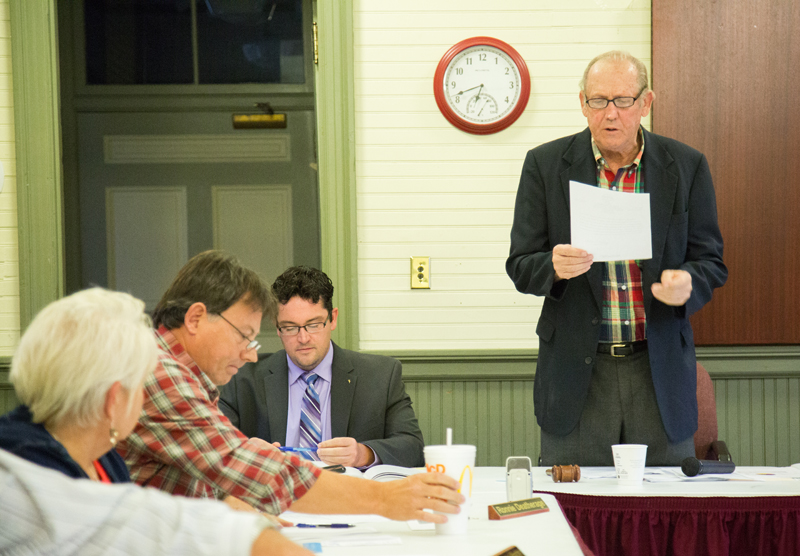 STANFORD — Thursday night’s Stanford City Council meeting got off to a rocky start, after a public statement from Mayor Eddie Carter concerning his firing of the city clerk led members of the public to level numerous allegations of improper behavior against Carter.

None of the allegations were backed up with evidence. After the meeting, Carter vehemently denied that they ever happened. In a post-meeting interview, Carter argued the allegations were fabricated to “tear up my integrity and my character,” and said he was considering the possibility of a lawsuit against those making the claims.

Carter fired City Clerk Dana Taylor on Wednesday, but was unwilling to publicly state that he had done so or comment on the firing that day. At Thursday night’s city council meeting, Carter read from a prepared statement concerning the firing:

“On Wednesday … as mayor of the City of Stanford, I removed Dana Taylor from the non-elected office of city clerk,” Carter stated. “Pursuant to Kentucky law, a mayor is authorized to remove a non-elected official such as the city clerk at will. I removed Ms. Taylor from her office based upon the incompatibility between the two of us, and it was a difficult decision for me to make.

“Over the years, she and I have proven to be incompatible in our personalities, which does not serve the interests of the citizens of this city. I want to thank Ms. Taylor for her service to the city and wish her well in her future endeavors.”

Carter then said he would “turn the chair over to the City Attorney” Chris Reed for any questions.

“I have some questions,” said Heather Mullins, the daughter of Taylor.

“I have some questions for the mayor, but you may speak for the mayor if you wish,” Mullins said to Reed. “I’d be careful what you say, though.”

Mullins recounted allegations first made publicly during October’s regular city council meeting, concerning times when Carter allegedly used the bathroom with the door open in city hall and was present in a public space in city hall with his pants unzipped. She alleged Carter fired Taylor because she told others about the behaviors.

“You say you fired her because you were incompatible, you didn’t get along? Because I think it might be because she asked you to shut the bathroom door when you went to the bathroom,” Mullins said.

Mullins said it is illegal to fire someone for whistle-blowing, which is what she believes happened.

“I’m going to have to put an end to it — I apologize for doing that to you,” Reed told Mullins. “The mayor’s statement speaks for itself. Kentucky is an at-will state and his decision was based upon incompatible personality.”

Jim Jarrett also spoke. Jarrett first presented allegations of misconduct and impropriety against Carter at the Stanford council’s October meeting, including the allegations referenced by Mullins.

Jarrett was also involved in a controversy concerning Taylor and Carter earlier this year, when Carter instructed Taylor that she was sitting too close to Jarrett while he reviewed public records at city hall. That disagreement was brought out in a public city council meeting by Taylor.

Jarrett, a member of Lincoln County Planning and Zoning, said Taylor has always been “very professional” as city clerk.

Carter’s firing of her “had to do with the fact that she reported him and she reported all the misdeeds he has done,” Jarrett said.

Jarrett said he’s aware the city council has no say in hiring and firing of city employees — that’s exclusively the mayor’s responsibility. But “it’s up to the council whether or not he remains mayor,” he said.

Council member Peggy Hester spoke up at that point to note it takes a vote of all six members of the council to remove a mayor and “we don’t have six votes.”

“I’ve seen Mayor Carter’s behavior in some meetings a little bit out-of-control, in my opinion. I do believe that Mrs. Taylor did a fine job,” she said. “… I am sorry because I do care a lot for Mr. Eddie Ray Carter. From years ago, I remember you. You ran around with Pat and Brad and Larry and Joe — that’s how I remember you. I’ve never seen you angry, I’ve never seen you upset. And to see you behave like you have in some of these meetings was disturbing to me.”

“I know that you have a serious health problem, and sometimes a health problem can interfere with your judgment,” Hazlett continued. “… I have never seen you in the past ever been angry or raise your voice and I’m beginning to wonder if, from health reasons, should you not resign?”

Carter suffered a stroke in August 2014, when he was a council member, which left him hospitalized for some time. Carter was appointed mayor by the city council in January 2015, after the winner of the 2014 race to be mayor, T.J. Hill, died of a heart attack weeks after the election. Carter then won a special election in November 2015 to serve out the rest of Hill’s term, through the end of 2018.

The council had on its agenda approval of the minutes from the October meeting where Jarrett listed his complaints against the mayor, but it tabled the minutes for consideration at a future meeting.

Taylor attended Thursday night’s meeting, but did not speak. She said Friday that while the allegations she remembers being made during the meeting were all accurate in her opinion, those made by her daughter, Mullins, should “maybe (be) set aside as maybe being biased.”

“Her comments — we’ll put those aside because she is related, even though they were accurate,” she said.

Taylor said she knows Jarrett and Hazlett because she has assisted them at city hall before, but she doesn’t consider them close friends.

Taylor said she does not have hard evidence of what she alleges against the mayor; she is also unlikely to file any kind of lawsuit over the matter.

Asked if she is planning to take any action following her firing, Taylor said “this is something that I’ve got to think through.”

“It’s not something to do in haste. I’ve been encouraged to file suit, but until you’re the one that’s involved in it … I may die before it’s ever settled because those things can drag out,” she said. “I’m not a vengeful person; I’m not out to destroy the city.”

Taylor said she has “high respect” for the residents of Stanford and wouldn’t want to cost taxpayers additional money.

Taylor said she thinks the right thing at this point would be for Carter to resign.

After Thursday night’s meeting, council member Hester said any time “sexual harassment is an accusation, then I think at least that the mayor should have the opportunity for rebuttal.”

“That boils down to one word against another,” Hester said. “… I’ve known him since he was 9 years old. I’m not saying she’s lying; I just find it hard to believe.”

Carter said Taylor never filed a formal complaint concerning his behavior. He said while he admitted to some mistakes pointed out by Jarrett concerning how he carried out city business, the allegations about his behavior brought up Thursday night are entirely false.

“This has all been hearsay and second-hand information,” he said. “She never filed anything against me or complained about me on anything.”

Carter said he remembers that he may have washed his hands once in the bathroom at city hall without closing the door.

“Maybe I should have closed the door … but I was just washing my hands,” he said. “… I always zip my britches up when I come out. I just hate to see it tear up my integrity and my character just on hearsay, you know what I mean?”

Carter said the allegations against him amount to an attempt at character assassination.

“I’ve got too much to lose. I’ve been almost a quarter of a century serving this city,” he said. “… I’ve got young nieces and nephews out here at the school, I’ve got family. Just to crucify somebody — it’s one thing saying something and proving something is a different thing. It’s something that’s really going to tear your character down and your integrity. I just think it’s so unfair.”

Carter said he has “talked to an attorney about slander.”

Carter said during Thursday’s meeting that Peggy Orberson will be filling in as city clerk until someone can be hired permanently. Taylor said she received a new job offer on Thursday.