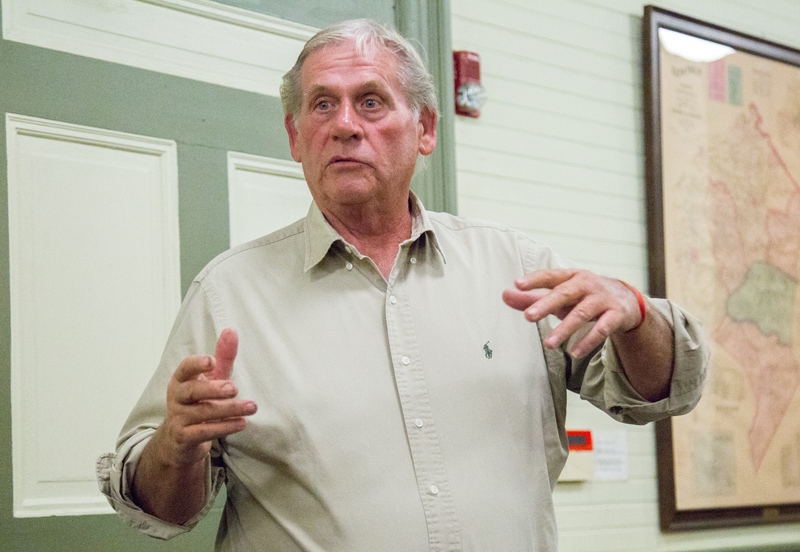 Photo by Ben Kleppinger Mike Reed with the McKinney Water District explains during Thursday’s Stanford City Council meeting why McKinney believes Stanford Water over-billed it by nearly $39,000 during the first part of 2017.

The McKinney Water District says the Stanford Water Department owes it nearly $39,000 for over-billing during the first five months of this year.

Mike Reed with McKinney spoke to Stanford City Council members Thursday about his district’s issues with Stanford Water’s bills, explaining that they stem from a water meter failure that lasted for months.

McKinney Water District receives all of the water it distributes to its customers from a pipe in the vicinity of Martin Luther King Jr. Boulevard in Stanford. The meter on the pipe is what Stanford uses to determine its bill to McKinney, but the meter failed in mid-January and repairs were completed until May, Reed said.

The contract between Stanford and McKinney states that if a meter failure occurs, Stanford should bill McKinney based on previous usage, according to a letter sent to Stanford Water by Frederick V. Short, an attorney representing McKinney.

“A review of those invoices reveals that the estimated usage cost billed by your client exceed(s) the deemed usage cost … resulting in a net overcharge of $38,765.53,” Short’s letter reads. “Although the relevant prior period invoice amounts were readily available to your client, which are the figures which could and should have been used to make the estimates, your client chose to generate estimates, which bear not reasonable relation whatsoever to the designated prior usages, and which to date, have not been supported by any documentation to justify their existence.”

Short states that Stanford over-billed McKinney “by amounts anywhere from in excess of 160 percent to in excess of 200 percent” on each of four billing periods questioned. The letter notes during a fifth billing period affected by the meter failure, Stanford under-charged McKinney by about $1,400 — otherwise McKinney’s estimate of the over-billing would be above $40,000.

Reed said the negotiations stopped at that point, until the two entities met together again to continue discussing the issue.

“When we showed them the $38,000 they really owed us, they just walked out of the room,” he said. “… They just got up and walked out and said, ‘we’re not going to negotiate or even talk about this.”

“I will go on record saying … that that’s not the way any board of this city should conduct business,” City Council member Peggy Hester said. “That’s $38,000 they don’t want to answer to.”

McKinney wants Stanford to repay the over-billing by crediting a little more than $9,600 on each of its next four bills, according to Short’s letter. McKinney will “absorb any potential interest on the advanced funds and their attorney’s fees to date as a concession to cover any errors in calculations and as a good faith gesture to resolve the issues created entirely by use of the excess estimates without further controversy or expense to either party,” Short wrote.

No one from Stanford Water attended Thursday’s council meeting. Hester said she had worked to make sure someone would attend, but the person who was supposed to attend was out-of-town.

Reed said McKinney also has an issue with the quality of the water it is getting from Stanford.

McKinney is failing tests it’s required to do because of a “cancer-causing chemical” in the water, and it can’t do anything about it because the water is already failing the test when it arrives in McKinney’s system from Stanford, he said.

“How serious is it? Not very serious. They say you’d have to drink four 8-ounce glasses of water for 50 years for it to hurt you,” he said. “But the Division of Water is on McKinney. They’re telling us we’ve got to come up with a plan to deal with this. What do you do?”

“We have,” Reed said. “Basically what they said is you buy the chemicals. … They didn’t want to deal with it.”

Hester also noted that there have been many complaints about fluctuating water bills in town recently.

Multiple residents stated that their bills have been suspiciously high, or that they checked their bills against their meters and the usage number on the bill was much higher than what was on the meter.

Hester said she herself got suspicious water bill in 2013 for $800. No one could find a leak and there was no problem with the meter; she wound up having to pay the whole bill to keep her water on, despite complaining, she said.

Council member Scottie Ernst said he spoke with Stanford Water about the complaints he’s been hearing.

“They said they did have a new employee that read the meters wrong — that was one issue they had,” he said. “… (and) They had sickness. Some were on vacation and some were sick and some of the residences got extra days on one bill, less days on another.”

Deatherage noted rates did recently go up to fund new lines, but the increased rates are not what the complaints are about.

Hester said she’s aware the City of Stanford can’t do anything directly about Stanford Water, which is its own separate entity, and expressed frustration that no one from Stanford Water attended Thursday’s council meeting.

“The reason I don’t want to get into this any deeper is that I have at least 15-20 names through private messaging (who have bill issues).  I think we can address it all we want to tonight, but the water board is going to have to be present, whether they want to or not,” she said. “The resolution comes with them. We can talk about it, but they’re a board on their own — the city does not manage them … or anything like that.”

Hester said she hopes to arrange a meeting at “an appropriate time where everybody can attend — not 10 O’clock on a Monday morning,” the regular meeting time for Stanford Water. “Then we can get some answers.”

Carter said he would work to get a meeting called at a time “that’s agreeable to most people.”