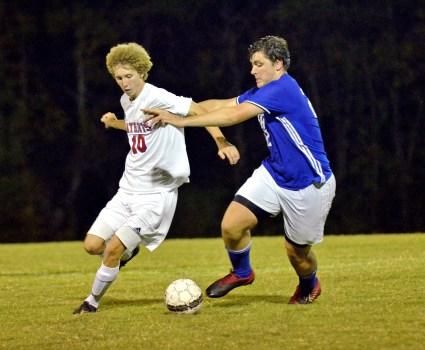 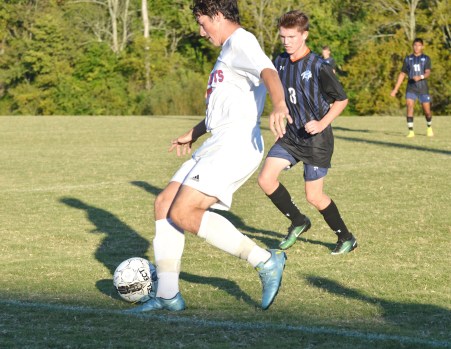 Photo by Nancy Leedy LINCOLN COUNTY senior Brandon Dixon, working the ball along the sideline during the soccer Patriots’ 3-1 win over the visiting Southwestern Warriors Monday, scored one of the soccer Patriots' six goals in a 6-0 Senior Night shutout. Lincoln's other seniors, Jacob Baird and Gavin Poynter, also scored in the win. 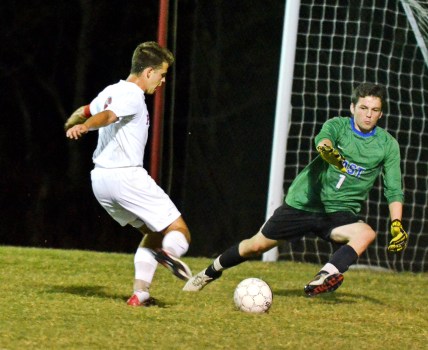 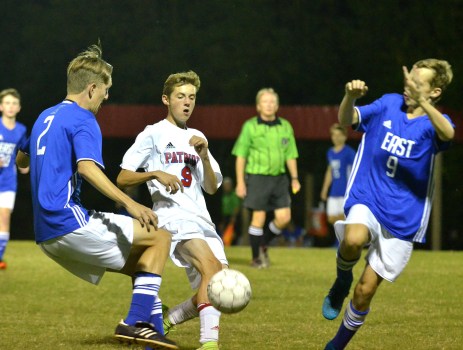 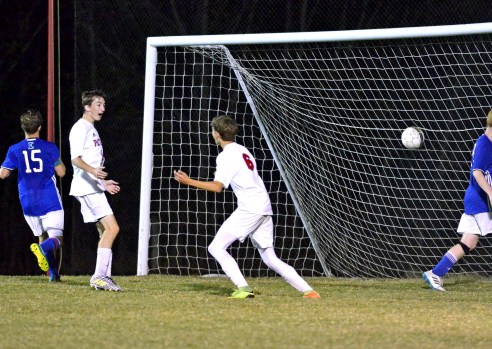 STANFORD — The Lincoln County boys soccer team struck early and dominated the tempo for most the game as the Patriots cruised to a 6-0 Senior Night shutout against visiting East Jessamine Thursday night.

“That was nice getting a shutout,” Lincoln coach Lewis Cummins said. “We’ve not had too many of those this year (4 total). But we played pretty well tonight. I was pleased with the effort of everybody – defensively, offensively, everything. Everything just kind of gelled tonight.”

“It makes it special for them because the last few years they’ve put in a lot of time and effort. It’s kind of nice on their Senior Night that they can get a win, and all three of them were able to score.”

Dixon, a midfielder, was the first senior to get on the scoreboard, finding the back of the net just over a minute into the game and giving the soccer Patriots all the momentum they would need as they dominated the Jaguars. The goal was Dixon’s second of the season.

“If felt good just putting one in on Senior Night,” Dixon said. “We just try to take one game at a time, but it was like an emotional night for all three of us.”

Trey Cummins, a sophomore midfielder, made it 2-0, Lincoln, punching in a shot to the back left corner just over seven minutes after Dixon’s goal.

Poynter, also a midfielder, was the second senior to score. Poynter tallied with 17:04 left in the first period to give the Pats a comfortable 3-0 lead that they would hold onto for the rest of the first half. He added a second goal in the second half, prompting cheers from the crowd for a “hat trick.”

Poynter didn’t get that third goal, but he said that didn’t matter.

Baird, a striker, rounded out the senior scoring stats, igniting the second-half scoring with a goal in the first minute – and the rout was on. Poynter connected for his second goal of the night less than two minutes after Baird’s goal, then Gavin Skipper, a freshman midfielder, booted in the final Lincoln goal with 15:36 to play.

The soccer Patriots (8-5-4) gave the visiting Jaguars (2-15) little opportunity to score, limiting them to just eight shots on goal compared to Lincoln’s 29 shots on goal.

Baird, who now has 21 goals for the season, said Lincoln needed the East Jessamine win, and not because it was Senior Night.

“It was a good bounce back game because Tuesday night we went up to Frankfort and kind of suffered a tough loss. So it was good to get back out here and bounce back in a positive way and put some goals in,” he said. “It was really big for our defense to get the shutout tonight. I was really happy for them.”

“We’re also trying to get ready for district,” Baird said. “That is pretty important for us right now and we took a big step that way tonight.”