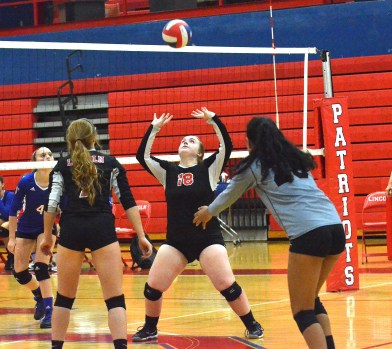 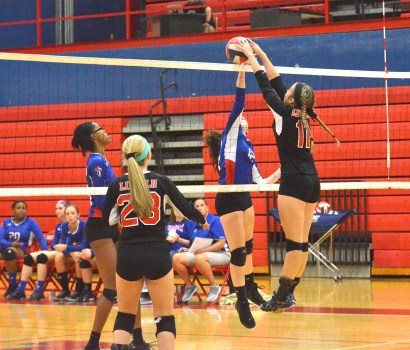 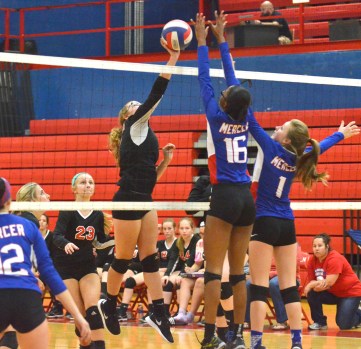 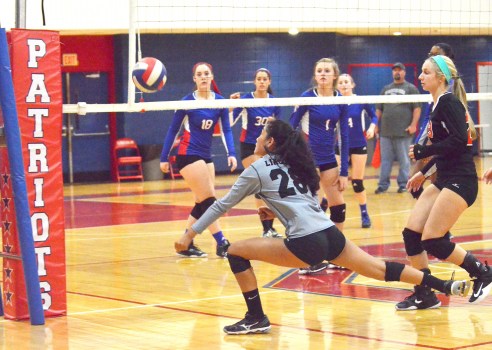 Photo by Nancy Leedy ALL EYES are on the ball as Lincoln County libero Haley Bowen goes for a dig to try and save a point for the Lady Patriots in Game 2 of the team’s 3-1 victory over visiting Mercer County. Lincoln is now 20-5 overall, 8-0 on its home floor.

With the victory, the Lady Patriots picked up their 20th win, improving to 20-5 overall and holding steady as the top team in the region. Mercer falls to 8-13.

“To get our 20th win, and then on top of that we haven’t lost a game at home all year (8-0). That’s even better,” Lincoln coach Samantha Torres said. “Another good job. They’re doing really well. They work really hard.”

Lincoln and Mercer were tied at 1-1 in Game 1, but the Lady Patriots took the lead on sideout and would hold that lead for the duration of the game. Lincoln scored five straight points behind the serve of Cassandra Jett to grow its lead to 14-6,  then put up the last six points of the game behind the serve of Savanna Smith for the 25-10 win.

The Lady Patriots led from start to finish in Game 3 to roll 25-7. Jasmine Whited was at service on the last six points of the game.

Mercer found its rhythm in the second and fourth games of the best-of-5 match, however, even taking the second game 25-23 to tie the match at 1-1.

The two teams traded leads in the second game, but Mercer finally pulled ahead for good behind the serve of Brinkley Prewitt. The Titans trailed 23-21 when they got sideout, then Prewitt served up four straight points for the win.

“This late in the season it was a little unexpected that they struggled. The second set they finally did much better together and that’s why they ended up taking that second set,” Torres said.

Mercer also challenged in game four and was within 18-15 before Lincoln’s Haley Bowen took over service on the sideout. No one else would step behind the service line in the game, with Bowen serving out the 25-16 win for the match.

“That final set they were playing well and they started coming back on us, but we kept playing strong,” said Torres. “One of the big things that really helps us against other teams is that we’re really aggressive. We’re very scrappy. We go after everything no matter how far or how impossible it seems. They just go after it and keep playing well.”

The Lady Pats will try to extend their home win streak to nine games tonight as they host Somerset.