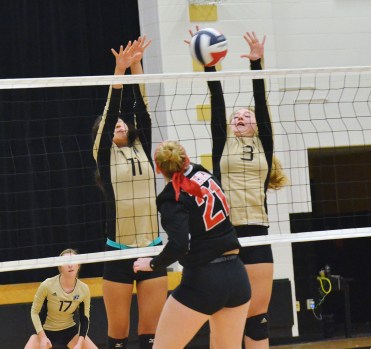 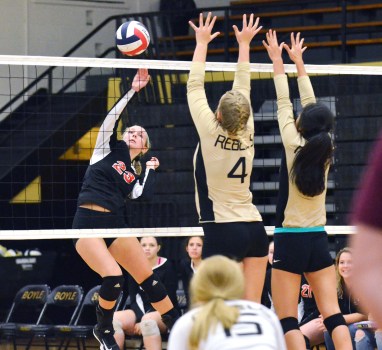 Photo by Nancy Leedy TARYN JOHNSON goes up for a kill in Lincoln County's 3-0 win at Boyle County. 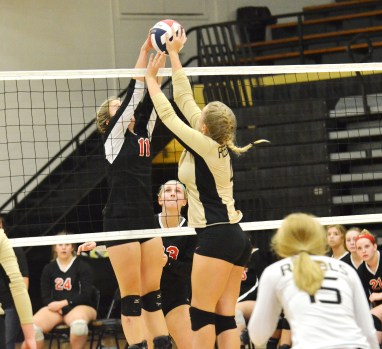 “The thing that really helps is we have a team that really works well together. They all step to the plate and do really well,” Lincoln coach Samantha Torres said. “Boyle worked hard, but I think we did well. We played our game.”

Junior Savanna Smith put up stats across the board to lead Lincoln. She had eight kills, six blocks, six digs and an ace. The one exception in her stats – she had no errors.

Lincoln led for most of the best-of-5 match although Boyle did hang around in Game 1 and Game 3. However, the Lady Rebels, who fell to 9-13 overall, 1-3 in the district, were dominated completely in Game 2, with the Lady Pats opening up a 12-3 lead and never looking back.

“My team fell apart completely,” Boyle coach Andrea Craig said, a characteristic of her team that she says she has seen too often this year.

“We’ve struggled. Finding leadership. Maintaining leadership. Maintaining the ability to persevere through any obstacle that may be in their way whether in themselves or external factors. Maintaining peace within the group and moving together as a unit has been a struggle. Volleyball is a game that the team has to be together. You are six individuals on the court but you have to work together to make the wins happen. And right now that isn’t happening for them.”