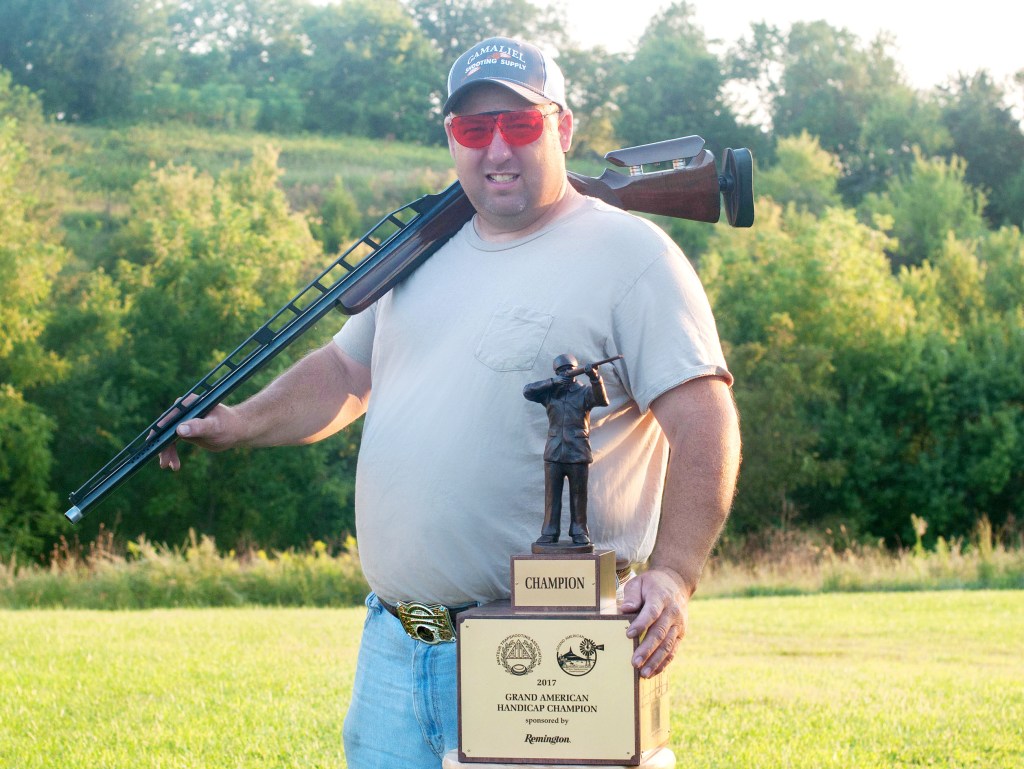 DAVID ELDER of Stanford with his Grand American Handicap championship trophy following his win over 2,009 other trapshooters at Sparta, Illinois.

Elder, 42, shooting a Browning BT 99 Plus shotgun, was the lone shooter in the entire field to break 100 straight targets, putting together his first perfect shoot.

“That was the first time I broke 100,” said Elder, who shoots locally at the Cedar Creek Sportsman’s Club. “You always kind of kid around about winning, but to actually win it … I was tickled with it.”

The Stanford trapshooter bested 2,009 other competitors to claim the top prize, blasting all of his targets from 22-yards out to beat another Kentuckian, Smiths Grove teen Elijah Wilson.

In the Grand American Handicap (GAH), trapshooters fire at clay targets (approximately 4-1/4 inches in diameter and 1-1/8 inch in height) launched at varying angles. Participants are assigned a yardage from 19 to 27 yards (according to averages and known ability) and fire at one target at a time.

Elder, who has been shooting for 20-plus years and competing seriously the past five years, had a long wait to find out just how he would fare against the competition, as he was in one of the last groups of the large field of competitors to shoot.

By the time Elder had his turn late in the day, he knew that he had to have his personal best effort – a perfect score – to win.

But while Elder had a perfect shoot, his gun didn’t.

“When I was shooting, I loaned my gun to another guy,” said Elder. “After the 50th target was whenever I loaned by gun to a boy in front of me. His gun broke. I loaned him my gun for two shots. Two shots and then he went and got his other gun. He did miss one target. We was laughing because he got the only miss on it. Glad it was him and not me.”

Wilson’s 99 would earn him the runner-up spot in the GAH. Four other shooters tied for third place. Anita Knearem of Tower Hill, Illinois, Patrick Lamont of Manitoba Canada, Cooper Wyatt of Crossville, Tennessee, and Jack Criner of Coffeen, Illinois, all broke 97 targets.

For his win, Elder received $7,200 in cash and a large champions’ trophy.

“I was pretty happy about that,” Elder said. “I wanted to shoot well, but didn’t really think I’d win. It was great to get to win that much money.”

The GAH win has also made Elder the cover model for the October issue of Trap and Field Magazine. The magazine will also feature an article on Elder and his first GAH win.

“I’m going to try to win it again,” said Elder. “I want to be the first to win back-to-back Grand American. There’s never been a repeat winner, so I’m definitely going to try and repeat.”