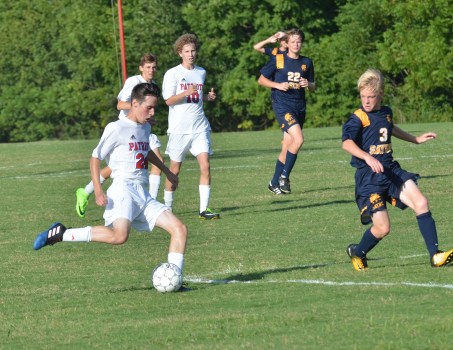 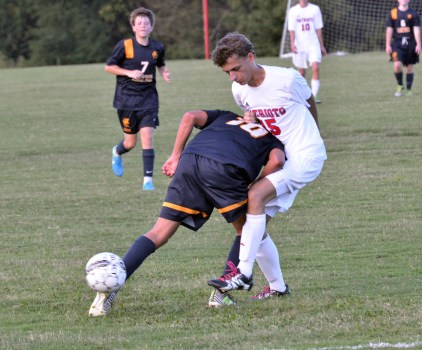 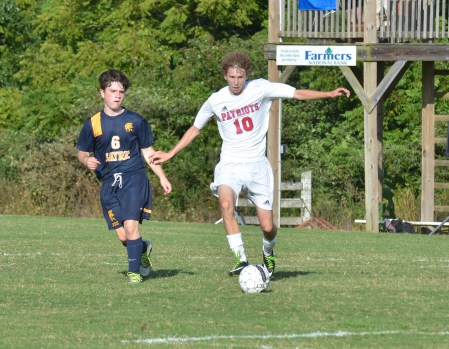 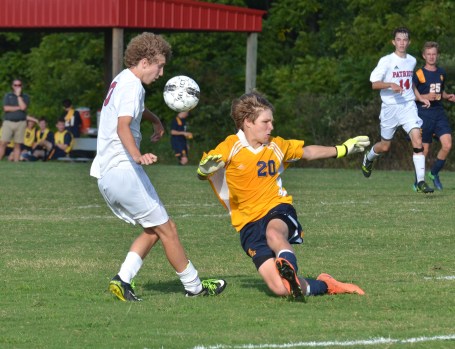 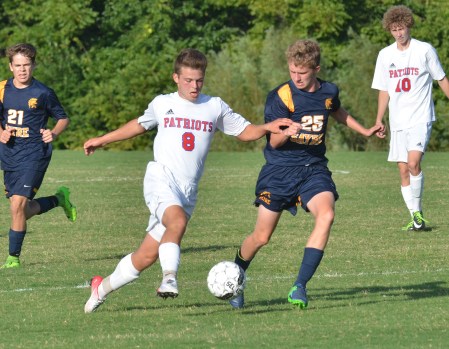 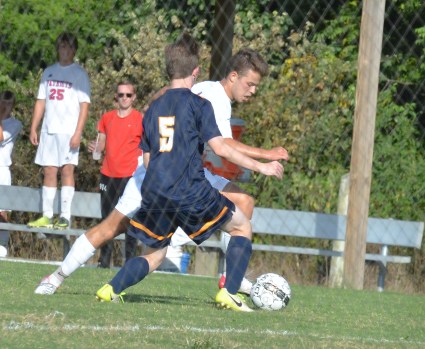 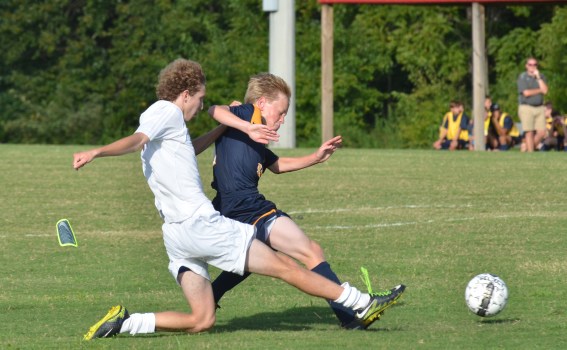 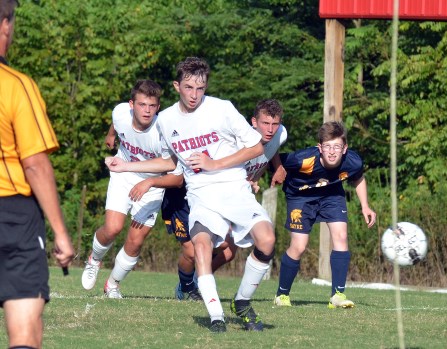 Photo by Nancy Leedy ALL EYES are on Lincoln’s Gavin Poynter as he takes a penalty kick shot on goal in the first half of the soccer Patriots’ 1-1 draw with Sayre. The first-half kick was wide right. Players keeping an eye on the play are, left to right, Lincoln’s Jacob Baird and Austin Wethington and Sayre’s John Beebe.

STANFORD — The Lincoln County soccer Patriots had little trouble finding the goal in their season opener at Estill County, derailing the host Engineers 8-1.

The same could not be said for their home opener with Lexington Sayre Thursday, with goals hard to come by as the soccer Patriots played to a 1-1 draw with the visiting Spartans.

“(Sayre) was a better team,” Lincoln coach Lewis Cummins said. “Sayre is normally pretty good and they were today. The goalie (Trey Atkins) was unbelievable. He played really well and was a big difference in the game. He wasn’t letting anything get by him.”

And Lincoln had plenty of opportunity to score on Sayre’s sophomore keeper. Leading up to halftime, Lincoln poured on the attack with strong attempts, including a penalty kick by Gavin Poynter in the 21st minute.

Mac McLean broke a scoreless tie with 8:18 left in the first half, putting up a lofting shot above the hands of Lincoln goalkeeper Carter Tillett then following through for the score after the first shot fell short of the goal.

“At halftime the boys were a little frustrated because they hadn’t got a goal in and were down 1-0 after I thought we really dominated play,” said Cummins. “We just couldn’t finish anything.”

Lincoln had 11 shots on goal the first half compared to three shots by the Spartans.

“They didn’t get but three shots and the third one went in. That’s kind of soccer – unfortunateley,” Cummins said.

The soccer Patriots would outshoot Sayre 19-7 for the game, but could only get one shot into the net.

Midway through the second half, Trey Cummins punched in a goal to get Lincoln on the scoreboard. Gavin Poynter got the assist on the goal, getting the ball to Cummins in front of goal off a corner kick.

Cummins had the opportunity to break the tie just over a minute later when Sayre was called for a trip, but Atkins, who had eight saves for the game, dove out to grab the free kick by Cummins and deny the soccer Patriots.

Lincoln (1-1) still has a long schedule ahead of it this season and Coach Cummins expects a strong run.