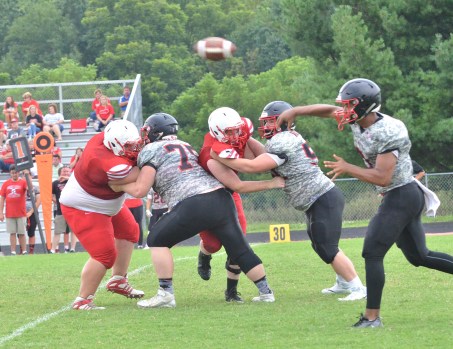 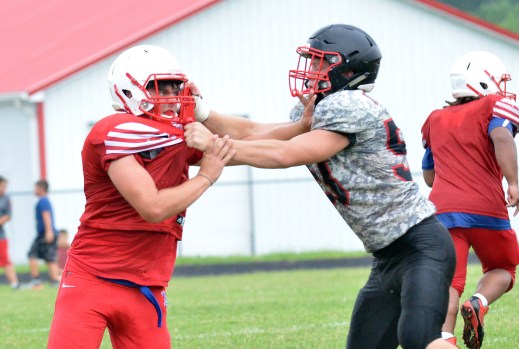 LINCOLN'S Jacob Napier works to get around Wayne's Ethan Clark during Friday's scrimmage at LCHS. 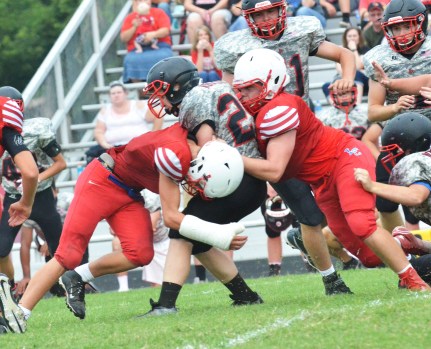 CRUNCH! The Lincoln defense traps a Wayne County running back, holding him to zero yards gained on the carry. 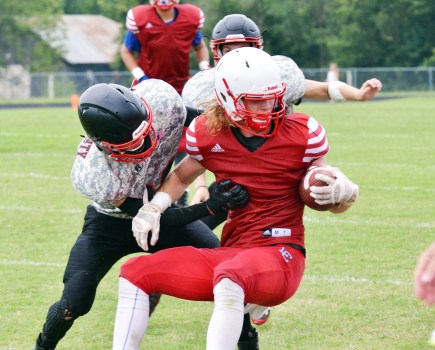 JOSH SALYERS, a senior receiver, tries to lean back for a few extra yards on this pass reception during Friday's Lincoln-Wayne County scrimmage 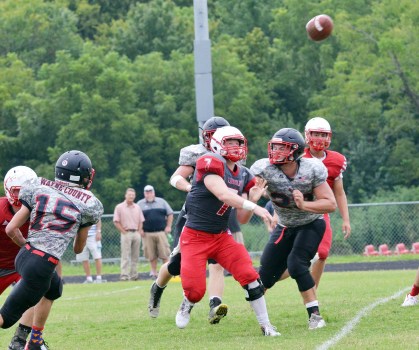 JUNIOR QUARTERBACK Bryson Yaden gets off a pass during Lincoln County's scrimmage against Wayne County Friday night at Death Valley Stadium. Yaden returns to lead the Patriots after missing last year due to a knee injury. 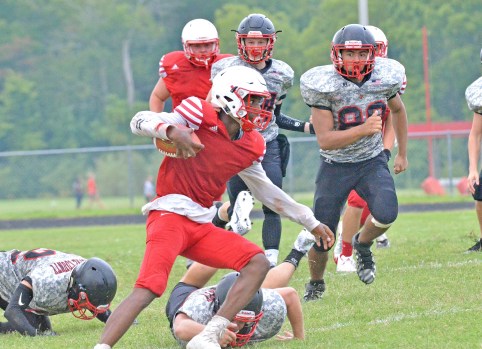 LINCOLN BACK Darius Napier leaves would-be tacklers on the ground during Friday's scrimmage with Wayne County.

The wait is over!
After months and months of waiting, the high school football season is here.

The 2017 season kicks off in earnest this weekend, with numerous contests and bowl games going on around the state. And that includes right here in Stanford at Death Valley Stadium.

The Lincoln County High School Patriots will be among the first teams to get their season going, kicking off at 6 p.m. tomorrow night on Bill Ed Leedy Field as they host the 20th Annual Death Valley Bowl.

Fourth-year coach Travis Leffew and his Patriots open their gridiron season in game one of the DVB doubleheader Friday, taking on the Clay County Tigers.

In the second game of the Death Valley Bowl, Somerset will go head-to-head with Bourbon County. Kickoff for the nightcap is set for around 8:15-8:30 p.m.

Both teams struggled last season with Clay, a Class 4A school, finishing 1-9 and Lincoln 1-10 but, unlike the Tigers, the Patriots did make the playoffs. Lincoln was defeated 55-21 by Whitley County in the first round.

Clay County is being led by first-year coach Mike Sizemore.

The Somerset Briar Jumpers, led by Robbie Lucas, made it to the second round of the Class 2A state playoffs in 2016. Somerset went 7-5 on the season, defeating Prestonsburg 35-6 in the first round before being knocked out by Lexington Christian 47-14 in the second round.

Lucas, a former head coach at Lincoln, is in his ninth season as the Briar Jumpers’ head coach.

The Bourbon County Colonels and sixth-year coach John Hodge come into Friday’s Bowl games off a 6-6 season, which also included a run into the second round of state playoffs. The Colonels defeated Rowan County 46-12 in the first round of the Class 4A finals in 2016 before being ousted by Ashland Paul Blazer 43-13 in the second round.

The cost of admission to the Death Valley Bowl is $10. No passes will be accepted.