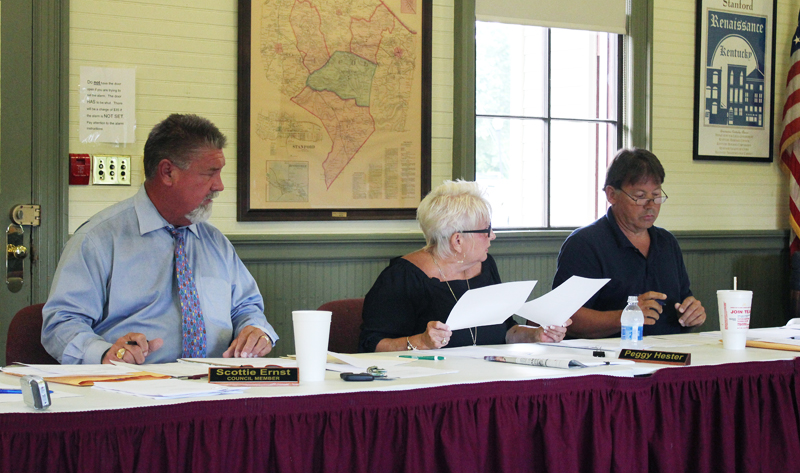 STANFORD – City Council members moved forward with plans to take the four-percent revenue increase for real and personal property tax rates after learning that it would be lower than last year’s rates.

City Attorney Chris Reed confirmed both the compensating and four-percent tax rates would be lower than last year’s real property tax rate of 13.4 cents per $100 of assessed value.

Councilman Scottie Ernst asked the public – who filled every seat in the room – in attendance of the Aug. 3 meeting to offer their opinions on the tax rate options.

Carter reminded the council a public hearing would have to be held if the four-percent growth rate is chosen.

Ella Curlis said the city needs to look at what the city can survive on, as far as revenue.

“If it’s not going to raise the taxpayers’ property tax or personal tax, then you need to look at what the city can survive on,” Curlis said.

Carter said it’s a good position to be in because the rate is going to be lowered either way.

Tim Estes said if the city doesn’t take the four-percent tax rate then it will never recoup that money.

“This city will never have the opportunity to recoup all of that money if you don’t take the four-percent,” he said. “If it’s not going to cost us, and I still own property in town…take the four percent because if you don’t, you’re always going to be trying to make that up and you’ll never recoup it.”

Stanford resident Jaime Mingo said she was in favor of the city taking the four-percent growth rate as long as her taxpayer dollars are used in the best way they can be spent.

“Either way you go, you’re not going to raise my taxes,” said Gary Brummett.

The compensating tax rate would have been 13.1 cents per $100 of assessed value.

Councilwoman Sara Givens said it’s a “no-brainer” and made a motion to take the four-percent revenue increase. The vote was unanimous.

“We will have to have a hearing,” Carter said.

Reed said the second reading must be approved by Aug. 28.

The council recognized Dean Speaks and Andrea Miller for the donation of four picnic tables for Depot Park. The council also recognized Jack and Wanda Withrow for their service to the city.

• Heard a report from Planning and Zoning Chairman Ward Hart.

Hart said the Planning and Zoning Commission participated in a training put on by the Kentucky League of Cities. The training was part of the commission’s continuing education, Hart said.

“They’re starting to put the building up over there,” he said. “The old Dollar Store building, looks like they’re coming along real good with that. Looks like they’re probably going to have that done pretty quick. That’s a new business going in there and then they’re starting to do some work on the old Food Lion building. That’s probably going to take a little longer because they have to do some work on the inside of the building. They’ve already redone the parking lot and they’re going to paint the outside and get it looking nice too. So, got some good things going on.”

Hart said KLC said most cities’ sign ordinances are out-of-date due to a Supreme Court decision in 2016. Hart recommended the city check their ordinance to make sure they are updated with the current court decision.

“It actually goes back to the First Amendment,” he said. City Attorney Reed said he anticipated the ruling and drafted the city’s ordinance to address that.

The council tabled the minutes from the July 20 meeting for reconsideration after Councilman Ronnie Deatherage asked about a change that was approved.

Deatherage asked why the first word of a quote by City Attorney Christopher Reed was changed from “In the beginning” to “At the beginning.”

Carter said he would like to revisit the tape and determine which word was used. The council was invited to listen as well.

Carter said City Clerk Dana Taylor did. Taylor clarified that the change was made at the mayor’s request.

“The first one I presented to you, and I have a copy of it, said ‘In the beginning.’ Then you had me revise…” Taylor said.

Taylor said she listened to the tape three times before presenting the mayor with the minutes to make sure the correct words were transcribed.

Ernst made a motion to table the minutes until the issue is resolved. The vote was unanimous.

The Council voted unanimously to exempt any businesses operating as a non-profit 501(c)(3) from the business license fee.

• Discussed a conditional use permit issue

Eugene Shearer addressed the council regarding a conditional use permit he was previously granted by the planning and zoning commission several years ago.