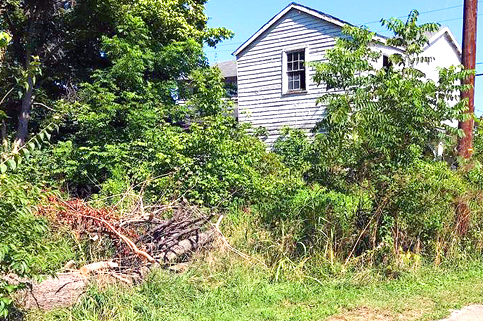 Photo contributed A brush pile, left by the city, is shown on the property of 105 Second Street in Stanford.

STANFORD – It wasn’t until after a certified letter had been mailed that Stanford’s Code Enforcement Officer realized a brush pile listed as one of several nuisances on a local property had been put there by city employees.

The letter was sent to the estate of George Wolford, to care of George Logan, on June 19, according to public records, and stated the property at 105 Second Street was dilapidated and needed to be torn down.

“Grass and weeds over 12 inches” and “rubbish and brush piles” were also listed as nuisances on the property. 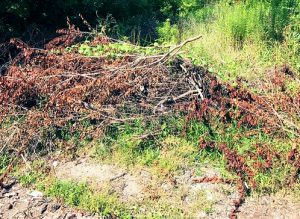 Photo contributed
A brush pile, left by the city, is shown on the property of 105 Second Street in Stanford, which is privately owned.

“I did find out the brush piles were put there by the city,” said Jeff Knouse, the city’s code enforcement officer.

“We got that cleaned up,” Carter said. “We even cleaned up some of their part too, there was a big tree limb down and we went ahead and got that.”

Carter said he thought the city owned the area on the end where the brush was left.

As far as the opposite side of the road, where more brush piles were cleared  last week, the city does own that land, he added.

The flood-prone land was cleared using FEMA funds and turned into a permanent green space.

Carter said there was no cost to the clean-up efforts last week but Knouse said the situation, nonetheless, put him in an awkward position.

“I sent a violation to somebody to clean up their property and come to find out the city did it,” Knouse said. “It does put me in an awkward situation. Unfortunately, if I had known that, I would not have sent the violation the way I sent it.”

Knouse said he apologized to the property owner.

Knouse said he also gave the property owners an extension to tear down the structure since there are several heirs involved and the issue will have to go to court before the property can be sold. Knouse said Logan expressed interest in selling the property to nearby Stanford Presbyterian Church.

Jailer Rob Wilson said he was informed that a Lincoln County Regional Jail inmate was helping the city at the time the brush was dumped on private property.

“I got a phone call telling me there had been some brush, they said, illegally dumped,” Wilson said this week. “That was on Friday. So I came in Saturday morning, got the inmate and took him with me and told him I wanted him to point out these areas.”

Wilson said he and the inmate first visited a pile of brush that was left on the property where Logan’s Fort is located.

“Then he took me down behind the old EMS building and showed me a huge dead spot on the ground. He said they had a lot of stuff piled up back there,” Wilson said.

Wilson said he was told several county dump trucks were used to remove the brush from both properties.

Based on the information he received, as well as what was provided by the inmate, Wilson said he felt compelled to speak to the city’s street supervisor who also oversees an inmate on work detail on a regular basis.

“I can’t have my inmates taking part in anything that might be perceived as wrong, as far as dumping things on people’s property,” Wilson said. “I spoke with the city street supervisor and advised him that I didn’t appreciate it and it would be in everyone’s best interest if it didn’t happen again.”

Wilson said if he learns of a similar situation occurring in the future he will have to stop providing the city with an inmate.

“If someone sees an inmate out there doing something like that, they won’t call the city, they call me because the guy is wearing an inmate shirt,” he said. “When we let them (the city) use inmates, we expect them to use inmates the proper way, the way that they were trained as supervisors.”

Carter said the situation has been corrected.