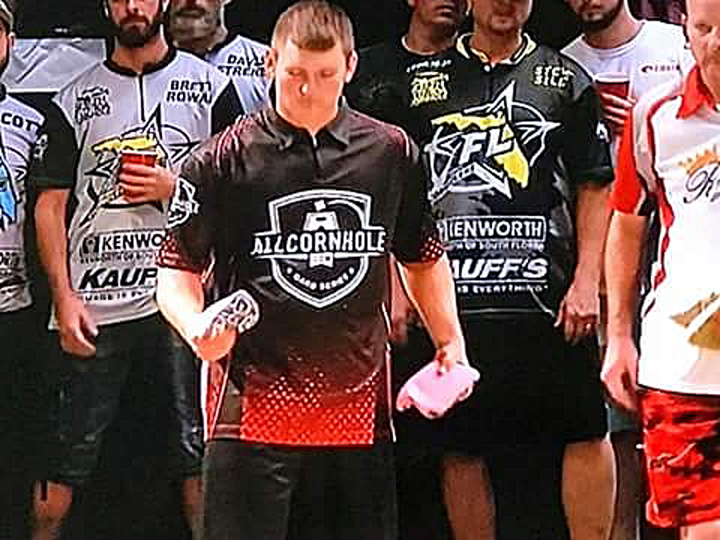 Photo submitted by Jordan Langworthy ALL EYES ARE on Jordan Langworthy, including his opponent, Matt Guy, at right, as he prepares to throw in the championship game of the COBS $20K Open Singles Championship at Harrah’ Cherokee Casino Reort in Cherokee, North Carolina. The 22-year-old Crab Orchard resident was the last man standing in the tournament out of a field of 300-400 competitors.

Among the 300-400 individuals vying for the singles’ title was Lincoln County’s own Jordan Langworthy, who is considered one of the best players in the world of competitive cornhole.

Langworthy, 22, of Crab Orchard, has risen quickly in the cornhole ranks and already has an American Cornhole Association (ACO) doubles’ title under his belt.

After Langworthy and Frank Modlin won the ACO doubles’ title in 2015, Langworthy had said, “Hopefully, there’s bigger things to come ….”

One of those “bigger things” came along this past weekend, as Langworthy claimed the COBS Open Singles title live on ESPN2.

When asked by an ESPN2 reporter immediately after the victory how he felt, Langworthy admitted to having mixed emotions.

Looking back on that moment now, Langworthy said, “It felt great. It was amazing.”

It was an all-Kentucky championship game in the COBS Open Singles tourney, with Langworthy taking on Matt Guy of Alexandria, Kentucky, for the title and the $5,000 winner’s payout. Langworthy emerged as champion by defeating Guy 21-14.

“It’s always hard to beat him,” Langworthy said of Guy. “He doesn’t miss hardly ever. He puts a lot of bags in the hole.”

The championship win was the culmination of a sometimes frustrating tournament for Langworthy. The 22-year-old, who is sponsored by All Cornhole, had to fight his way out of the losers’ bracket to claim the win.

“No I definitely didn’t want to be in the losers’ bracket, but losing the second round of the winners’ bracket really motivated me and got me fired up,” he said. “I think I won about 8 or 10 games straight to come back and win it. It was a long road, but I just stayed focused and battled my way back to win it.”

Langworthy admitted that he “choked three or four times” on the road to the title win, but he said being nervous in games had nothing to do with his missteps.

“No, I hardly ever get nervous in tournaments,” he said. “Normally when I mess up it’s because of too much adrenalin or rushing a shot. I just don’t get nervous.”

There wasn’t even any uneasyness in the fact that he was entering the COBS tournament with little to no practice. Langworthy, who has been playing cornhole for six years, takes the sport seriously and he typically practices for a couple hours four to five days a week, but that wasn’t the case heading into the tourney.

“Going into this Worlds I hadn’t practiced really any,” he said. “And I played better in this one than I had in any before.”

Practice is at a minimum for his next tournament as well, with Langworthy heading right back into competition in the ACO World Championships of Cornhole XII, at the Owensboro Convention Center July 25-29.

“We are heading to another Worlds Cornhole Tournament in Owensboro right now,” Langworthy said by telephone. “We’re traveling all the time. It (competitive cornhole) is a year-round thing.”

While the tourneys and travel can be long and tiring, Langworthy wouldn’t have it any other way.

“It can wear you out, but I love it and I have fun,” he said. “If you’re not having fun, then you shouldn’t be doing it.”