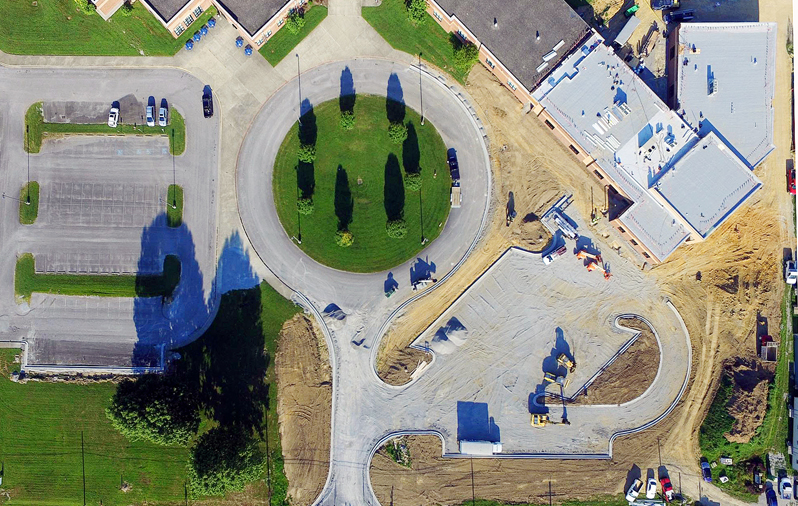 STANFORD – School board members approved a change order for the Stanford Elementary construction project to address a drainage issue on the bus loop – the cost is not to exceed $39,300.

Justin Lane, project manager for Trace Creek Construction, brought the board up to speed on the status of construction during a special-called July 17 meeting.

“We’ve made some pretty drastic improvements here lately,” Lane said. “We’re still on track to meet that deadline of October. Right now we’re shooting for the end of September to give us time to get you all moved in and also get the punch-list items done, so there’s not a rush there at the end.”

Lane said he hopes the weather will cooperate with the crew for the next couple of weeks.

When students arrive at school, Lane said the paving in front and back, as well as all the sidewalks, will be done and seeding and straw will be down.

Russ Downey, of AGE Engineering, addressed an issue discovered during the construction that required the board’s approval.

Downey said the bus loop used to drain to where the new building currently sits and will need to be rerouted.

“We’re proposing is that we mill the surface of the bus loop in various different spots to create kind of a uniform around the bus loop to change it to what it needs to be now and not what it was originally built for a long time ago,” Downey said.

By milling certain depths in different places, Downey said the water will drain to the middle box in the island area rather than toward the building.

“Now everything has to go there because you can’t go out through that old building and that old entrance,” he said.

A change order in the amount of $39,300 was requested to correct the drainage issues on the bus loop.

Board member Alan Hubble asked why the issue was just now coming up if a surveyor was paid.

“I think the original scope was to avoid messing with the bus loop any more than we had to,” Downey said.

Lane said he’s not happy with the numbers either.

“The price they came back to me with last week was $45,000. We’ve been beating on them ever since then and we’re down to $39,300. We still think that’s a little high, but I need to get work done. There are unit prices in the contract that just need to be verified, so we can manage this in unit prices installed and unit prices taken out. The thing we don’t have unit prices for is the milling.”

The change order request is an agreement not to exceed $39,300 in the construction.

“We’ll verify quantities and only charge you for what was actually done,” Lane said.

Lane said some of the cost is off-set by savings in other areas of the project.

Board member Marvin Wilson asked who was responsible for not foreseeing the issue.

“I would refer back to AGE but I don’t like to throw anybody…” Lane said.

The board unanimously approved the change order.

“I”m saying no more than $39,000 and I’m trying to push the number down more with using the unit prices and verifying quantities in the field,” Lane said.