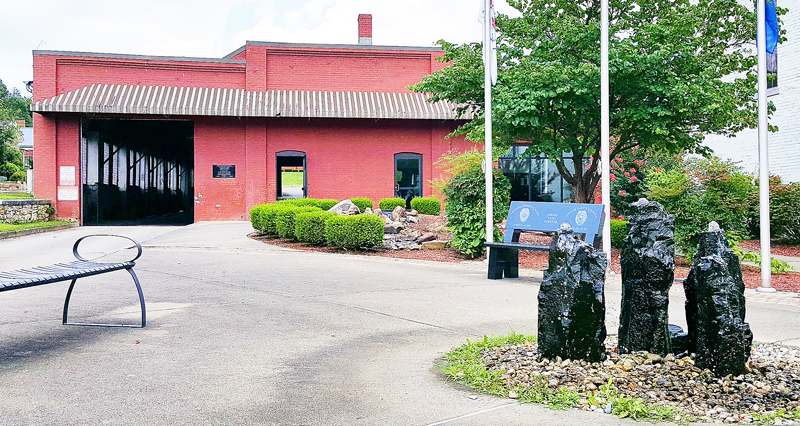 Photo by Abigail Whitehouse The Stanford City Garage was the center of discussion during the city council’s regular July 6 meeting.

STANFORD – A town hall meeting was scheduled last Thursday to discuss a potential lease agreement between the city and First Southern National Bank but the bank’s decision to rescind it’s proposal prior to the meeting led to accusations against the mayor by council members.

“We just got news just a few minutes ago that the bank backed out of the deal,” said Mayor Eddie Carter. “We thought we had everything worked out but they decided they don’t want to go with the lease agreement with the city.”

The original proposal offered by FSNB was a five-year lease of the city garage – with no plans to interfere with the parking part of the structure, only the museum in front of the building.

The bank proposed a $1 per year rent and in return would invest $10,000 over the five-year period for maintenance and repair of the entire building, and cover the additional cost of renovating the museum to house 4 Generations, a local ice cream shop.

Carter expressed reservations during the city’s regular July meeting and the council agreed to hold a town hall meeting before giving approval. Some residents in attendance were upset to learn that the proposal was no longer on the table.

“Where are we going to get $25-35,000 to make that building safe, to stop the budging walls, to fix the leaking roof, to fix the lights, to restore the museum to where you can actually put stuff in it that won’t be damaged,” said Dalton Miller. “Where are we going to get that money? Because if the city’s not broke, all of our police cars are. I just want to let you know that.”

Farris Marcum asked what reasons were given for rescinding the proposal.

“We thought, up to a few hours ago, that everything would work out. We tried to be fair to them and fair to the city,” Carter said.

“It was the compound effect of going back and forth and adding four different revisions over everything. I can’t speak to one separate thing…” Reed said.

Councilman Scottie Ernst said the bank rejected the final agreement because there were too many stipulations added by the city.

“It was getting to be where you, the mayor, was going to micromanage what they could do and  could not do – anything they wanted to do…that was one thing,” Ernst said.  “You went to Jess (Correll) and told him that the council was not interested in the deal whatsoever.”

“I did not tell him that,” Carter said.

Ernst continued, saying the article that appeared in The Interior Journal put a negative light on FSNB.

“They did mention the newspaper article today showed a negative light on them and they don’t want that, they want to try to help this city and do things for the city,” Ernst said. “They just felt it was best, with the negative light, just to bow out at this point.”

Ernst accused Carter of going behind the bank’s back and attempting to strike a deal with the owners of 4 Generations to lease the museum area of the city garage from the city.  Carter disagreed.

“Jess (Correll) told me, he said ‘you bring it to them…’ I don’t care whether you believe me or (don’t) believe me,” Carter said. “That’s what he told me and I went to Joy (Ruckel) and said ‘Joy, will you meet me and just go over what you might want. Jess told me, ‘Look, you all rent it to them,’ said ‘that’s fine by me.’ That’s the truth, I don’t care if you believe it or not. If Jess were here he would tell you that. I didn’t go behind nobody’s back.”

Ernst said it was a good deal for the city and taxpayers and accused Carter of messing it up.

Councilwoman Sara Givens attempted to reign the meeting in, using her name plate as a gavel, when members began arguing.

“The final draft was today at 3 o’clock because you kept going back and forth, changing and adding things,” Ernst said to the mayor. “They got tired of it and so they backed out on the deal. You don’t want to hear it, but it’s the truth.”

Miller asked if he could request copies of the ongoing lease agreements to see what changed from the first to the final agreement.

“Open records only applies to finished documents,” Reed said. “Right now, it’s technically my work product, but the terms are what was announced at the beginning, everything else is just nuanced details.”

Ernst made a motion to place the final lease agreement in the city minutes as record. All council members voted in favor of the motion.