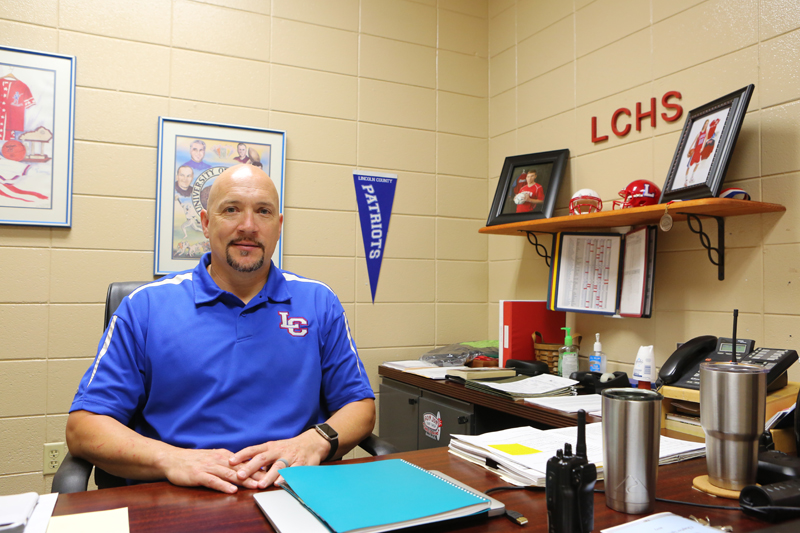 Billy Harris, 49, poses for a portrait in his old office May 15 at Lincoln County High School, where he was an assistant principal. Harris has been named Lincoln County Middle School’s new principal. Photo by Joshua Qualls

STANFORD — Billy Harris’ first official day as Waynesburg Elementary’s principal had not even come when another opportunity came along, and it turned out to be the one of his dreams.

Harris, 49, put his name in the ring to replace Debbie Sims as principal of Lincoln County Middle School when she left to be an educational recovery specialist at the Kentucky Department of Education in Louisville. He got the job June 23 and started July 3.

Waynesburg has yet to find a replacement for Harris, but Superintendent Michael Rowe is helping out with paperwork and administrative duties in the meantime. He expects the school’s advisory council will find one in the next couple weeks.

“The position had come open, and I had always told myself that … if this job ever became available, I would try to get it,” Harris said, noting he would have preferred for the opportunity to come up under better circumstances. “It wasn’t anything that I could help as far as the timing was concerned.”

Harris, born and raised in the area, has spent the past two decades working in the school district, which he used to attend before going to Eastern Kentucky University in Richmond for a bachelor’s degree in middle-level education and a master’s in instructional leadership.

“I’m really happy that he’s going to be our principal,” said former Principal Debbie Sims, whose son will be entering seventh grade this year at an LCMS under Harris’ leadership. “I think our … staff and students are going to benefit from his experience.”

Having spent six years as an assistant principal at Lincoln County High School, Harris took the job at Waynesburg in May without knowing Sims would be leaving the middle school.

“Having been at the high school and seen what he’s done, both on the academic side and on the student discipline, I think he’d be successful at either one,” Rowe said. “But ultimately it had come down to where Mr. Harris felt he’d fit best.”

Before taking the job at the high school, Harris spent two years at the Lloyd B. McGuffey Sixth Grade Center as an academic performance specialist.

He said that role, combined with his academic area of expertise, is what attracted him to working at the middle school.

“I was actually one of the first teachers that helped to open this building,” Harris said. “I taught math here when this building first opened, so it’s kind of like coming home for me.”

Having taught history at Pulaski County High School since 2005, French completed graduate studies in secondary education at Lindsey Wilson College and an education specialist degree in school leadership at EKU in 2015.

“Mr. French is extremely excited and happy to be joining the Patriot family and continuing the high achievement tradition currently at Lincoln County High School,” the release said.