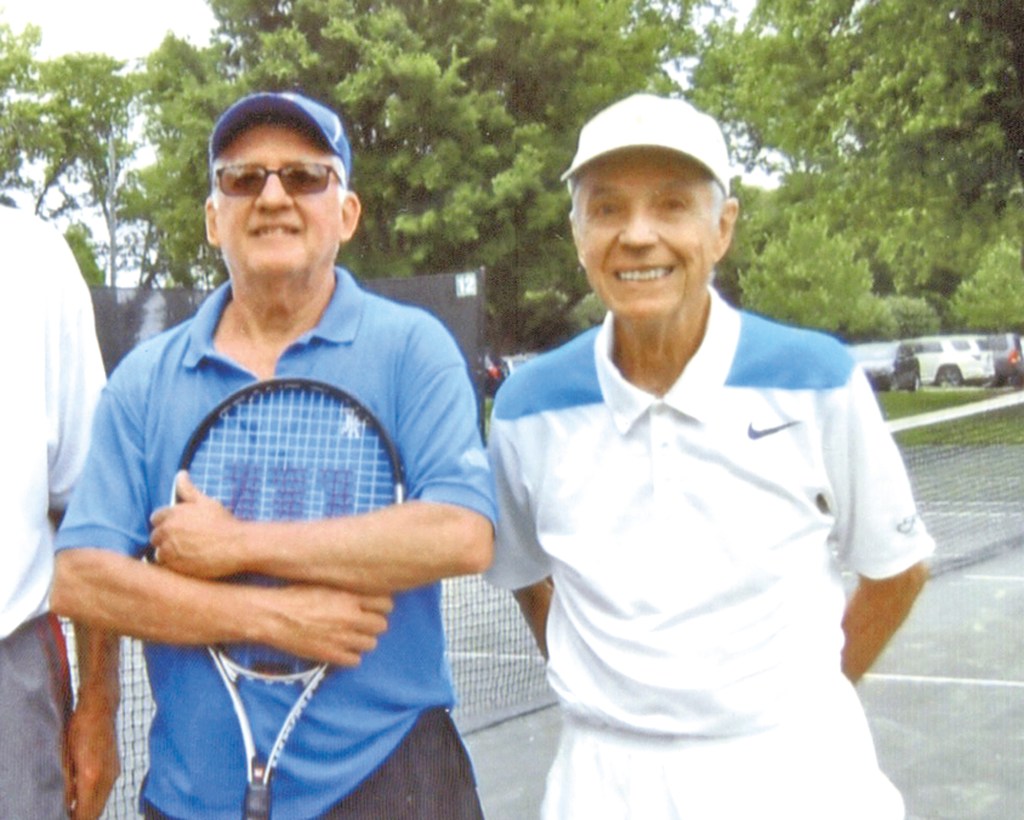 COURTING VICTORY. Henry Baughman, right, and his brother, Jim Baughman, left, walked away as champions in both singles and doubles play in senior tournaments in Birmingham, Alabama, and Lexington.

In the sport of tennis, getting older doesn’t mean the end of competition, with a vast array of adult tournaments offered throughout the year.
Brothers Henry Baughman and Jim Baughman of Stanford are a true testament to the longevity of a tennis athlete, with both competing successfully in 75 & Over divisions. Henry competes in 80 & Over singles, Jim plays 75 & Over singles and the two pair up for 75 & Over doubles tournaments.
And proof of the tennis brothers most recent success comes in the form of a gold medal and three tennis titles. Henry Baughman captured the gold in the Men’s 80 & Over Singles in the 2017 National Senior Games at Birmingham, Alabama, at the beginning of June then closed out the month with a singles victory in the sanctioned Kentucky Tennis Association Tournament in Lexington. Both Baughmans were victorious in the Lexington tournament, with Jim winning the Men’s 75 & Over Singles competition then taking the court with Henry to claim the 75 & Over Doubles title.
In the National Senior Games, Henry had to not only battle some very tough opponents but also illness.
Baughman and his wife, Dr. Jann Aaron, worked a full day on Friday, June 2, at the Hardinsburg (KY) hospital then had to drive all night to get to the Games – and that’s when the illness set in.
“… drove all night to get to Birmingham where I had a singles match scheduled Saturday morning,” he said. “Somehow, I contracted viral pneumonia.”
But the illness wouldn’t keep him off the courts.
“… driving to the tennis courts, I looked at the draw: there was a full 32-draw in the 80 & Over Singles competition!” he stated. “Despite being ill, I won all five matches and earned my ninth gold medal in singles’ competition.”
Henry, the division’s six seed, opened the Games with a 6-0, 6-1 win over Ben Wilkinson in the Round of 32 then followed with a 6-2, 6-2 victory over David Shannon in the Round of 16. He knocked out three-seed Joe Sykes, 6-2, 6-0 in the quarterfinal round then earned his spot in the finals with a 6-2, 6-2 semifinal win over Schwe Pong. Henry took on five-seed Ronald Perdue in the championship match. He won the first set 6-3, only to have Perdue come back to take the second set 6-4, but then Henry clinched the gold medal with a 10-3 superset tiebreaker.
As soon as Henry was presented his gold medal at the Games, formerly known as the National Senior Olympics, and pictures were taken, he and his wife hurried off to board a plane to Greece to attend a wedding. The following day, they were standing on the grounds where the first Olympics were held.
Then he returned home to recuperate.
When it came time to take the courts again for the tourney in Lexington, Henry and Jim Baughman faced an unusual task before they even entered the courts to play – drumming up some competition in the only age-division tourney sanctioned by the KTA in 2017.
“Jim called the tournament director before entries closed and there were no entries,” Henry said. “He told the director he would find opponents for us to play in the 75 & Over Doubles and singles for himself in the 75 & Over division and 80 & Over Singles for me.”
The Baughmans swept all three divisions. Henry defeated Russ Walkup 6-0, 6-0 to win in 80 & Over Singles, Jim topped Jack Vilanti in the 75 & Over Singles (scores not available) and they teamed up to beat Walkup and Vilanti 6-0, 6-0 in 75 & Over Doubles.