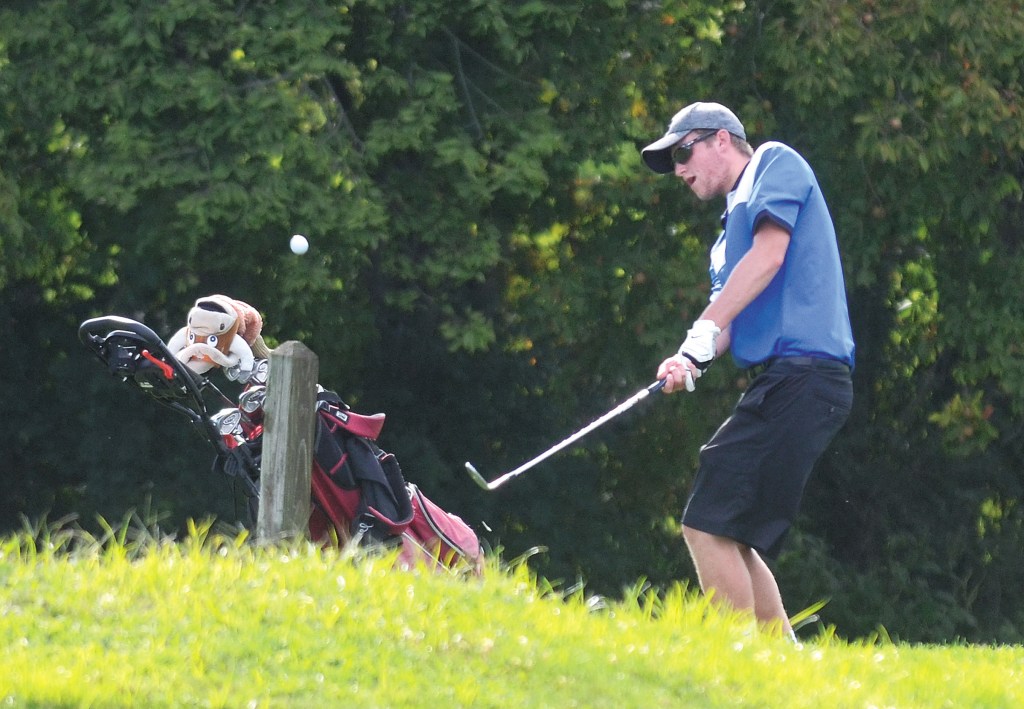 Photo by Nancy Leedy RYAN MONTGOMERY, on course for the Patriot golf team this past fall, will play both a fall and spring season as a member of the Georgetown College men’s golf team.

STANFORD — The curtain fell on the Lincoln County Patriots’ Fall 2016 golf season at the end of September, however, Ryan Montgomery has yet to lay down his clubs.
The recent LCHS graduate may have taken breaks from golf following previous seasons but no more as he readied to take his game to the next level.
“I’ve been prepping pretty hard,” he said. “I never have quit. I play most every day.”
Montgomery officially made that jump to the the next level when he traded his Patriot golf bag for one bearing a Tiger as he signed to play for the Georgetown College men’s golf team.
“Golf is just a game that I truly enjoy and love and I always have, and I always felt like if I could play and use that to help pay for my education, that would be amazing,” Montgomery said.
Montgomery, the son of Scott and Suzanne Montgomery of Stanford, developed a love for golf at an early age, but it wasn’t until the last couple years that he had his eye on the horizon of his future.
“I’ve played competitively since I was 10 years old, but I didn’t really start practicing hard until about junior year,” he said. “I just kind of played until then. I’ve really gotten better, but I think I could have been even better had I practiced harder earlier.”
Montgomery stated that more intense practices earlier in his career could have maybe gotten him a spot on a bigger (school’s) golf team, but he said that really wouldn’t have been his desired school choice.
“I was looking for a small school and Georgetown is that, just a small school,” said Montgomery, who plans to major in finance. “I feel like it will help me grow academically, because it is a good academic school and I’ll have the help and resources I need there versus at a big school I wouldn’t get the same help from the professors and stuff.”
“I looked at other small schools around the area but I think Georgetown is the best for me.”
The recruiting efforts of men’s golf coach Austin Sparks and the fact that the Tigers boast of a winning program also helped to sway Montgomery to the Georgetown campus.
“Coach Sparks is really good at recruiting and they are pretty good. They finish first or second at most all tournaments,” he said. “That’s important. I want to win. I’m not going to go somewhere where I’m going to lose all the time.”
Montgomery, who started playing varsity golf for Lincoln as a seventh-grader, knows he will have to practice extra hard to earn a top spot on the Georgetown golf team — and he’s ready to make that effort.
“The top five play and I’m pretty confident that the first or second year I’ll make an impact and be able to be top five,” he said. “It’s something I’ve got to work for. I’ve played varsity since seventh grade so I’m not used to being at the bottom.”
The Tigers play both a fall and spring season, with 18-hole matches. In high school, Montgomery played nine-hole matches in the fall with occasional 18-hole tourneys. Does he see that as a problem as he moves forward into college play?
“No, I think I’ll be able to handle it,” Montgomery said. “I’ve played in a lot of tournaments, so I have played competitively over 18 holes. It will be different playing 18 holes every match, but I can do it.”