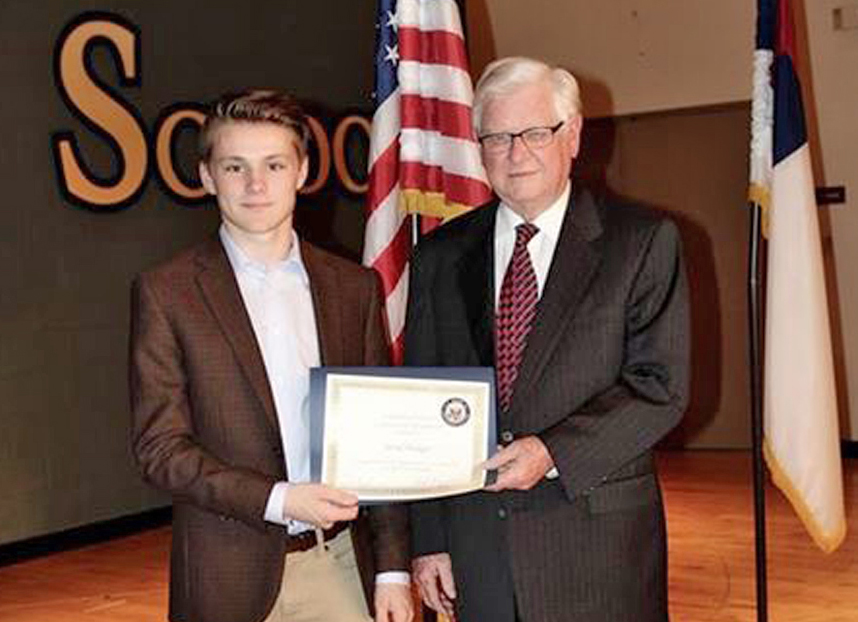 Photo contributed by Barbara Hodges JAROD HODGES, a 2017 graduate of Somerset Christian School, received his appointment to the United States Air Force Academy from Conressman Hal Rogers. Rogers was the one who nominated Hodges for the Academy. Hodges is the son of Albert and Barbara Hodges of Waynesburg.

Jarod Hodges never contemplated a future in the United States armed services, at least not until a friend attended the Naval Academy.
“I discovered the academy through him and it just really interested me when I learned about it,” said Hodges.
Now, Hodges is ready to “Aim high, fly-fight-win,” as he becomes all he can be as a cadet in the United States Air Force Academy.
Congressman Hal Rogers, who nominated Hodges for the academy, was on hand to present Hodges his appointment during a special honors ceremony at Somerset Christian School (SCS).
“It’s certainly an honor to be able to go to the Air force Academy,” said the 2017 SCS graduate. “It’s something not quite like anything else anyone gets to do.”
Hodges, the son of Albert and Barbara Hodges of Waynesburg, excitedly accepted the appointment, acknowledging the future it holds for him – even though he had never been on an airplane.
“I’ve never flown before,” he said, “but it gives me lots of opportunities, lots of things I can do with jobs, military and civilian.”
An appointment to the academy can only be given by United States representatives, senators or the vice president. The opportunity is equivalent to a $400,000 scholarship, and offers students a chance to pursue their college degree in one of the nation’s most prestigious schools. Attendees are held to rigorous academic and physical standards, and must commit to five years of military service.
Rogers told the crowd of SCS students assembled that Hodges had said of his decision, “I want to be pushed to excellence in all that I do. I’ve learned that hard work often comes paired with great reward. I’m willing to do the hard work in order to join the ranks of some of the greatest men and women in the world.”
The Air Force Academy appointment was not the only offer Hodges received, though. Hodges, who maintained an unweighted 4.0 GPA all four years of high school, was offered a Type VII scholarship to the University of Kentucky by the AFROTC.  He had accepted this full ride scholarship prior to the appointment and was intending to attend the engineering school this fall. However, once he found out he was offered an appointment to the Air Force Academy, he decided that was a better opportunity for him.
When presenting Hodges his appointment, Rogers lauded his work with the PRIDE Club, UNITE Club, the Pulaski County Animal Shelter and his participation with Christian Praise bands.
In addition to those good works,  Hodges the “outstanding athlete” also made great strides. He was the 2015-2016 Kentucky Christian Athletic Association (KCAA) cross country state champion and was the 2016 overall champion at the Jingle Bell Jog.  He was also on the 2016-2017 KCAA state soccer championship team and was voted as part of the all-tournament team.
Today, Hodges is no longer a “non-flying” member of society. He boarded a plane for the Air Force Academy at Colorado Springs, Colorado, on June 22 for basic training, also known as the “beast.”
Prior to his departure, Hodges trained with Gene Goode at Precision Fitness in order to get ready for the “beast.”

Chris Harris of the Commonwealth Journal and Nancy Leedy of The Interior Journal both contributed to this article.