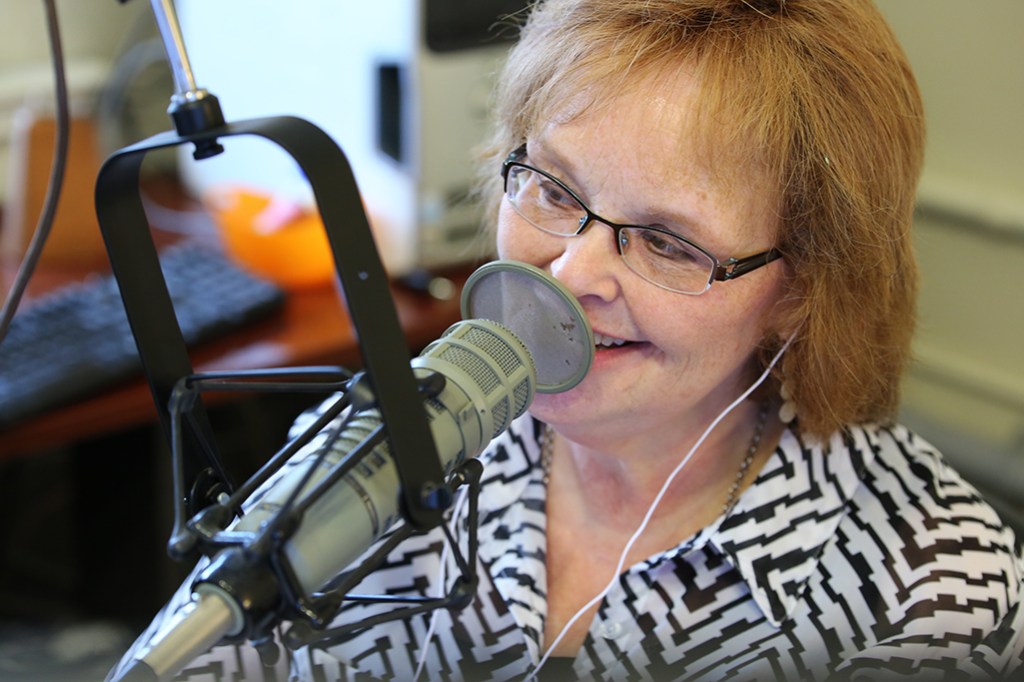 STANFORD — After years of service to the community, “General Store” manager Renee Knies restrained tears with a pensive smile Friday morning as dozens of loyal customers called in to wish her well and to do business with her one last time.

Luckily her involvement in planning the second-annual Cow Bell Days festival had distracted her for the past two weeks, but all the raw, mixed feelings associated with beginnings and ends appeared to preserve themselves for the moments after her last two-and-a-half hour shift at WPBK-FM.

So, when her husband, Walt, walked in at 11 a.m. and all had been said and done, 16 years of memories on the radio hit Knies like a freight train.

“When I saw him, I just started crying,” she said.

Knies, 57, of Stanford, recently decided to resign from her position at WPBK-FM and hand off her duties on the station’s most popular show to take on a new opportunity at Heritage Hospice, where she has served as an unpaid volunteer for 21 years.

“I’ve seen the difference it makes in people’s lives,” she said, noting her work at the station has been fulfilling but her passion is in hospice care. “You’ll never stop death, but you can make the time you have left the best it can be — and I’ve been able to do that as a volunteer.”

WRSL-FM station manager Norb King hired Knies to answer phones part-time for the office in 1997, but she proved to have a “good voice for radio” during her first day on the job, worked her way up to an on-air position and started to answer phones full-time on the General Store within just a few years.

That station became WXKY-FM in 2001 and was later sold in 2006 to the Educational Media Foundation, a nonprofit company that operates K-LOVE, Air1 and Radio Nueva Vida.

Following the sale, Knies began a promising three-year apprenticeship at Fox Funeral Home to become a funeral director, coming close to being within a year of completing the program before she received a surprising call in Sept. 2007 and changed course once again.

Former WRSL owner Jonathan Smith had made arrangements with the Federal Communications Commission and was ready to bring his family’s radio enterprise back to Stanford — and he wanted Knies at the helm of his brand-new station.

“I was shocked because I didn’t even know it was a possibility,” Knies said. “My parents always taught me I could do anything I put my mind to, so I thought, ‘Yeah, if somebody else could do it, I could do it.’”

Having had a productive working relationship at the previous station, Smith knew she was the right person for the job — she could do clerical work, manage advertisements and talk on-air, a rare combination and asset to an employer who owns 16 radio stations in two states. The opportunity also seemed like a no-brainer to Knies.

“She was an absolute natural at it,” Smith said of Knies’ work on the General Store, noting she was also skilled at handling the managerial aspects of the business. “I’ve heard scores of people that have hosted those kind of call-in trading shows, and no one comes close to being what Renee is on the air — she has just the perfect personality for it.”

The task was daunting — Knies could never have expected a career in radio before she got a job at WRSL anyway, so launching a new station seemed like starting all over again “without a book,” she said. “But radio is what I loved.”

She not only had to manage the station and host the General Store but also pick music for the first time, which had been handled through a satellite network before.

Though she was a vocal major and a piano minor at Eastern Kentucky University, the type of music she studied and created was quite different from the rock ‘n’ roll hits, blues legends and country classics that one might expect to hear on her now-former stations.

“I was in music, but it wasn’t exactly radio music,” she said. “I couldn’t have told you who Billy Joel was.”

Picking the music wasn’t such a big deal, though, especially since she began to learn more about those types of music in 2003.

That was the year she met Walt, a guitarist originally from Chicago who is known for having eclectic taste and an expansive knowledge of music.

They got married two weeks after they met, and they have been happy together ever since.

“He can tell you what color underwear the drummer wore when he recorded something,” Knies said. “(Walt has) really opened my world up to a lot of different music.”

But love, success and a new knowledge and appreciation for music aren’t all she’s taking away from WPBK.

“I’m serious when I say I love Stanford,” she said, adding that she will stay active in the community and never wants to retire because of the importance of giving back. “I want to see it grow.”

Smith’s brother David has taken over duties on the General Store as of Monday, and Walt Knies will continue producing his “Buried Alive in the Blues” show on Monday nights and hosting WPBK’s programming on weekday afternoons.