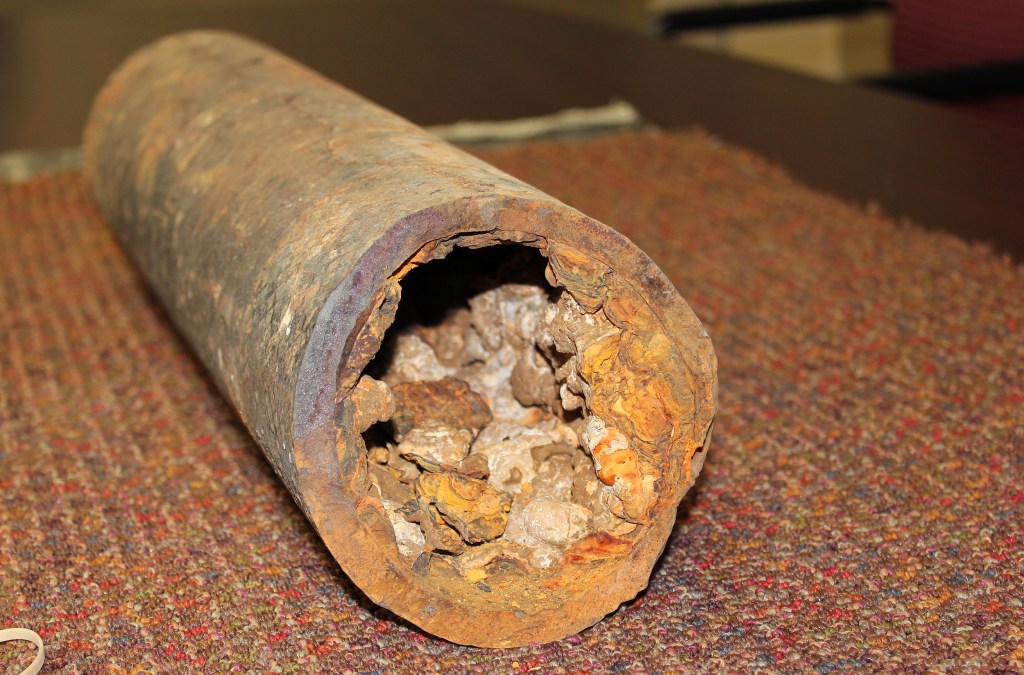 Photo by Abigail Whitehouse A piece of deteriorated cast iron waterline sits on display during a special-called Stanford City Council meeting May 23. The meeting was held to discuss the city’s $4.1 million waterline upgrade project and rate increases needed to secure available grant funds.

Representatives from Kenvirons, a civil and environmental engineering firm out of Frankfort, gave an overview of the project during a special-called council meeting May 23 at the Stanford Water Department.

With a portion of an original, unlined cast iron water line displayed on the table, Engineer Brandon Hamilton reviewed the necessity of the project, which would replace over 75,000 feet of water lines and construct 5,000 feet of new water lines.

It would also replace the eight-inch, cast iron transmission line installed in the 1950’s, which carries water from the water treatment plant into town, with a new 12-inch water line.

Hamilton said in 2013, the city received notification that it was in violation for exceeding the allowable amount in the water system.

With the deteriorated state of Stanford’s water lines and availability of $2 million in grant funding, Hamilton said now is the time to move forward with the project. In order to meet requirements of funding agencies, a 6.9 percent increase in water rates and 22.99 percent increase in sewer rates is needed.

Hamilton said a study of audit reports, system assessments and assumptions was used to determine the proposed minimum rates, with consideration given to the impact of new rates and comparison with other cities’ current rates.

“This is an instance where one of the funding agencies (mandated) that water and sewer be separated and that both of those utilities generate enough revenue to stand on their own. So that’s something that we looked at. Even though this project does not address any sewer lines, that was something we had to look at to make sure both of those utilities are generating enough revenue to cover their expenses,” he said.

“The Kentucky Infrastructure Authority stipulated the city generate an additional $200,000 per year in revenue in order to take on their funds, their loan. So we had to prove this rate increase will generate that amount without going above and beyond,” Hamilton said.

The project will be funded by multiple sources with a significant portion ($2,690,000) coming through KIA in the form of a 20-year loan with a fixed .25 percent interest rate and additional funding provided by the USDA Rural Development program and Appalachian Regional Commission.

Revenue from sewer collections in 2016 totaled $601,935. The project requires a minimum rate increase of 22.99 percent in order to generate an additional $138,396 and meet the minimum requirement for proper operation.

“The sewer side of it is just because you’re operating in the red,” said Vaughn Williams, president of the engineering firm. “It’s catching you up on the sewer side. Having said that, you’re still not covering your full depreciation value on the sewer.”

The proposed sewer rates were also compared to similar populations and showed Stanford’s service charge of $25.09 for 4,000 gallons was the third-lowest of the group.

“That’s a big bang for your buck here, to get that many miles (of water lines),” said Stanford Mayor Eddie Carter. “If this can happen, we think our ISO rating, with all the new water pressure and fire hydrants in this area, we might go to a (Class) 2, which might save money.”

Hamilton said it’s rare for a city to receive over $2 million, more than 50 percent of the total project cost, in grant funding.

“This is the most you can get, so you all have become eligible based upon the condition of your system and the lead service connections,” he said. “There are a lot of funding agencies that hear that word ‘lead,’ they’re familiar with Flint, and they want, in our state, to get rid of any lead connections that may be out there. It’s a great time to do this project.”

Construction of the new lines can begin after final approval is received from the Division of Water and funding agencies, advertisements are placed, bids are in hand and bonds are established, he said.

Williams estimated construction of the project to begin around the beginning of next year.

“The good thing about this project is we’re going to be replacing line that is actually two inches on some streets that don’t have any fire hydrants,” said Ryan Owens, Stanford Water Department manager. “So we’re going to a six-inch with new fire hydrants and that’s what Eddie was talking about with the ISO rating.”

The quality and pressure of the water will be improved by looping lines in some areas, Owens added.

“Our main goal in this project is to eliminate lines like that,” Owens said pointing to the corroded cast iron line on the table, “and to get rid of the lead services.”

The project will address the bulk of water line issues for the city, Owens said, but a second phase will be required to complete the upgrade of some remaining lines.

• Appointed John Hester to the code enforcement board for a three-year term.

• Appointed George Pennman to the code enforcement board for a two-year term.

Editor’s Note: The council approved second readings of the water and sewer rate increases during their regular June 1 meeting.