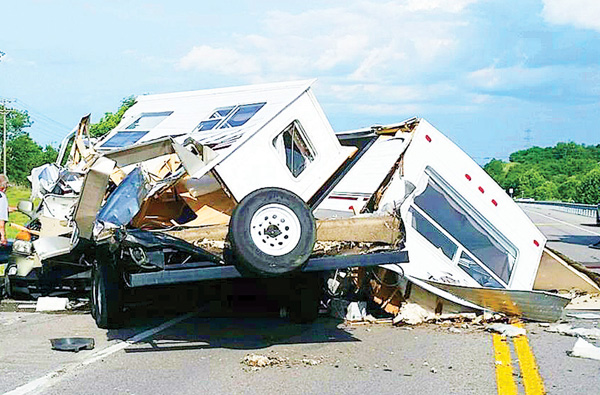 STANFORD – A Lincoln County man was killed after a camper broke loose from a truck and collided head-on into an SUV Monday evening.

Lincoln County Coroner Farris Marcum confirmed Wednesday that the driver of the SUV, Scotty Ray Young, 29, of Crab Orchard, was pronounced dead at the scene at 6:10 p.m. after the collision on U.S. 150 and KY 1770, near Preachersville Road.

Marcum said he was on scene for about three hours Monday night. Kentucky State Police also sent a trooper to the scene to conduct an accident reconstruction.

The truck driver was identified as Wesley Morgan Penn, of Louisville. He was accompanied by his father, Bradley Penn, of Frankfort, and the two were on their way to Laurel Lake for a father-son camping trip when the camper detached from the truck, Marcum said.

“(Wesley Penn) had bought the camper a few months ago and they were very excited about going camping, and they put new tires on it and got everything in pretty good order,” Marcum said. “He said he heard a pop and he looked in the sideview mirror and saw the camper off to the side.”

“The camper struck the front of the vehicle and it just kind of imploded upon impact,” he said.

“There was a guy who stopped and helped her (Owens-Young) get out of the car and her motherly instincts kicked in, and they busted the windows out and got the other two little kids out,” Marcum said. “She had multiple cuts and bruises on her and she had a little laceration on her face. She’s since been released from the hospital. The three-year-old was up and walking around at the hospital Monday night.”

A go-fund-me page has been set up by the family to support six-month-old Colt Shaffer and can be found at https://www.gofundme.com/colt-tuff-shaffer.