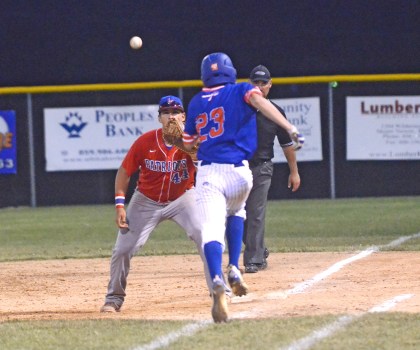 Photo by Nancy Leedy LINCOLN FIRST BASEMAN Sawyer Carrier has his glove up ready for the ball as Southwestern’s Jeffrey Madden charges the plate in the fifth inning of Monday’s 2-1 win. 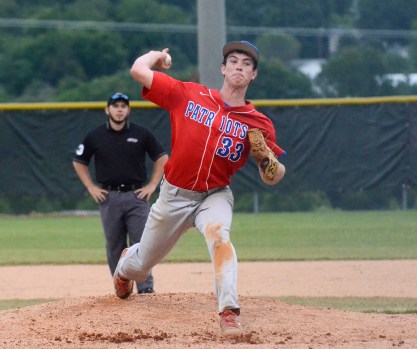 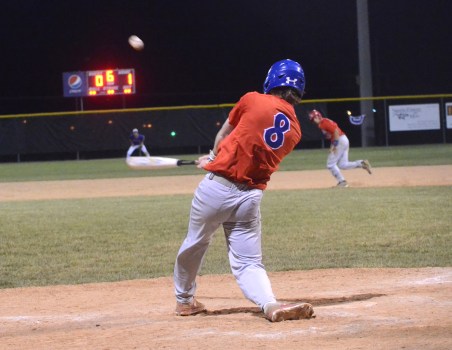 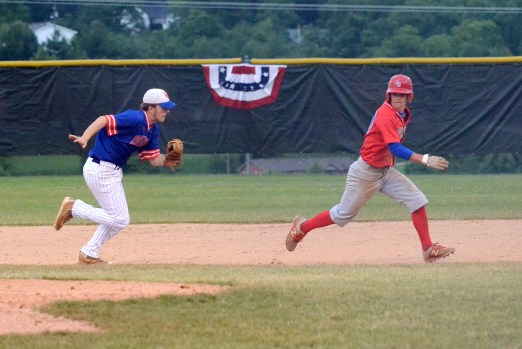 MT. VERNON — For the past few seasons, the Southwestern baseball team has been considered one of the teams to beat in the 12th Region, making it to the championship game three out of the last four years, winning it all in 2014.
And the Warriors looked to once again be one of the favorites in the 2017 12th Region Baseball Tournament, with the 48th District champions coming into the tourney with the region’s best record of 26-6.
But there will no more games and no return trip to the championship game this year for the Warriors. They are done.
The Lincoln County Bat Patriots eliminated Southwestern Monday night at Rockcastle County, stunning the Warriors 2-1 for their first regional win since 2006.
“Great win!” Lincoln coach Tee Ellis said. “In baseball, any given day any team can win. The record didn’t matter tonight. We just came in and played with confidence and we got the win.”
Monday marked Lincoln’s first regional appearance since 2012. That same year was the last time, prior to Monday, that Southwestern was knocked out of the tournament in the opening round.
“We had a great pitcher on the mound with Noah Horton,” Ellis said. “He did his job and we made some great defensive plays behind him. We put the ball in play, put the pressure on them. They made a couple mistakes and we were able to come out with the win.”
Horton earned the complete-game win, giving up just one run off two hits and two walks. He had five strikeouts.
“It feels good. I love it. I love the atmosphere,” Horton said after the win. “They were No. 1 in the region. We knew we just had to go out there and deal. Throw strikes. Get outs. We did it and it feels great.”
Fans sat through 4-½ innings of scoreless baseball before a single run was scored. Southwestern plated the first run of the game in the bottom of the fifth inning. Jordan Smith reached on an error to lead off the inning then moved around to second on a Jeffrey Madden ground out. Smith completed his trip around the bases when Tanner McBryde tagged an RBI-single to right field for the 1-0 lead.
However, Southwestern’s lead was shortlived. Lincoln (14-19) edged on top 2-1 in the top of the sixth inning, aided by a couple Warrior errors. With one out, the Bat Patriots’ Luke Smith and Cooper Brown both earned a base on balls. A dropped fly ball allowed Smith to score and a misplayed ground ball allowed Brown to cross home plate to give Lincoln the one-run lead.
When the ground ball bounced up off the glove of Southwestern second baseman Brandon Pruitt allowing Brown to score what would be the winning run, the disappointment was obvious in the Warriors’ body language. Ellis said that worked to Lincoln’s advantage.
“The disappointment you saw in them, we feed off that,” he said. “You want your kids to feed off that and they did.”
Lincoln gave Southwestern little opportunity to make up the run, with the Warriors going down 1-2-3 in the bottom of the sixth inning and just four batters coming to the plate in the seventh before Horton struck out Daniel Walden to strand a runner and end the game.
The win advanced Lincoln to the semifinal round where the team would play Somerset. The Briar Jumpers moved into the semis with a 9-2 win over defending regional champion West Jessamine.
Madden took the loss for Southwestern, giving up two runs off three hits and four walks. He had four strikeouts in 5-1/3 innings on the mound. Bryce Russell came on in the sixth after the go-ahead run scored. He gave up two hits and had two strikeouts.