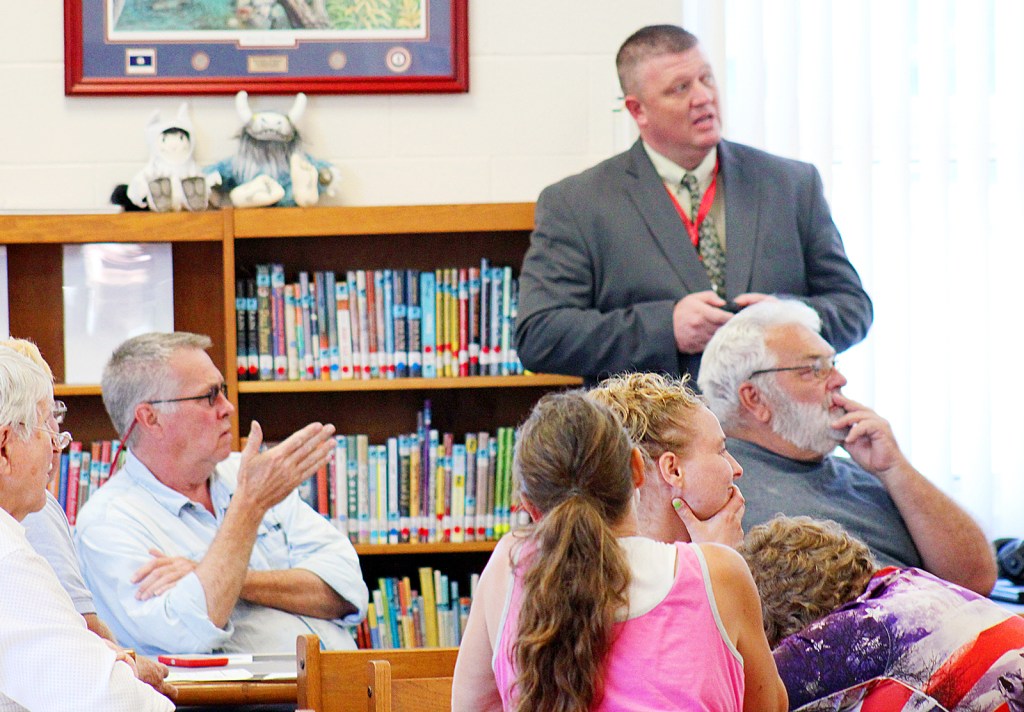 Photo by Abigail Whitehouse Lincoln County Superintendent Michael Rowe answers questions from the public during a town hall meeting held at Waynesburg Elementary. The meeting was the last of several held throughout the district to discuss a proposed recallable nickel tax.

The meeting drew the second largest crowd of the series of town hall meetings held this month.

Rowe said this year could be the last chance for the district to obtain the $10.7 million match by the state.

While there has also been discussion of consolidating some elementary schools, following a facilities plan approved by the local planning committee, Rowe reiterated last Tuesday that the recallable nickel tax and consolidation are two separate items that require a vote by school board members.

“Our board has not committed to anything, I want you all to know that. But the board is willing to listen because of this matching amount; $10.7 million is something that is hard not to think about committing to,” Rowe said.

The plan also calls for construction to expand kitchen, administrative and custodial receiving areas expected to cost about $1.2 million to bring the school up to code, according to Rowe.

As it stands, the school district is carrying about $30 million in bond debt, $4.9 million of which is attributed to Waynesburg Elementary – a surprise to several who attended last week’s town hall.

On the nickel tax

“Some of this has been enlightening to me, especially the fact that we owe so much money,” said Paul Hall, who then thanked Rowe and other school district officials for visiting the area to share information.

Janice McAninch, who works in the school system, said she wants the best for students but as a property owner in the county, she doesn’t want to pay more taxes.

“It’s going to fall on people like me whose grandchildren are out of school already. Because I do love kids, I don’t care to put out a little extra,” McAninch said. “I would really like for the tax to fall equally, but ,with all that said, you’re not going to please everybody.”

Waynesburg resident Jerry Lay said he’s tired of half of the county being asked to carry the load every time more money is needed.

“I’m tired of every time you want money, it’s about half of the county that winds up paying it,” he said. “We pay for your mistakes. I understand things are tight but why do I see custodian and maintenance men taking home district vehicles?”

Rowe said that is an issue currently being addressed and that vehicles are only to be driven home when an employee is on-call for the entire district.

“You’re more likely to get my support if I think you’re spending the money wisely,” Lay said.

“When I first started at Crab Orchard Elementary School, I had a tremendous amount of Title I funds to take care of a lot of things. Those funds are starting to dwindle away,” Ward said. “Those came from the federal level. So then, our state started to say ‘We’ve got to keep those services up’ so they would mandate things to take place in the school district and then say ,‘All right, since we can’t fund you, you take care of yourself inside the local district.’”

Gloria Sneed said she wants the best fire department, ambulance, library and hospital, all of which requires more tax revenue.

Rowe said revenue generated by the nickel tax can only be spent on four things: paying off bonds; new construction; renovation; and, with approval from the Kentucky Department of Education, to purchase land for a new building.

“This is my community. I’ve been in Waynesburg for 35 years and I came and looked at the school before we even looked at a house,” Sneed said. “I’ve got a lot of sweat and blood and tears here…and we don’t want our school gone. We want our money spent right.”

Fiscal Court Magistrate Johnnie Padgett reviewed cuts the county has made in order to prevent raising property taxes and said the school district’s existing debt is what seems to bother most people he has spoken to on the matter.

“This is the most democratic way to raise taxes,” Padgett added. “We have a representative that we can voice our opinion to.”

“I also want to say how important it is for a school to be in a community and what it will lose as a community in the absence of this school,” Hall said.

Others voiced similar concerns saying if the school goes, so goes the community.

Board member Theresa Long reassured attendees that the board is taking all opinions and input from the public into consideration.

“Just because, let’s say, this recallable nickel gets passed, we’re not saying we have to spend the money shutting the school down,” Long said. “That’s a whole other topic down the road. This money is for fixing our buildings….We have no money to fix.”

Long said support of the nickel tax does not necessarily mean support of consolidation or the closing of schools.

Norma Lay, also a school district employee, fought tears as she told Rowe she has witnessed the aftermath of a community that lost its local school.

“I’m from a community that lost our school, Broughtontown Elementary School. So, I don’t want to see another school lost. Your community dies. There’s nothing there and I just hate to see it,” she said.

Cindy Wesley said when a school closes, property values in the area fall.

“It’s not the building I send my kids to school for ,and I just don’t want to lose it,” she said.

Waynesburg teacher Jenny Schuler explained some of the ongoing facility issues the school faces on a regular basis.

“For those who don’t spend much time in this facility, we have a rodent problem. We have asbestos tiling and flooring and bulletin boards distributed throughout the building,” Schuler said.

Buckets have to be set out when it rains because of roofing leaks, toilets back up and have to be fixed and monitored frequently by custodians, and, the heating and air is inconsistent, she added.

“There are a lot of things that need to be repaired and need to be addressed in the coming years,” Schuler said. “I don’t want to come off as ungrateful for our facility. I’m just saying that maybe this proposed tax could be better spent to renovate the facilities we have and pay off some of this debt that is so alarming to our community.”

With a child in need of special education and accommodations, Lisa Fight said, after trying a few different schools in the district, she found Stanford Elementary was the only facility that could accommodate her child’s needs.

“I am for the nickel tax because I want a facility that will protect my child and give him the education that he deserves,” she said.

The board will vote on the nickel tax June 8.