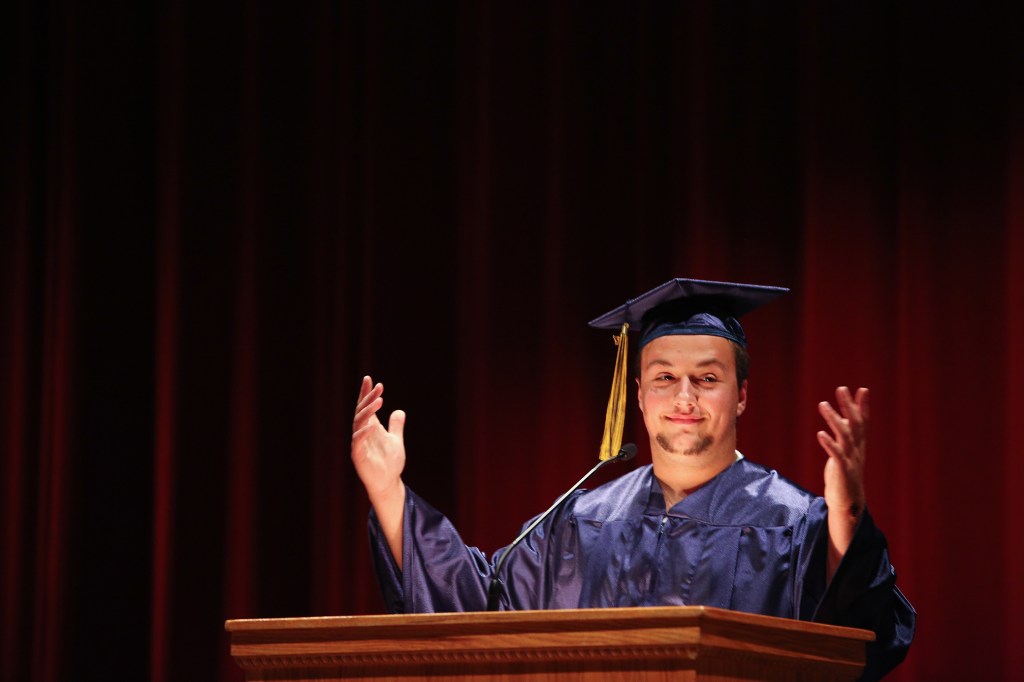 Brayden Smith, 17, goes off script and earns laughs Monday while describing how he feels about graduating from Fort Logan School during his commencement speech at Lincoln County High School in Stanford. Photo by Joshua Qualls

Graduates marched into the auditorium to fanfare as several parents and family members met them at their entrance, cameras flashing as the traditional “Pomp and Circumstance” played overhead.

Having consulted the internet for inspiration, Montgomery began by telling the audience he had struggled for a few days coming up with words of wisdom to impart on his departing students.

“I got to thinking, and it came to me: ‘What would Millennials do in this situation?” he said, repeating once for effect. “So I pulled out my phone, started a Facebook account, Twitter, Instagram, Snapchat — I tried to get it all in, then I Googled it.”

The audience laughed to a few more jokes, but soon Montgomery took on a more serious tone and talked about how the little things in life can change the world.

“You’ve been taking little steps toward a common goal for 14, 15 years — 14 or 15 years you’ve been traveling this road that gets you to this place,” he said. “It’s a really good thing that you all have continued to put one foot in front of another, a little bit at a time, to get to where you are tonight.”

Montgomery talked about a 2014 commencement speech to the University of Texas at Austin by Navy Adm. William McRaven, in which the speaker said people have to do the little things right if they want to change the world.

“If you don’t do the little things right, you’ll never be able to get the big things right,” Montgomery said, paraphrasing McRaven. “That kind of resonated with me, and I started thinking about how you all have been traveling along this road, you’ve been doing a lot of the things right that you need to do. There’s been setbacks, there’s been obstacles that you have to overcome, and that’s what you all have done.”

Montgomery commended the students for sticking with school and being open to advice along the way, wrapping up by encouraging them to seek help from others when needed, to stay determined about achieving their goals and to help others when the opportunity presents itself.

“You guys can do anything you want to do,” Smith said. “You’ve got to stay on it. Persevere.”

To laughter, Smith told the audience he had written a big speech but didn’t like it too much, especially after the principal covered everything he wanted to say.

“I wish you guys the best of luck in life,” he said. “Always remember: If you’re not first, you’re last.”

Blount, trying to hold back tears, told her story about becoming a mom at 16 years old and staying in school.

“When I first came to Fort Logan, I had 13 and a half credits, and I thought to myself, ‘There’s absolutely no way I can get all these done,’” she said. “My family, my classmates, and most importantly my teachers have helped me be where I need to be today.”

Following student speeches, teacher Eva Rankin presented students as Montgomery handed them diplomas. The principal then certified the diplomas to the Lincoln County Board of Education to cheers from the audience and closed out the ceremony.

“You can do anything that you want,” Montgomery said at the end of his speech before congratulating the class of 2017. “Now all I have to do is tell you to go change the world.”