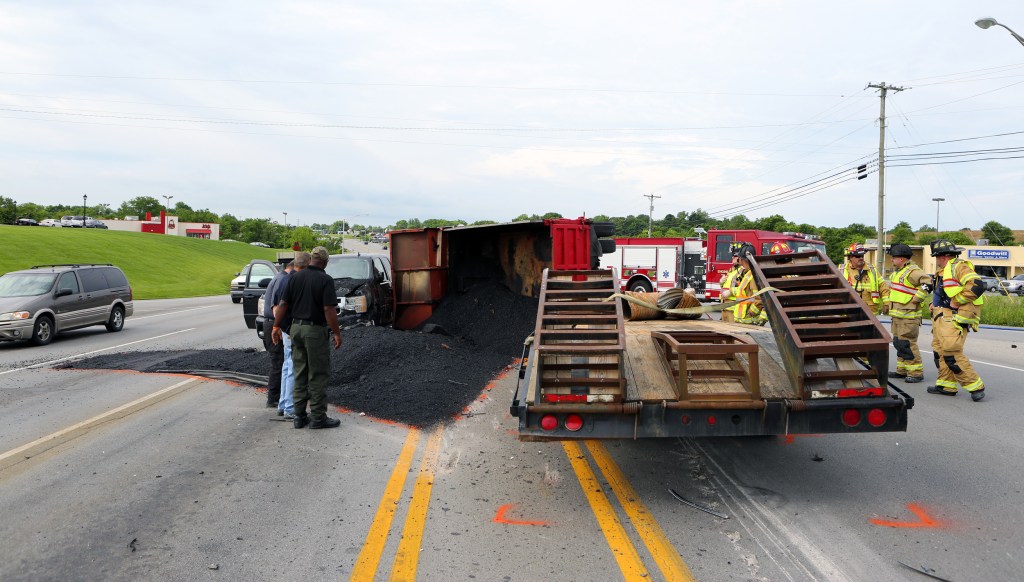 Photo by Joshua Qualls Emergency officials and witnesses survey the aftermath of a collision Tuesday on U.S. 27, just south of its intersection with U.S. 150 in Stanford.

Editor’s Note: This story has been updated.

The four drivers involved in the collision were shaken up, but no one was injured.

Eastbound traffic was deadlocked on U.S. 150 as of press time, but emergency officials were working to clear the intersection as they investigated the incident.

“It’s going to be a while before we clean this mess up,” Stanford Police Chief Zach Middleton said. “But that’s what we’ve gathered so far.”

Michael Rowe, 22, said he was trying to avoid hitting a box truck shortly before the collision took place. “Light turned yellow on me, I hit the brakes, and this truck — the brakes are junk on it. It wouldn’t stop, and, instead of killing that guy, I figured I’d throw it over to the side and not kill him,” he said.

Today was Rowe’s first day on the job for Eric’s Paving, the company which contracted him to drive the truck.

Even though the truck is registered to Eric Boswel of London, Kentucky Vehicle Enforcement is citing Rowe for 26 charges, including eight violations for bad brakes alone, because he was the one driving the vehicle, according to officer Matt Hutti.

Other violations include bad tires, expired tags, and no operating authority; what’s more, the dump truck did not have an annual inspection done and the trailer was not registered.

Hutti said the motor carriers will probably investigate the company as a result of these violations.

“I’m just glad I didn’t kill nobody,” Rowe said. “If you ask anybody that was in the ambulances or anything, I was more worried about everybody else before myself.”

Stan Clifford, 65, collided with the dump truck as he was turning left onto U.S. 27 from eastbound U.S. 150. He said he had a green turn light as the incident took place.

The dump truck also collided with a black Chevrolet Silverado carrying one man and a dog as it flipped over. Trevor Herd, 23, was traveling northbound on U.S. 27 behind the pickup when the dump truck proceeded through the intersection.

Herd said the force of the dump truck pushed the pickup back into Herd’s bumper before he had the chance to get out of the way.

“By the time I looked up, he was up on two tires about to hit the ground,” he said. “I threw it in reverse and tried to back up real quick, but I didn’t make it in time. They ended up sliding into me.”

Herd climbed onto the dump truck and pulled Rowe up and out of the passenger door, he said.

Pickup driver Kinney Noe was at the red light, directed northbound on U.S. 27, as the dump truck tipped over and collided with him. His dog, Arlo, also made it out unharmed.

Editor’s Note: The Michael Rowe referred to in this story is not the Lincoln County Superintendent. This story will be updated as more details become available.

3:48 p.m. update: The intersection at U.S. 27 and U.S. 150 has been clear as of 11:45 a.m. Rowe went to Ephraim McDowell Fort Logan Hospital’s emergency room for minor chest pains and has been discharged.