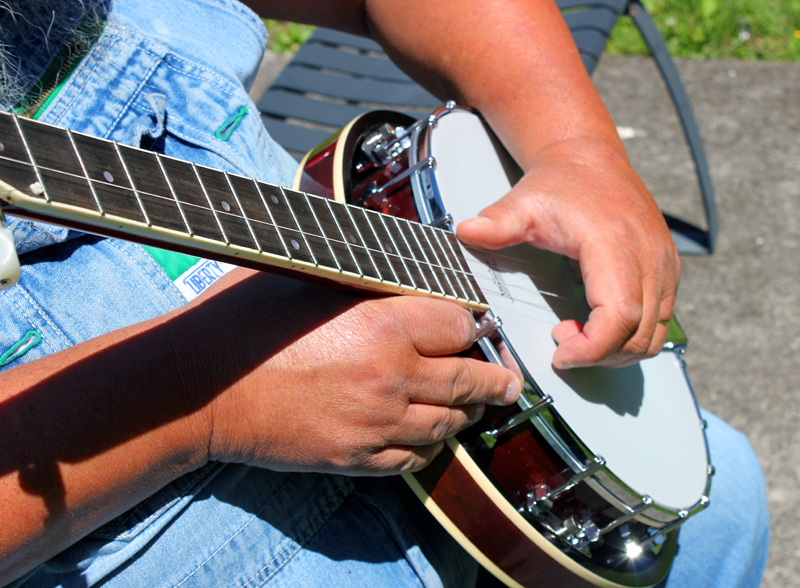 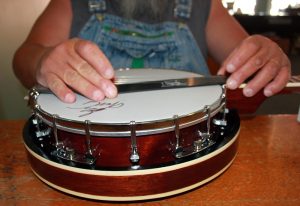 Photo by Abigail Whitehouse
James shows how to use the bridge adjuster that will come with his new “Banjo Neal” banjo – soon to be available to the public.

STANFORD – It was during a Pentecostal church service in Georgetown when Neal James, known today as “ the Banjo Man” first fell in love with the instrument.

“I heard a little old sainted lady playing and that’s exactly what I wanted to do,” he said. “I asked her about it and she said her dad said it was vulgar for a woman to play banjo and she’d sit there on his feet and watch him. When he’d go to work, her mom would get it out for her and let her play it.”

She’s the one who taught James the “clawhammer” banjo style.

James, also known for his debut on the Discovery Channels’ former show “Call of the Wild” was born and raised in Stanford – and it’s where he remains today.

When he’s not helping Ernie Brown Jr., also known as “The Turtle Man” dig critters out of ponds, James is teaching anyone who will listen how to play the banjo.

It’s rare to see James without his banjo and if you stick around long enough, he’ll give you a 60-second lesson that he says will show you how to play hundreds of tunes.

Now, James has turned that 60-second lesson into a product and is preparing to make it available to the world – along with an affordable banjo called “Banjo Neal” styled exactly after his own, with his signature on it.

“That’s the strumming, the chords and everything,” he said. “None of my lessons require that you read music at all.”

“I linked up with some people in Tennessee and they introduced me to Kevin Harrington from Shark Tank. We went to St. Petersburg and I did the sales pitch in his house,” James said. “I thought they’d throw me out but he was just amazed by it.”

Harrington was on board from the get-go, James said.

With help, James found an affordable banjo that could be purchased in bulk for his product and offered to the public without raiding their wallet.

“They built it with a few of my quirks like the spacing of the strings,” James said. “It’s a 22-fret banjo and they put my name on it. It’ll be my autograph.”

The banjos will be packaged with the strings relaxed and no bridge in place.

“The people at the company created a template to use as a guideline on where to place the bridge,” James said. “You have no idea where to put it, there’s an exact location. But if you put the template down in there, it will tell you where to put it.”

Not only will people be able to play a banjo just like James but they will have a plethora of videos online to help guide them through the basics.

“I will have a short video that will show how to do this and also a video on how to take it up to a 440 tune (standard banjo tune),” he said.

James said he had hoped to officially launch the website and new Banjo Neal banjos for order last weekend at the Bristol Motor Speedway but he and his team are currently working dilligently to get things up and running.

“We had it all laid out and had the best intentions in the world but now we’re suffering through the glitches of an ecommerce-bound website,” he said. “My friends and fans have been so faithful and so kind to put up with and to wait for it…very patient.”

When the site does go live, Banjo Neal banjos will be priced between $199-250, he said.

“That comes with the DVD, the bag that the banjo goes in, the banjo, the strings, the bridge and the adjustment tools,” he said.

James said while he will provide all of the essentials for beginners, there will be other opportunities available through the new website.

“I’ll have webinars and we’ll talk about other music an try to learn as many other songs as they want to play and they can make suggestions and I’ll show them,” he said. “It’s kind of an adventure when they join, it’s not just a sales pitch. They get to be a part of me and hopefully a fan club. Maybe I can go to their area and do workshops and seminars with them.”

This is not where the adventure ends, James said, it’s just the beginning.

“There will be higher quality banjos available to them as we find them and find makers and builders. There will also be the son of the late Grandpa and Ramona Jones, Marcus Jones himself, who is going to teach once they advance beyond me,” James said. “He agreed to make lessons available to them at a later date.”

Grandpa Jones was the grandfather of the whole clawhammer movement, James said.

For about 25 years, James said he’s been playing the banjo but he didn’t start playing claw-hammer style until about 10 years ago. It’s a style that people love to hear, though, he said.

“I think it’s refreshing to people to see something that goes back so far in history and something that’s so natural,” he said. “Especially when you play a childhood song that someone learned along the way and it takes them back and gives them an opportunity to forget about their troubles for a minute.”

That’s what it does for James when he plays, he said.

“I think about momma and I think about being a kid hanging out under the apple tree, swimming in the river and all of those things,” James said. “This is grass roots Kentucky, Virginia and West Virginia.”

His favorite song to play is probably one called “Froggy went a’courtin,” that James’ mother sang as he was a child, he said.

“She sang. I never did hear her play the guitar, but they said she was pretty good on the guitar,” he said.

James spends most of his time traveling, raising funds for sick children, playing and teaching but when he’s not doing all of that, he can be found in Stanford.

His time on the Discovery Channel’s Call of the Wild opened a lot of doors, James said.

“Just like this project, the idea of being outside and doing something natural is refreshing to most people. It lets them get back in connection with the way that God intended things to be, to enjoy what he gave us, and not be cooped up,” he said.

In all, James said through all of his travels and adventures across the country, he has always remained proud of his hometown.

“Before I die, I just want to give stanford a reason to be proud of me.” 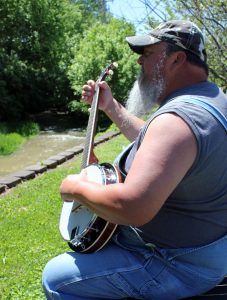 For now the website is www.banjoneal.co. Anyone interested can visit the site and sign up to receive notification when the Banjo Neal banjos are available. James said the official website www.nealjamesbanjo.com is coming soon and should be live in the near future.