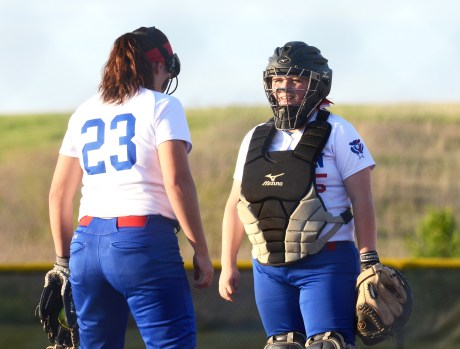 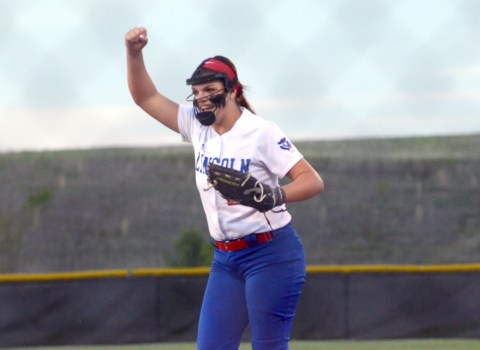 Photo by Nancy Leedy LADY PAT pitcher Sydney Slone gives a fist pump into the air after getting Boyle’s Kacey Lanham to fly out to end the district game.

STANFORD — The Lincoln County Lady Patriots kicked off 45th District play with a win, outlasting visiting Boyle County 5-4 Thursday at Veterans Park.
Lincoln (7-4, 1-0 district) led 5-2 in its district opener after six innings of play. However, Boyle, which came into the game straight off a 7-4 loss to district rival Garrard County, surged in the top of the seventh to challenge the Lady Patriots.
Madison Robbins led off the seventh with a hit off Lincoln pitcher Sydney Slone and, after Channing Whitehouse lined out, she moved to second on a Keely Bowling single. A double to left field by Katy Grace Chadwell drove in Robbins and moved Whitehouse around to third. The Lady Rebels then had the bases loaded after an intentional walk on Gracie Edmiston. Whitehouse was cut down at home plate when Kelly Lay tagged an infield single, but Chadwell would later score on a Danielle Roney bloop hit to make it a 5-4 ballgame.
But Boyle’s hopes of a comeback win were dashed when Slone got Kacey Lanham to fly out to right field. Lincoln’s senior pitcher gave a fist pump into the air when right fielder Taylor Bird gloved the out to end the ballgame.
Slone got the complete-game win, allowing four runs off 12 hits with three walks and six strikeouts.
Lay took the loss for Boyle, giving up five runs off eight hits. She struck out 10 batters and walked one.
Boyle (8-8, 0-2) opened the game scoring with a two-run second inning. Edmiston, who got on base in all four at-bats on two hits and two walks, led off the second with her first hit, a single to left field. She moved around to second on a ground out then scored later on a Lincoln fielding error. Roney, who took base on the error, made it a 2-0 ball game when she scored on a Lanham single.
Lincoln answered right back in the bottom of the third inning, claiming the lead with a four-run effort. The Lady Pats got seven hits off its first eight batters in the inning. Abby Sparkman led off with a single to right and Jenna King followed her on base with a single to left. Both runners scored on a well-placed bunt by Carmen Green. After a ground out, Chyna Dyehouse sent a two-run home run over the left field fence to plate Green and make it 4-2.
Kallie Phillips also reached for Lincoln in the third with a single and stole her way to third base, but she was left on with Lay striking out the next two batters.
The Lady Pats put up the run they needed to secure the win in the bottom of the fifth. Dyehouse connected for a two-out double then scored Lincoln’s fifth run on a bloop hit by Phillips.
******
at Veterans Park