Photo by Abigail Whitehouse A inoperable van, which was removed from a previous residence and deemed a “nuisance” sits beside a dilapidated building in an area behind Stanford City Hall. Stanford Mayor Eddie Carter said the city is working to get rid of the van.

STANFORD  – A study of nuisance complaints filed against city officials from 2014 to present show that some property issues have yet to be resolved.

During last week’s meeting, city council members said they were concerned with the public perception that property issues were not being enforced fairly across the board.

Councilman Ronnie Deatherage said three people had approached him prior to the April 6 meeting to express concern about favoritism among some residents and city officials.

Who was receiving the alleged “special treatment” was not made clear but an open records request by The Interior Journal shows there are a few nuisances on property owned by city officials that have not been resolved.

In 2014, two complaints were mailed and received by Councilwoman Sara Givens, one in September and another in December. The complaints, signed by the code enforcement officer at the time, Larry Nunemaker, detailed an uninhabited property located at 234 Martin Luther King Street which reportedly had junk cars in the front yard, overgrowth of bushes, vines growing into the house, broken windows and piles of brush and tree limbs in the driveway.

A reporter from The Interior Journal visited the property and found the tree limbs were no longer in the driveway but the bushes have doubled in size, windows remain broken and vines are still growing into the home.

Current Code Enforcement Officer Jeff Knouse said the property is still not in compliance and the grass and weeds are now reaching the “12 to 14 inch mark.”

When asked if he had ever instructed code enforcement officers not to serve letters to certain property owners or city officials and family members, Stanford Mayor Eddie Carter said he has not.

Knouse said a second property at 115 Martin Luther King Street, owned by Givens, is also out of compliance but a complaint has not been filed, according to records. 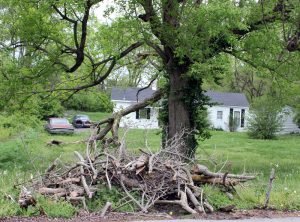 There’s a reason why the two properties’ nuisances have not been addressed though, Givens said Wednesday – because of vandalism.

“The property was in good shape until somebody vandalized it,” she said. “I reported it to the police. They went in, marked up the walls, took all the furniture out, tore the back of it out. It’s going to cost a whole lot of money so I either have to tear the house down or fix it up.”

Just yesterday (April 18), Givens said she filed a police report for her property on Maxwell Street that was broken into a second time.

“I’m just sick of it. I had to call the police yesterday and that’s the second time that house has been hit. At 115 (Martin Luther King Street), they went in the back window, broke it out so now I have to replace a window,” she said. “I can’t afford all this stuff. I’m too old to be going in and trying to fix up things like that.”

Givens said someone threw a rock through a window of the 234 Martin Luther King Street property and broke it.

“I’m just trying to add up the costs,” she said. “Maybe I just need to go on and tear it down. But that’s the reason. All three properties have been vandalized. I’m not just letting it go.”

Knouse said he has served three certified code enforcement letters on Martin Luther King Street this year, two of which are being taken care of and the other referred to the county attorney.

A 2014 complaint was received and signed by Jeff Cain, a current planning and zoning commissioner, for his property located at 102 Darst Street. According to Knouse, the nuisances have since been resolved.

The mayor’s property at 508 Lancaster St. has also received complaints in the past but Carter said he has resolved the nuisances. According to a Dec. 2014 complaint, excessive junk cars, scrap metal trash, and old tires full of water and attracting large numbers of mosquitoes were the main nuisances noted. A property fence falling onto the neighbor’s property was also mentioned. A separate complaint was filed last October.

A portion of property located at 508 Lancaster Street.

Carter said he has since resolved the issues but code enforcement said there are likely still some violations that exist.

“I had an old concrete wall in front of my house up there and I took it all down except a little section,” he said. “I hauled off three or four vehicles that I had back there that really weren’t running. I have a separate business license for that property and have for many years.”

Stanford Fire Chief Scott Maples, who also assists with the city’s code enforcement work, said there have been many comments and complaints from the public about the favoritism.

“It makes it tough to enforce code on citizens when they’re asking questions about why city leaders are not being asked to comply,” he said.

On Jan. 17, Knouse received a complaint about an inoperative vehicle at 114 Pettus Court which was reportedly full of trash. Knouse sent a letter to the owner and the van was cleared out and moved to an area behind Stanford City Hall.

As of April 18, the van was still sitting behind city hall.

“I was going to take it to Crab Orchard and junk it out but we cannot do that,” Carter said in response.

Carter said in the future he thinks the city can call a towing company and have them take the vehicle, store it and charge the owner until they either claim the vehicle or it becomes the company’s property.

“We did get it away from the property and took care of the situation,” Carter said. “I just don’t think we can take a car to the junkyard. I think we’re liable if we take it to a junkyard.”

Moving forward, Carter said he thinks implementing the new state law will rectify any issues or perceptions of favoritism and strengthen code enforcement officer’s ability to bring properties into compliance.

Council members pressed the mayor last week to consider hiring Knouse full-time – he currently works part-time, two to three days a week. Carter said the council will look at the upcoming budget and see if they can afford to bump up Knouse’s hours.

Carter said the city’s recent spring clean-up has been productive, as well.

“We’re seeing a lot of results,” he said. “Our spring clean up is a reflection of what’s already been done around here in the last few months.”

Former Code Enforcement Officer says it takes council, mayor’s support
For several years, Larry Nunemaker served as Stanford’s code enforcement officer and he said no matter how hard he worked, there never seemed to be enough follow-through to get the property issued resolved.

Nunemaker was hired by Stanford’s former mayor Bill Miracle and continued working when Carter was appointed.

“The follow-through is what was wrong,” he said. “I got several things cleaned up and the mayor (Carter) wouldn’t follow through on what needed to be done.”

Nunemaker said despite Carter’s good intentions and love of Stanford, he’s “not going to hurt anybody’s feelings and he’s not going to lose any votes over anything.”

The Cherry property on Lancaster Street, which has been caught up in court for several years now, is one example, Nunemaker said. Properties on Martin Luther King Street were also an issue during his time, as well as abandoned vehicles in the city.

“There are laws on the books that state what you have to do and very few follow through with it,” he said. “It just kept on going to where it seemed political. It was a lot of political stuff, couldn’t step on anybody’s feelings.”

Carter said Wednesday that the council will soon call a special meeting to approve the first reading of an ordinance implementing the new law.

Nunemaker said Stanford is a bigger city than people realize and for code enforcement to be done right it takes someone who can dedicate the time and remove personal and political feelings.

“I think a full-time code enforcement officer that knew the city, knew the people and didn’t want it politicized and fought through that, I think that’s what Stanford needs. But they have to have the backing of the council and the mayor, without that you’ve got nothing,” he said.