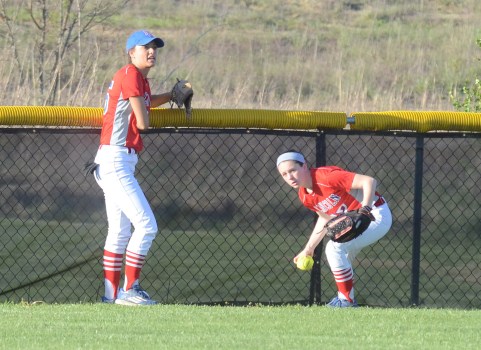 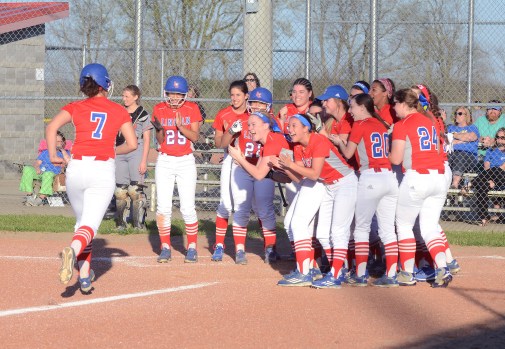 Photos by Nancy Leedy THE LINCOLN COUNTY softball team stands ready at home plate to congratulate teammate Carmen Green (7) after her two-run home run in the bottom of the fifth inning against Southwestern Monday. Jenna King (25) also scored on Green’s homer, the first of two in the inning. Madisen Hinkle hit a walk-off three-run home run to end the game. 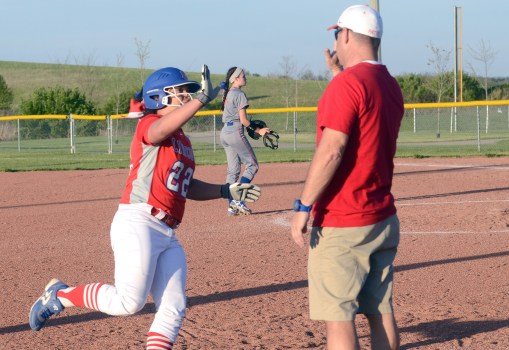 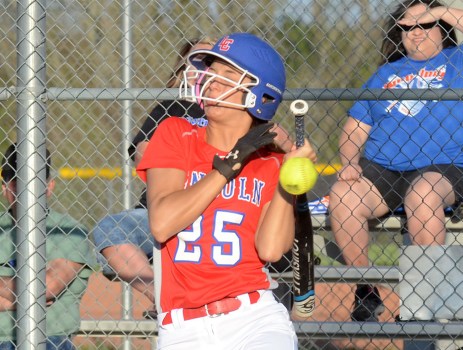 STANFORD — The Lincoln County softball team found a way to score runs early in its 12th Region matchup with Southwestern Monday at Veterans Park, but it was a 10-run fifh that capped the Lady Patriots’ 14-2 win in five innings.
Southwestern threatened Lincoln’s two-run lead in the top of the fifth inning, getting three runners on base. But a double-play took two runners out and one was left stranded with Lincoln starter Sydney Slone getting a strikeout to end the inning.
The Lady Warriors never got to pick up the stick again.
Lincoln sent 12 batters to the plate in the bottom of the fifth and never recorded a third out in the final at-bat, with Madisen Hinkle ending the game via the 10-run mercy rule when she banged out a three-run home run over the centerfield fence.
Lincoln (6-4) connected for nine of its 13 hits in the final at-bat.
“Usually when one bat wakes up the others seem to follow, and that’s what happened,” Lincoln coach Jeff Young said. “It just took us a while to get started today.”
Jenna King was hit by Southwestern’s Kaitlyn Gwin to lead off the bottom of the fifth. She wouldn’t be on base long, though, with No. 2 hitter Carmen Green sending out a two-run home run over the left centerfield fence. Hinkle followed Green’s long ball with a double and, after a Chyna Dyehouse pop fly, she scored on a Kallie Phillips single.
Phillips’ speedup runner Anna Lane and Slone, who reached on an error, later scored on a bunt by Taylor Bird. Bird stole second then came home on a Maddy Boyle hit past short and Boyle made it an 11-2 game when Abby Sparkman drove her in with a single past short. Sparkman was eventually thrown out at home.
The Lady Patriots had runners on second and third when Hinkle stepped up for her second time at the plate in the fifth.  King, who had led off the inning by getting hit, tagged a double in her second swing, then Green laid down a bunt to reach before Hinkle came to the plate and connected for her walk-off home run.
After a 1-3 run in the Gold Bracket of the Tennessee Softball Coaches Association Classic over Spring Break, Young said he had predicted a slow return to the diamond.
“I told the girls that I expected a slow start,” he said. “We had played against such good teams in Tennessee and faced good pitching and they (Lady Warriors) were much slower pitching. I told them it would take them a little bit to get used to the slower pitching. I thought it would take about three innings.”
And three innings was just what it took before Lincoln started hitting.
The Lady Patriots connected for their other four hits on the day in the third inning. Gwin gave up four straight singles to Lincoln in the inning, allowing them to erase a two-run deficit.
King tagged the first single of the third, then scored when Green got a hit. Hinkle connected for an RBI-single to plate Green then Dyehouse followed her on base. Both Hinkle and Dyehouse came on around on an error to put Lincoln on top to stay, 4-2.
“The girls played very mature today,” Young said. “They didn’t let getting behind early rattle them. I was really proud of how they played.”
Young said that the senior leadership provided by King helps add to the maturity of the team.
“Jenna’s leadership is very important to the team,” he said. “All the girls like her and she’s always so positive. She’s just become such a great leader.”
*****
at Veterans Park
S-western    0   2   0   0    0 –   2    3
Lincoln     0   0    4   0  10  – 14  13