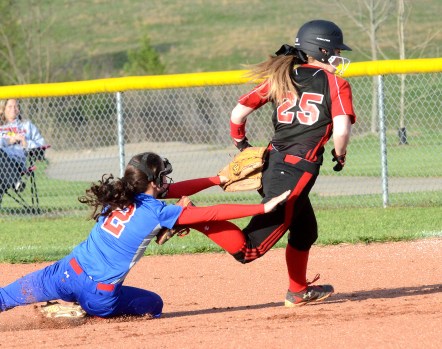 LINCOLN'S Maddy Boyle stretches out to get the tag on Wayne County runner Taylor Bell in a rundown between first and second base. 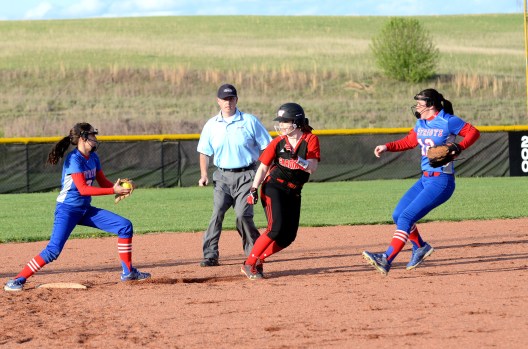 Photo by Nancy Leedy WAYNE COUNTY baserunner Taylor Bell gets caught in the middle of a third-inning rundown between Lincoln's Maddy Boyle, left, and Abby Sparkman. Bell managed to get past Sparkman but Boyle stretched out to make the tag. 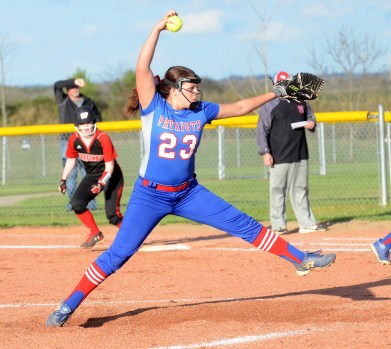 SIDNEY SLONE came up big for Lincoln County on the mound and at the plate in Monday's 12-2 win over Wayne County. She had two hits, including a 3-run home run, and allowed just two runs off five hits with four walks and one hit batter. Slone had nine strikeouts.

STANFORD — The Lincoln County Lady Patriot softball team successfully opened Spring Break week with a run-rule 12-2 win over visiting Wayne County Monday at Veterans Park.
The Lady Cardinals jumped to an early lead by plating two runs in the first frame on two hits, but it was all Lincoln after that. The Lady Patriots (4-1) scored all the runs they needed for the win in a three-run second inning, then boosted their run total by scoring in their next four at-bats for 12 runs on 22 hits in six innings.
“We came out a little flat,” Lincoln County coach Jeff Young said. “Wayne County is not one of the better teams in the region, so we came out just expecting to show up and win. After I got on them a little bit and we got through the first inning, they started concentrating on playing. It took them a few minutes to get their timing down with their pitcher, but once they adjusted we played a lot better.”
Designated hitter Jacque Upchurch paced Lincoln’s 22-hit effort by going 4-for-4 with a pair of runs.
“She’s been hitting the ball good here this last week,” said Young. “She came up big here tonight. I’m happy for her, too, because she had (been ill) so it was good to see her come out and play well.”
Nine Lady Pats had hits in the win, with Jenna King, Madisen Hinkle, Chyna Dyehouse and Kallie Phillips each getting three hits off Wayne County’s Taylor Bell. Abby Sparkman and Sidney Slone tagged two hits apiece, with Slone banging out a 3-run home run in the fifth inning.
“We got a lot of hits today, but to their credit, she’s not their No. 1 pitcher,” Young said of Wayne’s Bell. “They’re No. 1 pitcher is hurt, so we didn’t see their best.”
In the circle, Slone collected a complete-game win for Lincoln, allowing two runs off five hits, with four walks and one hit batter. She struck out nine Wayne County batters.
The Lady Cardinals (2-5) got two of their five hits in the first inning as they posted their only lead. Deshae New led off with a walk then Taylor Bell and Alizabeth Coffey followed her on base with singles. New and Bell both scored on ground outs, but Coffey was left on as Slone got Hannah Jackson to ground out.
Lincoln threatened to score in the bottom of the first, with the bases loaded with two outs. However, Chyna Dyehouse and speedup runners Anna Mae Bullock and Anna Lane were left stranded as Slone grounded out to end the inning.
The Lady Patriots wouldn’t be denied home plate in the bottom of the second, though, with Abby Sparkman, Jenna King and Carmen Green touching all the bases. Sparkman reached on a walk and King and Green both singled on to load the bases then Sparkman came home on a bases-loaded walk to Hinkle. King and Green then followed her home, scoring on a Dyehouse single to left centerfield to put Lincoln on top to stay.
And the runs kept coming the rest of the way.
Upchurch, who singled to reach in the third inning, scored on a King bloop hit to make it 4-2. The Lady Patriots then followed with their biggest inning of the night, a four-run fourth to distance themselves from the Lady Cardinals.
Dyehouse singled on in the fourth then scored on a Phillips RBI-single. Phillips was driven in by Upchurch, who later scored on a Sparkman RBI-hit. Taylor Bird, who reached on a walk, closed out Lincoln’s scoring in the fourth by stealing home on a wild pitch to make it 8-2.
In the bottom of the fifth, Hinkle led off with a single and Dyehouse doubled just before Slone connected for her 3-run home run to left centerfield for an 11-2 margin.
“That was a big hit and it relaxed her pitching a little bit too,” Young said. “It was a big game for Sidney.”
Slone closed out her game and the win in the bottom of the sixth with a walk-off single to plate Anna Mae Bullock.
Young said that the win was not the cleanest of games, but that the Lady Pat team is improving.
“We had a few base-running foo-foos, but we’re starting to clean things up, starting to look a lot better, he said. “Again, the biggest thing with this team’s confidence is believing in themselves. When they start believing in themselves, they are going to be hard to beat. They’re getting there. Hopefully within a week, when we’re playing Boyle County in the district, it will be there.”
Bell took the loss for Wayne, giving up 12 runs off 22 hits with eight walks and two strikeouts.