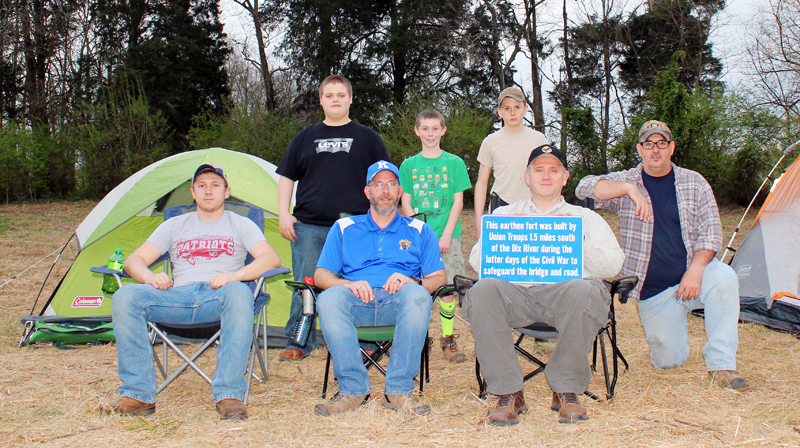 Photo by Abigail Whitehouse Members of Boy Scouts Troop 379 pose for a photo holding a sign that was placed the following day on the historical ground of an earthen fort that was built by Union Troops. From left to right, front row, are Junior Assistant Scout Master John Gambrel, Scout Master Darrin Smith, Troop Committee Chair David Gambrel and Assistant Scout Master Anthony Todd; in back are Trent Watson, Anthony Sousis and Traydon Todd. 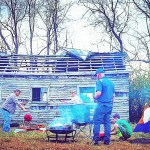 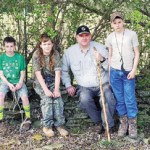 Photo contributed Troop 379 perches upon a rock wall they discovered as they made their way to the earthen Civil War fort last weekend. Pictured from left to right are: Scouts Anthony Sousis, Camerun Coleman, Troop Committee Chair David Gambrel and Scout Traydon Todd. 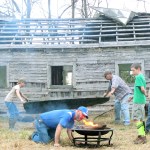 STANFORD – A sign marking the historical site of an earthen Civil War fort in Stanford has now been erected thanks to local boy scouts Troop 379.

It was an eventful weekend for Troop 379 as the scouts set up camp Friday night in a clearing just behind what was once home to the Pleasant Union Baptist Church congregation in Logantown.

But the church isn’t the only historical element to the area, according to Troop Committee Chair David Gambrel, who said the property adjoins an earthen Civil War fort. The fort was home to a large number of Union troops in about 1863, according to local historians who are currently in the process of tracking down documentation to support the site.

The area where the church is located also has plenty of historical significance, Gambrel said, although no true deed for the property has been found.

“Logantown is very fascinating,” Gambrel said. “On this property, there is a cave called ‘Patrick’s Cave’ named for Patrick Hickman, who was a free African American prior to the Civil War.”

Scouts set up camping tents in front of what used to be the church’s fellowship hall, with plenty of green space surrounding them – a location that has “worlds of potential” Gambrel said.

“Imagine all of this undergrowth gone. Look at these Cedar trees…this yard fixed up right and this church fixed up…,” he said.

Gambrel said he would love to see the church restored and maybe even used again by a congregation. He envisions a public trail with interpretative signs leading to the Civil War fort site.

But for now, Gambrel said cleaning up the undergrowth to sweeten the view or painting the church could be potential projects for future Eagle Scouts in-the-making like 14-year-old Traydon Todd.

Todd moved up the ranks Friday night after his Board of Review to become a First Class Scout. Gambrel, along with Scout Master Darrin Smith and Assistant Scout Master Anthony Todd, reviewed all of the things Todd had to accomplish before becoming a First Class Scout.
One task included swimming a set distance and demonstrating rescue techniques, which was harder than Todd expected, he said.

“Normally, when you get in there you kind of want to get it done fast and move along in the water but she teaches you that you don’t have to slam on the water to move fast, you kind of want to ease into it,” Todd said. To complete the next rank of Star, Todd has to earn three new merit badges – family life, cooking and emergency preparedness.

While the weekend was full of fun for scouts, it was jam-packed with important lessons from the very beginning – like how to pick out the safest camp site.

“When we were picking a camp site, we didn’t want to camp under trees that might fall on us and we call those trees what?” Gambrel asked scouts as they finished setting up camp.

“Remember there was an episode a few months ago where a scout was underneath one of those in Red River Gorge and it killed him?” Gambrel said. “What are some other characteristics to look for when you’re picking a camp site?”

“You want to find a nice, even area,” scout Trent Watson answered.

Stanford Mayor Eddie Carter, who owns the property adjoining the church land where the fort is located, joined the group as they were discussing the importance of the camping motto “leave no trace.”

Saturday, scouts and scout leaders made their way to the fort to place a new sign that reads “This earthen fort was built by Union Troops 1.5 miles south of the Dix River during the latter days of the Civil War to safeguard the bridge and road.”

On their way to the fort, Gambrel said the group discovered a rock fence which he believes will only add to the potential of the area if it is further developed as a historical, public site.