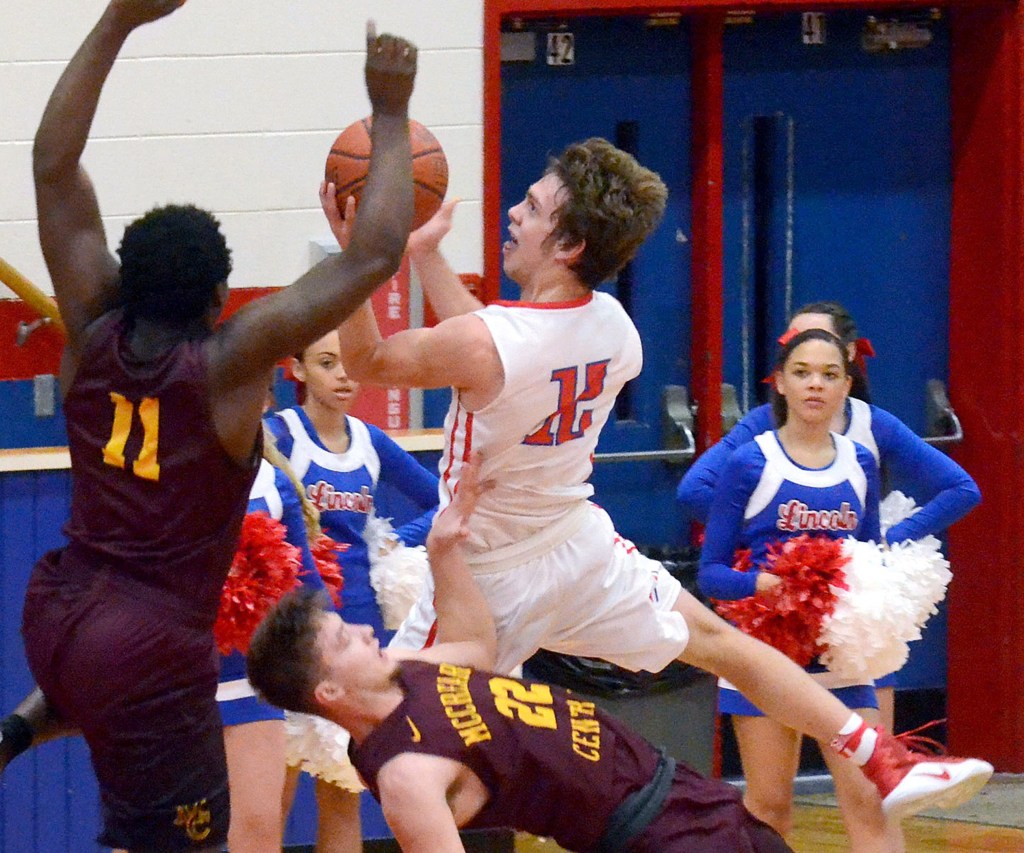 Photo by Nancy Leedy LINCOLN COUNTY senior Noah Young, driving in for a basket against McCreary Central, was voted The Advocate-Messenger All-Area Player of the Year.

No player dominated the 45th District quite like Noah Young did this season.
The guard averaged 23.7 points per game and led the Patriots to their fourth-straight district championship. He lost only four district games in his entire career, and his leadership is a major reason why he’s the Advocate-Messenger Player of the Year.
Lincoln entered the 12th Region tournament as one of the favorites to take home the title, but fell by three points in a first-round upset to Wayne County. Still, Young agreed with what his coach Jeff Jackson said after the season: It was a surprising season for the Patriots.
“After the season was over, coach Jackson pretty much told us that he thought we overachieved, and I would probably agree with that,” Young said. “We didn’t have a guy over 6 foot, probably, in our starting lineup. For us to get 23 wins and to have a chance to win a region championship is pretty amazing.”
Young played a vital role, rarely missing a minute when it mattered for the Patriots. He was a volume shooter and had strong numbers across the board, shooting 50 percent from the field, 41 percent from 3-point range and 76 percent from the foul line.
His progression over the years — he averaged seven points per game as a sophomore — is down to his coaches, Young said. They gave him the individual workouts and size needed to make an impact.
As for his head coach, Young said Jackson’s green light gave him confidence on the court.
“It’s just a really good honor, I guess,” he said. “Just to have the green light, it’s just a lot of trust there. It’s pretty cool.”
Young graduates with teammates Devin Alcorn, Tanner McAninch and Carlos Nunez, seniors who helped him through his career.
“I’ve just been blessed with a lot of good teammates this year,” Young said. “I’ve made a lot of good friendships with the seniors, we’re brothers and I love them to death. It didn’t end how we wanted it to end, but I can always call them my brothers.”
Young has a few options for college basketball, including in-state options like Alice Lloyd, Transylvania and Union College. He said he’s looking to make his decision in two to three weeks.
The All-Area team is comprised of players voted on by area coaches and staff members of The Advocate-Messenger. The top five vote getters were placed on the first team, the next five on the second team, and the remainder on the honorable mention list. Player of the year is the player with the best point total.
2017 All-Area Team
First team
Noah Young (Lincoln County); Trevon Faulkner (Mercer County); Jake Smith (Casey County); Bryce Slone (Boyle County); Parker Dailey (Garrard County)
Player of the Year — Noah Young (Lincoln County)
Coach of the Year — Kurt Young (Mercer County)
Second team
Devin Alcorn (Lincoln County); Jared Southerland (Danville); Reese Smith (Boyle County); Gunnar Gillis (Mercer County); Jason Alexander (Boyle County)
Honorable Mention
BURGIN — Jordan Hurst, Micah Dunn
BOYLE COUNTY — Will Bramel
CASEY COUNTY— Breece Hayes, Collin Miller, Max Reyes
DANVILLE — Zach Thornton, DeShaud St. Martin, Tanner Ford
GARRARD COUNTY— Trevor Jones, Justin Preston
KSD — Irvin Herrera
LINCOLN COUNTY— Chase Phillips
MERCER COUNTY— Rhyan Lanham, Garrett Dean