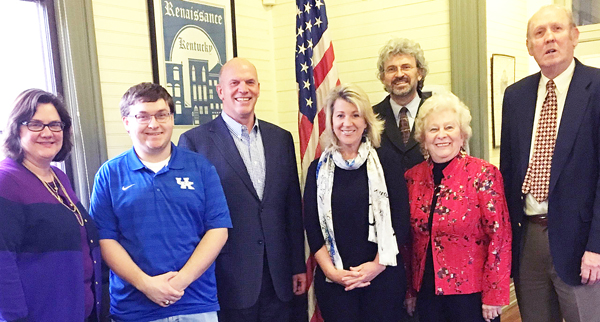 Photo contributed The City of Stanford celebrate recent donations made to the Logan’s Fort restoration project with a group photo. Pictured from left to right are, Carol and Thomas Hill, Jess and Angela Correll, Garland Vanhook, Irene Jaggers and Stanford Mayor Eddie Carter.

Photo by Abigail Whitehouse
Donations made to the restoration of Logan’s Fort will bring new cabins to the site and move the project closer to completion.

STANFORD – In 1777, the construction of the original Logan’s Fort was completed. In 2007, a group dedicated to the restoration of the fort began accepting donations to support their cause. And in 2017, the group received some hefty donations that will now bring the site much closer to completion.

Efforts to reconstruct the log fort – one of the three first forts in the state – have led to the gradual progress and current scene found at the end of Martin Luther King Street in Stanford as donations have trickled in over the years.

Last year, the first-ever reenactment of the Siege of 1777 took place and it’s success restored interest in the project and brought in a new enthusiasm needed to move forward.

“It jump-started everything,” said Mayor Eddie Carter. “Having that and seeing what could happen out there. I think it really helped.”
The mayor attributed much of the first event’s success to Megan Funk’s work as tourism director, as well as many volunteers. Funk has since left the tourism post but remains locally involved.

Recent donations from Lincoln County locals Jesse and Angela Correll, Nancy Hill and collections from the Logan’s Fort Foundation totaled to $140,000, according to Carter.

The Stanford City Council approved a contract between the foundation and Village Restorations, a company out of Pennsylvania who has agreed to construct four cabins to be added to the fort, Carter said.

The purchase of four more cabins, each priced at $35,000, will move the project a little past the halfway-point, he added. Carter said the project has cost close to $200,000 to get to where it is today.

“We’re hoping to have maybe (two of them) up in time for the siege in May,” Carter said. “Kenny Stamper volunteered to go to Pennsylvania and haul two of the cabins back. He’s got a trailer and offered to do it.”

The addition of four new cabins means only palisades, two cabins and two blockhouses are needed to restore the fort to it’s complete, original layout.

“That’s a complete cabin. That’s the floor, the chimney, the chinking between the logs, the logs and a door,” Carter said. “We know some of them didn’t have doors on them and I’m sure some didn’t have floors.”
But it’s a layout that Logan’s Fort Foundation Director Irene Jaggers says is true to it’s time.

“We know this is official, this is right, because it came out of the Draper Manuscripts,” Jaggers said. “This drawing was in the manuscript.”

The document illustrates the layout of the original fort and identifies the last names of the families who occupied the cabins and blockhouses including: Benjamin Logan; William Whitley; Roger Clark; and families with the last names Pettit, Menifee, Mason and Coburn.

Lincoln County local Lynda Closson played a vital role in locating the Draper Manuscripts and getting the ball rolling on the entire restoration project, Carter said, as the efforts got underway in 1996.

Many historically-themed events coincided with the first reenactment and even more have been added to this year’s calendar – events are planned beginning in March and lead all the way up to the May siege.

From living history demonstrations and educational seminars to musical performances and horse-drawn carriage rides, the second annual siege is adding to what was already a full weekend of local activities.

Carter said a group of volunteers called the Friends of the Fort have worked hard since last May to plan and promote the Countdown to the Siege events as well as the siege weekend. In the fall, a second annual Descendant’s Day event will be hosted at the historical site, inviting descendants of the fort families into town.

Jaggers said the fort wouldn’t be what it is today without the donations over time, a portion of which came in the form of $50 worth of pennies from multiple elementary school classes – money which helped create a nearby site of local history learning for future elementary kids.

“The children are just so interested in it,” Jaggers said. “We want to get young people involved as much as we can.”