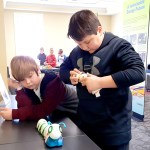 Cole Bourne, left, and Grady Foster, put theirs head together to make the Code-a-pillar wiggle across the table. 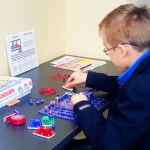 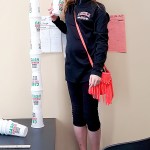 STANFORD – The Lincoln County Public Library has been buzzing with students and science-curious minds as schools and library-goers continue to take advantage of the unique Explore Tech exhibit.

The exhibit features nine different stations for visitors to explore – all of which are open anytime the library is open, according to LCPL Children’s Librarian Amanda Wheeler.

The library was able to land the traveling exhibit thanks to a grant from the National Science Foundation.

“They can come up here and explore on their own,” Wheeler said. “There are instructions at each station to let them know what to do.”

Since the exhibit opened in January, as many as 41 classrooms of students have been through the exhibit, she said.

“And we’re not done,” she said. “Anyone who has called to book a field trip we have booked it for them because this is the only time this exhibit is in Kentucky and we want to give everyone the opportunity to come see it.”

The exhibit is open until March 11, and a finale event will be held that day, Wheeler said.

“We’ll have a program here to go along with that,” she said. “Anytime they want to come and visit between now and March 11, it’s open.”

So far, Wheeler said the exhibit has been a big hit.

“Everybody has had a great time,” she said.

Deputies seize more than $10K worth of marijuana from…