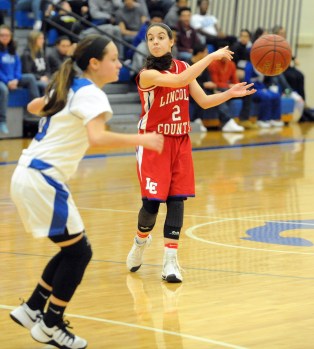 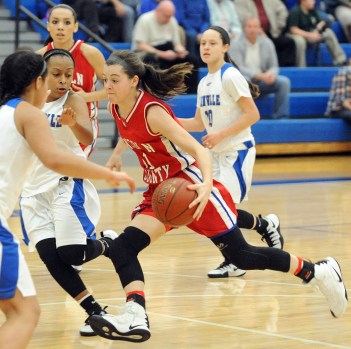 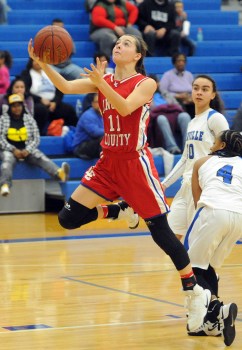 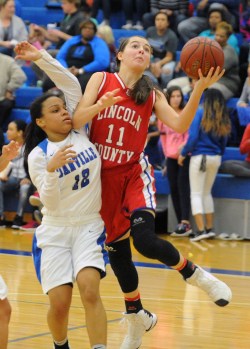 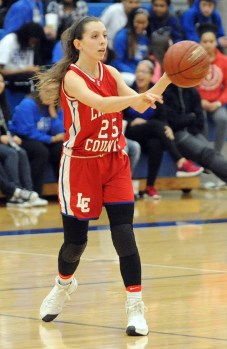 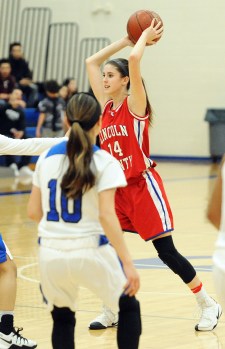 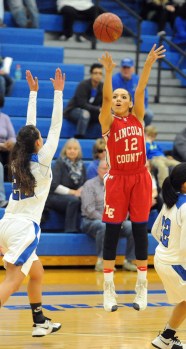 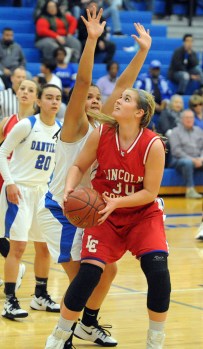 LINCOLN’S Kaitlynn Wilks looks for a shot inside during girls’ 45th District action Friday at Danville. Wilks and the Lady Patriots fell to the top-seeded Danville Lady Admirals 64-54.

DANVILLE — Danville held its own fate Friday against Lincoln County: Win and take the No. 1 seed in the district.
Danville left no doubt, winning 64-54.
The Lady Admirals came ready to play on both sides of the ball, scoring 43 points in the first half to Lincoln’s 19. The Lady Patriots scored just seven points in the second quarter to Danville’s 25.
“We’re pleased with being the number one seed, it was a great game,” Danville coach Michael Menifee said. “We had a good week of practice, just preparing to play a basketball game, not necessarily Lincoln but to play a basketball game. It showed in the first half.”
Ivy Turner scored 12 first-half points to lead the Lady Admirals. Zenoviah Walker and Alyvia Walker each had 10 points. Kennedy Walker had eight points at the break, and it was her scoring that Menifee said kept the Lincoln defense off-balance.
“It’s something that I’ve really been stressing and we’ve been really working on in practice with Zenoviah, Alyvia and Ivy, when they play and they’re driving, we look for the slip because they gather so much attention,” he said. “It kind of loosens the defense up for them to do what they do as the game keeps going on.”
Lincoln rebounded in the second half, outscoring Danville 35-21, but the Lady Ads’ damage in the first half was enough.
“We’ve got to show up for a whole game ready to play basketball,” Lincoln coach Cassandra McWhorter said. “We didn’t look like we were ready in the first half defensively. There was not much defensive effort. The difference between the first half and second half was we picked up our defensive intensity. We looked like we wanted to play defense and the effort was there and the heart was there. But you’ve got to do that for a whole game if you expect to win the ballgame.”
Emma King scored 13 points in the second half and finished with a team-high 18. Wilks finished with eight points after not scoring in the second half. Haley Southerland had eight points and Trinity Shearer scored seven points and had a team-high three assists.
“We had some people at different times during the game do things well,” McWhorter said. “I thought Trinity gave us a lift with pushing the ball a little more. I thought she made some pretty good passes as well, she had three assists. We’ve got to keep feeding the ball inside as well. Wilks took six shots in the first half and only took one shot in the second half.”
Menifee said part of his team’s struggle on offense in the second half was because he was indecisive on what offense to run.
“Like I told the girls after the game, I’ll take a little bit of the blame in the second half, I was toying back and forth with keep pushing, pushing, or execute and burn some clock,” he said. “We kind of got rusty and they got a couple buckets here and there. Our free throw shooting fell a little bit tonight, we’ve been shooting 75-80 percent and it fell just a little bit tonight. Just like almost every game we’ve had over the last 10, 11 games, we make the plays and we do the little things that need to be done to close the game out.”
With the seeding wrapped up in the district, No. 1 Danville will face the winner of KSD and Boyle County; No. 2 Lincoln will face No. 3 Garrard County.
McWhorter said her team needs to go back to basics if they hope to make a deep postseason run.
“I just feel like overall our team effort tonight wasn’t as much of a “team” effort as it needed to be,” she said. “Moving forward to tournament time, we’ve got to go back to square one and some of the fundamentals of basketball that we need to do well. You’ve got to do the little things, you’ve got to play one possession at a time and we need to value every possession and realize how much the ball matters.”
Menifee said he likes having the No. 1 seed and an undefeated district record but realizes that doesn’t mean anything in the postseason.
“We’re pleased with the No. 1 seed, but it doesn’t guarantee getting to the region,” he said. “That’s just one of our goals all year, we want to win the district, get to the region and see what we can do from there. Hopefully we get opposite of Mercer and maybe we can meet them in the regional finals. We’re excited to be 6-0 and set ourselves up to get back in the region.”