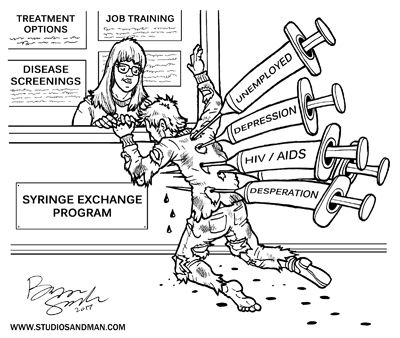 Beyond politics and opinions there is an ever-constant duty of local officials to maintain the public health and safety of the community and the local health board, Stanford City Council and Lincoln County Fiscal Court have recently taken steps to do just that by supporting the implementation of a syringe exchange.
Last summer, the Center for Disease Control ranked Lincoln County 97 out 220 counties across the U.S. deemed vulnerable to the outbreak of diseases commonly caused by the exchange and use of dirty needles. Since the report was released, the heroin epidemic and rate of drug abuse has not waned – it has only increased.
It is only logical to infer that a syringe exchange that was recommended last summer is just as necessary now, if not more, as the drug epidemic continues to ravage through Kentucky communities including this one.
While many will say the exchange is simply enabling drug use by giving addicts clean needles, that opinion overlooks the true intention and purpose of the exchange – to prevent the spread of infectious disease through dirty needles.
During the Stanford City Council meeting, City Attorney Chris Reed described two instances in which he encountered dirty, bloody needles – once in the parking lot of a courthouse and again in the parking lot of a restaurant.
“There was a Ziplock bag full of needles that were full of blood,” Reed said. “Two days after that, I went to a restaurant in Danville and got out of my car in flip flops and almost stepped on a needle that had blood in it.”
Those were experiences worth sharing because they point exactly to the purpose of the exchange, which is to prevent others, especially children, from encountering the same. Reed also pointed to the high cost of treatment for infectious diseases like hepatitis C, which costs about $86,000 annually, and HIV, which costs about $380,000 per year.
In 2014, Kentucky’s Medicaid program spent more than $50 million to treat 800 of those infected in the state – a cost that the public helps pay. Perhaps if we can get these high costs down, we can allocate more funding toward affordable treatment options.
These addicts need our help, not our judgement. It is too easy to sit at home and condemn them for a disease that has taken complete control of their lives. Does that mean they are not responsible for their actions? No. But it does mean that in order to find their way out of the downward spiral, they are going to need some help.
It is time for us to be neighbors again. Without the community coming together, this problem will not go away.
We know it is hard to overlook criminal activity caused by drug addiction and we by no means endorse the idea of letting any criminal act off the hook. But history has shown that putting an addict in jail rarely does more than get them clean for a short period of time before they are released and return to the same lifestyle as before – with no alternative treatment or housing to run to in the immediate area.
As for drug-traffickers, we have and always will support the full enforcement of the law for perpetuating a problem that continues to spiral out of control and take the lives of local residents.
This newspaper is tired of printing the obituaries of our youth and pretending that there is nothing this community can do – we all have a part to play.
We applaud our local government officials for seeing beyond the surface and realizing that a syringe exchange is a proactive attempt to not only keep this community safe, but save taxpayers money by getting dirty needles off the streets, getting more people tested for infectious disease and putting addicts closer to treatment.

No Fault Of Their Own