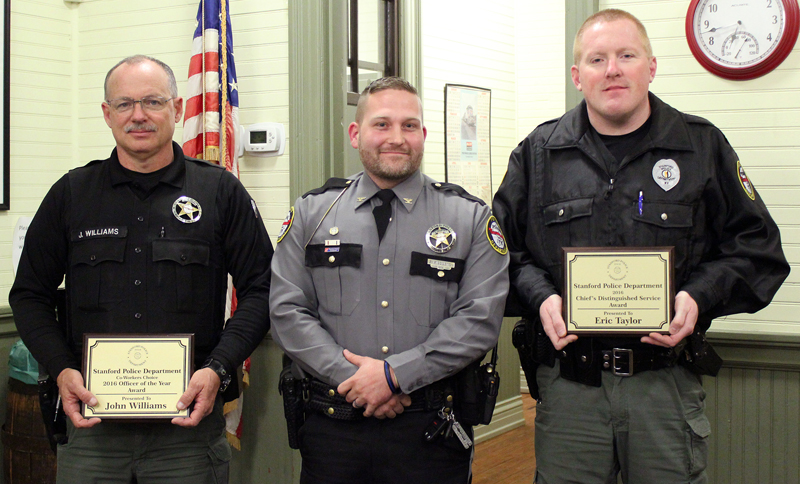 STANFORD – Several Stanford police officers were recognized for their outstanding service in 2016 during the city council’s meeting last week.

Police Chief Zach Middleton said 2016 was a good year for the police department as they moved back into their building following roof repairs, added a new K9 drug detection unit to the team and added newer vehicles to the police fleet.

“We focused more on drug work. It’s still not enough and I don’t know that it will be any time soon but we’re going to do the best we can to work on that,” Middleton said. “We’re moving closer to our longterm goal of accreditation. The big thing is the policy manual.”

Like he did in 2015, Middleton said he attributes the rise in response numbers to the ongoing drug epidemic in the region – which translates into several areas of crime such as the number of thefts and burglaries.

“The drugs overall are creating many of the other problems we are having,” he said.

Annual awards
While Middleton discussed the department’s accomplishment’s as a whole, it was the compassion and dedication to service of several individual officers that was recognized last Thursday night as Middleton presented annual awards and certificates.

For the second year in a row, Police Officer Johnny Williams was named the 2016 Officer of the Year – an honor given to him by his fellow Stanford police officers.

In consultation with the department’s sergeant and captain, Chief Middleton also awarded the “Chief’s Distinguished Service Award” to Officer Eric Taylor for his outstanding and distinguished service to the City of Stanford, based on evaluations in areas including body of work, quality of work, report writing, heroism, investigations, community service, zero-to-minimal complaints and professionalism.

Awards given based on public recommendations were also presented.

“One of those was Officer Greg Hill who assisted an emotionally distraught citizen one day. He really went the extra mile to help her out,” Middleton said. “The other one was Officer Eric Taylor for assisting a lost child on Halloween. He got separated from his parents and Eric kept him calm.” 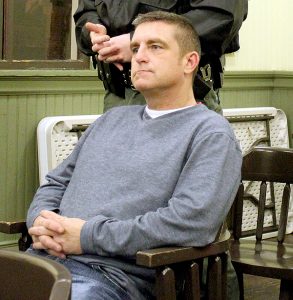 Photo by Abigail Whitehouse
Officer Greg Hill, sitting at left, was recognized during the Feb. 2 Stanford Council meeting for his service and assistance as recommended by members of the community.

Taylor was off-duty at the time and even took the child trick-or-treating before he found his parents, Middleton said.

New to this year’s recognitions was the “Preservation of Life” award which was presented to officers for their life-saving efforts of individuals while in the course of duty in 2016.

“The following officers were recognized demonstrating heroism and skill and the preservation or attempted preservation of human life beyond the scope of normal professional performance: Johnny Williams, Preston Middleton and Detective Tim Morris,” he said. “We also presented one of these awards to a non-department citizen, Briget Gilliand. She assisted Johnny (Williams) on a roadside CPR emergency one night.”

Officers weren’t the only ones recognized for their service last year as several non-law enforcement citizens were honored as well.

Since the police department does not have it’s own secretary, Middleton said he wanted to recognize City Clerk Dana Taylor’s work in helping keep up with paperwork throughout the year.

“She does a lot of that and she does a good job at it,” he said.

Also recognized was Andrea Miller with the Safe Communities Coalition.

Council members applauded all of the officers following the ceremony.

“A lot of people don’t see what they do on a daily basis,” Middleton said.
“They see a lot, they do a lot and they do an excellent job. Every one of them go above and beyond to help the citizens here, even beyond the scope of police work. I’m proud to say they’re all from here and we have a really great department here.”

In other business, the city council:
• appointed Jeff Cain to the planning and zoning commission.
• donated $500 to the second annual Siege of Fort Logan, which is scheduled for May 19-21.
• Fire Chief Scott Maples reported that the city collected about $3,500-4,000 last month through incident recovery.
• Continued discussion of City of Stanford Strategic Plan and potential slogan for the city.
• City Clerk Dana Taylor reported 141 business licenses have been paid for so far in 2017.