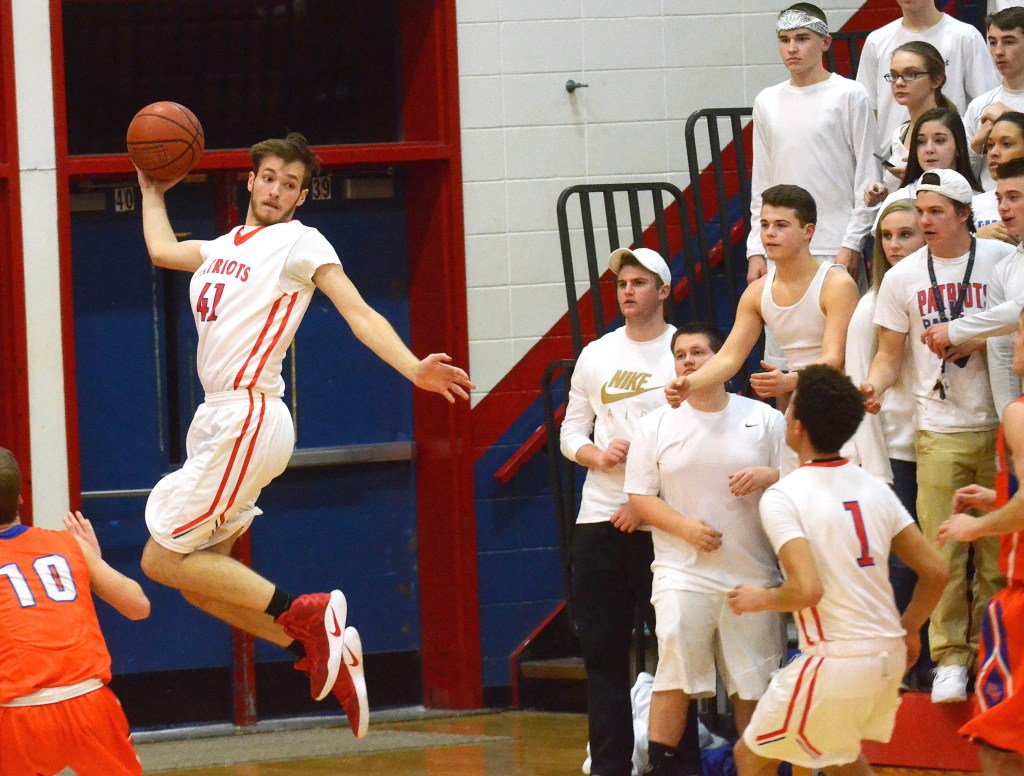 LANCASTER — It was a gut-check win for Lincoln County — and a gut-wrenching loss for Garrard County.
The Lincoln boys rallied from an 11-point halftime deficit to force overtime, then dominated the extra period to defeat Garrard 63-56 Friday night at Garrard Middle School.
The Patriots scored the first eight points of overtime to clinch a difficult road win against a Garrard team that gave them all they could handle for the second time this season.
Noah Young scored 22 points and Devin Alcorn added 20 for visiting Lincoln (18-7), which trailed 39-32 when the fourth quarter began but opened that period with an 8-2 run that set the stage for a frenetic finish.
“They played very, very well, and I thought our kids showed some grit and resiliency in the second half fighting to get back in it and made some plays when we had to make some plays,” Lincoln coach Jeff Jackson said. “I’m proud of our kids for the win and how hard they worked to fight and scratch and claw to get back in the game.”
Ryan Young was proud of the way Garrard (5-18) played, too, but the first-year coach was disappointed with the way things turned out after the Golden Lions led 31-20 at halftime.
“That’s the breaks of a big game. They made some plays, and we made some plays, too, but we just didn’t make enough,” Ryan Young said.
Ryan Young lost to his younger brother, his former coach and his alma mater for the second time this season – Lincoln defeated Garrard 57-50 on Jan. 17 in Stanford – but the teams will meet once again just over two weeks from now in an elimination game in the 45th District Tournament.
“If you would’ve told us – or probably anybody in that gym – two months ago that we were going to compete like that and play like that against a very good ball club, I think people would’ve called you crazy,” he said.
There were two ties and three lead changes in the final 2:22 of regulation, when Blake Smith hit two clutch 3-point shots and Devin Alcorn hit one to provide Lincoln with all of its points in the back-and-forth finish.
Smith’s first 3 tied the game for the first time at 47-all, Alcorn’s 3 gave the Patriots their first lead on their next possession and Smith’s second 3 put them up 53-51 with 24 seconds remaining.
Smith’s two long-range baskets were his first points of the game.
“Blake can shoot the ball, and he’s in there for that reason,” Jackson said. “He hit that first one, and they did a good job finding him the second time. He missed a couple earlier, but he kept shooting it, and he’s supposed to.”
Justin Preston came up just as big for Garrard in the closing seconds of regulation, getting inside for a layup that tied the game with eight seconds left. Noah Young launched a long 3-point shot for Lincoln ahead of the buzzer, but it missed the mark.
Lincoln held the ball in hopes of getting good shots early in overtime, and Chase Phillips hit two free throws 1:10 into the period that put the Patriots on top to stay.
Alcorn followed an empty Garrard trip with a layup that made it a four-point game, and two more free throws each by Phillips and Noah Young made it 61-53 with 49 seconds to go.
Lincoln hit 12 of 14 free throws in the fourth quarter and overtime and 19 of 24 overall. Noah Young was 10-for-12 at the foul line, and Phillips was 6-for-6.
Garrard made 13 of 19 free throws, and the Lions missed three of seven attempts during a stretch of just over two minutes midway through the fourth quarter.
The Lions outshot the Patriots from the field, 49 percent to 45 percent.
Parker Dailey led Garrard with 19 points, and Preston had 14, including the Lions’ final four points in regulation.
Lincoln outrebounded Garrard 27-22, getting eight boards from Tanner McAninch and five from Carlos Nunez. Noah Young also had eight assists for the Patriots.
The Patriots have won 10 of 11 meetings between these teams over the last four seasons and 20 of the 21 meetings since February 2009.
But Garrard was in control of this game in the first half, as the Lions opened a 15-7 lead late in the first quarter thanks to scoring from five different players.
Lincoln pulled to within 25-20 late in the second period, but Garrard scored the final six points of the first half, closing with a jumper by Preston at :03 to take a 31-20 lead to the locker room.
The Lions led 33-22 when the Patriots got off the mat with five straight points midway through the third quarter that started a 10-4 run.
“I think for our kids, it’s just about learning how to keep playing when good teams make runs. Good teams and teams that have been through battles like they have, they’re going to make plays. And I felt like in the third quarter we hit a lull where we just didn’t attack and finish plays the way we needed to.”
Jackson said it was a good win for Lincoln in a tough environment.
“We got what we expected,” he said. “We had a big battle with them at our place, and we knew coming here tonight – a district game, on the road – it would be a similar-type game, and it was.”