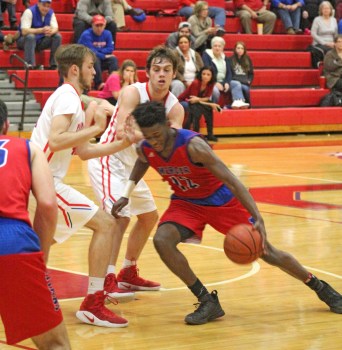 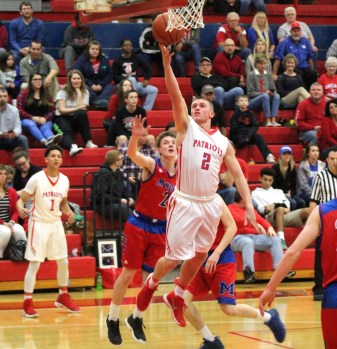 Photo by Mike Marsee TANNER MCANINCH of Lincoln County gets past two Mercer County defenders for a layup during the second quarter of the Patriots’ 72-50 Senior Night win. 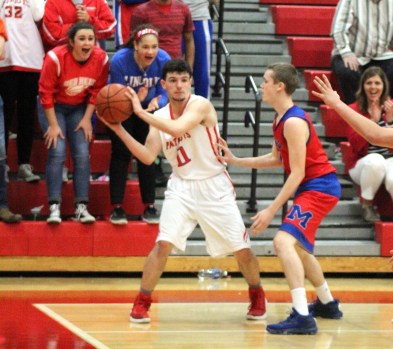 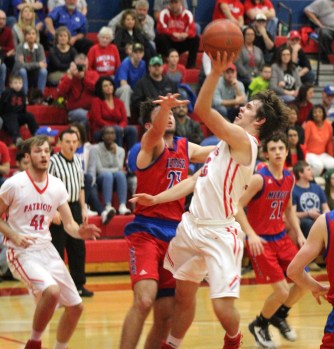 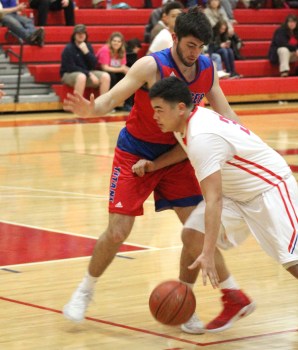 STANFORD – The Lincoln County boys had their way with Mercer County on Tuesday night.
That was certainly evident on the scoreboard after Lincoln cruised to a 72-50 victory over Mercer, but it was also evident in the way the game between the area’s top two teams was played.
The host Patriots dictated the pace of this matchup of two teams that were looking for their 20th win. They outshot, outdefended and generally outplayed the Titans from start to finish.
Lincoln (20-7) is easily the more methodical of the two teams, and its methods were successful Tuesday. The Patriots shot 50 percent from the field, went 10 for 23 from 3-point range and committed only eight turnovers as they won their sixth straight game.
“I thought we did a pretty good job of handling their pressure, and we moved the ball well, and we hit shots,” Lincoln coach Jeff Jackson said.
On the other end of the floor, Mercer (19-6) shot just 38 percent from the field and hit only four of 18 3-point shots as its four-game winning streak came to an end.
“I told our guys, ‘Sometimes you’re the bug and sometimes you’re the windshield, and tonight we were the bug,’” Mercer coach Kurt Young said. “It’s a battle of styles, and they played their style tonight and we weren’t able to get them out of it.”
The subplot was a showdown between the area’s top two scorers, and Lincoln’s Noah Young prevailed in that battle by outscoring Mercer’s Trevon Faulkner 28 points to 26. Both players came into the game averaging 23.9 points.
“I thought Noah played well, and I thought our whole team played well,” Jackson said.
Young was 11-for-18 from the field and 5-for-7 at the free throw line, while Faulkner was 8-for-15 from the field and 8-for-10 at the line.
While Faulkner hit more than half of his shots from the field, the rest of the Titans were just 8-for-27, and none of them scored more than six points.
“I thought our defense was really good except for a couple of breakdowns on Trevon’s penetration, but everybody has breakdowns on Trevon’s penetration,” Jackson said. “Transition defense was important, because they get up and down and they do it really well, and I thought we did a good job of squeezing the paint and keeping them from getting out in transition.”
Mercer was held 30 points below its season scoring average and well below Lincoln’s average of 56.7 points allowed per game.
“We were very active tonight defensively,” Jackson said.
“You’ve got to score the basketball to get in your pressure, and we didn’t hit shots, and I thought we turned it over at some inopportune times,” Young said. “We were off a little bit, and I’ll take responsibility for that.”
Chase Phillips scored 16 points for Lincoln, and Devin Alcorn had 13 points and six rebounds.
Mercer got seven rebounds each from Faulkner and Gunnar Gillis.
Lincoln began to assert itself with a run of 10 straight points late in the first quarter and early in the second that gave the Patriots an 18-7 lead.
Mercer closed to within six points moments later, but consecutive 3-point baskets by Lincoln’s Devin Alcorn and Blake Smith made it 30-17 just 2-1/2 minutes later, and Young scored the Patriots’ last seven points of the first half to give them a 37-21 halftime lead.
“We didn’t make a lot of adjustments tonight, and that was partly for a reason, but we’ve got to do a better job of stopping the basketball,” Young said. “They made shots and we let them get into a good rhythm, and they took advantage of that rhythm.”
Alcorn and Young again hit consecutive 3s midway through the third quarter to make it 48-28, and Young soon followed with six unanswered points that gave Lincoln a 54-30 lead with 2:25 left in the period.
The Titans never got closer than 16 points after that, and the Patriots led by as many as 25 late in the game.
It made for a happy senior night for Lincoln, which has one home game remaining but chose to observe its senior night during the final girls-boys doubleheader of the home schedule. It also gave the Patriots another big win to build on as the postseason approaches.
“Hopefully we can continue to practice hard and stay focused and continue to improve. We’ve got a lot of work to do between now and the district tournament,” Jackson said.
The work will also continue for Mercer.
“This game’s not about winning and losing, it’s about trying to get better and seeing what we’ve got to work on, and unfortunately it showed a ton we’ve got to get better on,” Young said.