River Drive standoff ends without incident after no suspect found 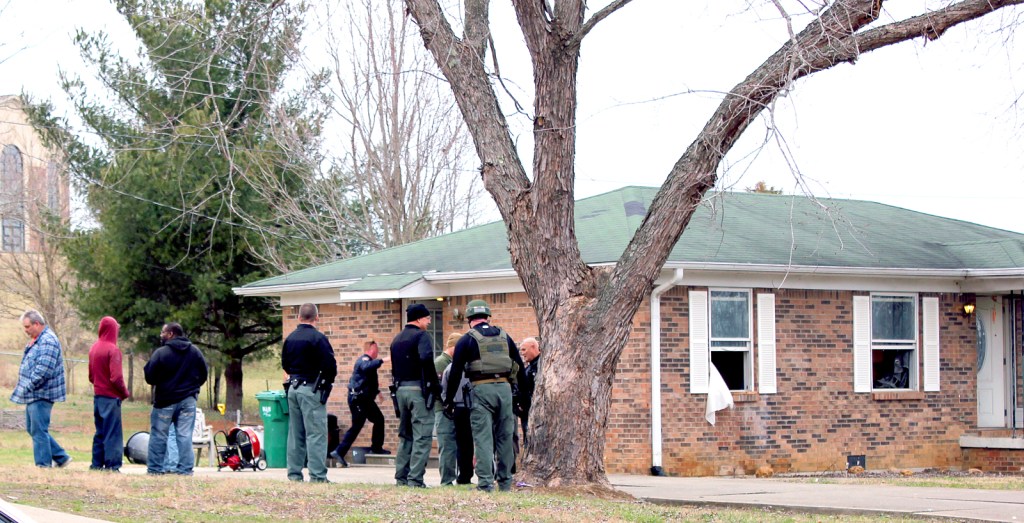 Photo by Abigail Whitehouse Local law enforcement gathers outside of a home on River Drive after a brief standoff, which ended without incident after they were unable to locate the armed suspect reportedly inside the home.

STANFORD – Police surrounded a house on River Drive after receiving reports of an armed man inside refusing to leave but the suspect was not found inside the residence.

Samuel Clark was the man police said they were looking for after Constable Jesse Harris and property owner Rick Cole attempted to serve a warrant of eviction to the man and his girlfriend living at 196 River Drive last Tuesday evening.

According to Stanford Police Chief Zach Middleton, when Harris and Slone arrived, they knocked on the door for several minutes and no one answered. Stanford Police were dispatched to the residence for assistance.

“Upon arrival, we were advised by the constable that he had been inside the residence and had spoken to the female who resides here who advised him the male subject was hiding in the bathroom and told us he saw two guns in the residence,” Middleton said.

“The female came out with her hands up after about 10 minutes,” he said. “We asked if he was in there and she said ‘I don’t know.’ She had already told the constable he was in the bathroom hiding but when we got in there the bathroom door was open and he wasn’t in there.”

Police removed the female and themselves and set up a perimeter outside the home and contacted the Lincoln County Sheriff’s Office who activated the Emergency Services Unit to assist.

Sgt. Ryan Kirkpatrick said the ESU’s five members were briefed by Stanford PD before entering and were told Clark had a history of the same behavior in Bowling Green.

“We assembled our team and made entry into the house. It’s one level but has an attic and a crawl space. We used a combination of gas and distraction devices to disorient any persons possibly in the house,” Kirkpatrick said.

No one was found inside the home but ESU did locate several weapons in the house, as well as drug paraphernalia, Kirkpatrick said.

Lincoln County EMS was on standby, he added, while the Stanford Fire Department offered support with a ladder, thermal energy cameras and a fan to clear the smoke and gas from the home.

School bus traffic in the area was halted for a brief period of time, Middleton said.

As for the property, the owner said he is out about $15,000 in damage due to the condition Clark left the residence in. Cole said he was concerned with potential drug-trafficking going on inside the home and had tried to be nice about evicting the couple.

“We tried to be nice at first and tell them to come and get their stuff. When someone’s on dope, you can’t do anything. We posted notes on their door every day for the last week telling them ‘hey it’s moving day, time to leave’,” he said. “They weren’t paying rent.”

As a landlord, Cole said he has seen some crazy things but this is by far the worst.

“We worked with them all we could but at some point it has to come to an end,” he said.