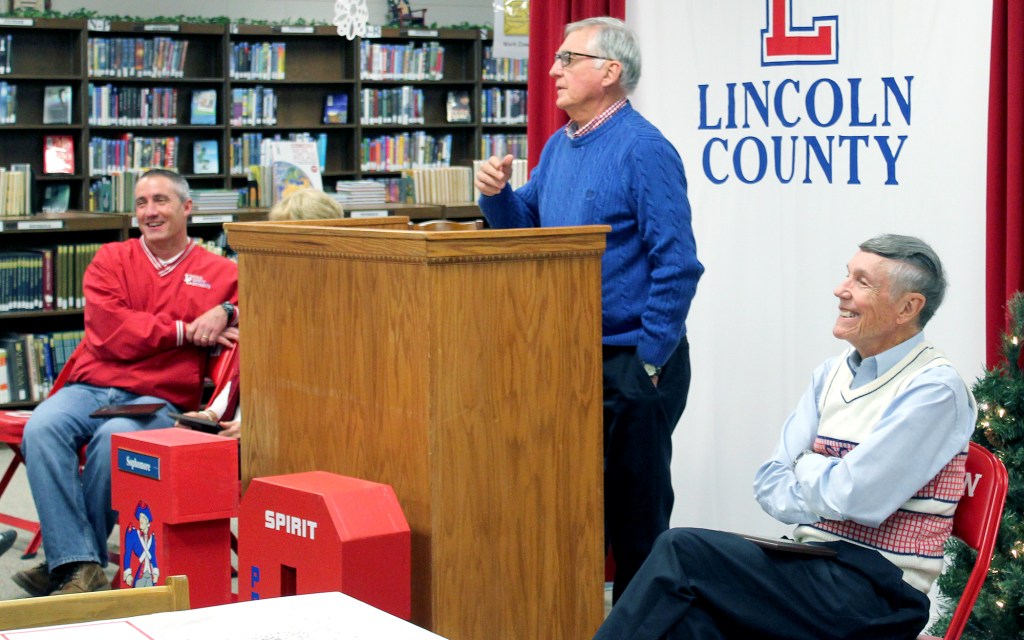 Photos by Abigail Whitehouse Jim Baughman, center, speaks briefly as he is inducted into the 2017 LCHS Patriot Hall of Fame. Also inducted were Jason Todd, left, and Henry Baughman, right. 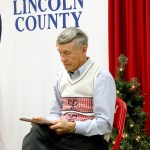 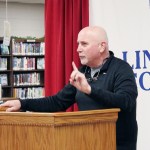 Photo by Abigail Whitehouse Bruce Edgington speaks about his career in Lincoln County as he is inducted into the Patriot Hall of Fame Class of 2017. 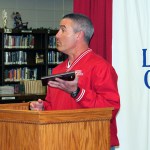 Photo by Abigail Whitehouse Jason Todd holds up his plaque as he is inducted into the 2017 Patriot Club’s Hall of Fame. 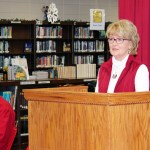 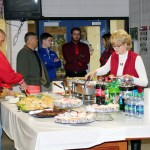 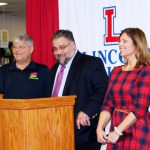 Photo by Abigail Whitehouse From left to right, David and Jon Smith and Amy Smith Bastin, speak in honor of their father, Calvin Smith, who was inducted into LCHS’ 2017 Hall of Fame.

STANFORD – Many Lincoln County memories were shared – along with some laughter and a few tears – as the Patriot Club inducted it’s fourth hall-of-fame class on Jan. 13, adding six new inductees to the group.

The 2017 inductees were recognized during a ceremony in the Lincoln County High School Library, prior to the boys and girls basketball games and again at half court as the large crowd gave a standing applause.

The six chosen inductees met or exceeded the following criteria:
• Demonstrated outstanding success in academics, athletics or leadership while enrolled at LCHS.
• Demonstrated a recognizable degree of proficiency in these areas after graduating from LCHS
• Made an outstanding contribution to the students and staff of LCHS as a teacher, coach, administrator or supportive member of the community.

In alphabetical order, the 2017 inductees announced by former LCHS principal Tim Godbey were:
• Henry Baughman, a lifelong Lincoln County resident and three-time doubles champion in high school tennis, has made significant contributions to LCHS students. He is responsible for the revitalization of the LCHS tennis courts and allowed the county and high school soccer program to the use the family farm for playing fields. His influence has positively impacted the LCHS tennis and soccer programs.
Godbey introduced Henry Baughman as an “unsung hero” of LCHS for the work he and his brother, Jim, have done for the school tennis courts.

Baughman explained how he went from noticing cracks in the school tennis courts to managing the repair and ongoing maintenance of much improved courts across the region that remain in play today. As the first Instructor Trainer for Western Kentucky’s emergency care program, Baughman said he was most proud of his work in that role.

“Tennis is a lifetime sport and I try to emphasize that – that’s one of the reasons I’m so interested in the tennis courts,” he said. “Thank you all so much for the honor that has been bestowed, I very much appreciate it.

• Jim Baughman, also a lifelong Lincoln County resident and brother to Henry Baughman, is a two-time regional singles champion and three-time doubles champion in high school tennis. Like his brother, Jim Baughman has made significant contributions to LCHS students by helping with the revitalization of the LCHS tennis courts and sharing the family farm for playing fields.

“It is certainly a significant honor to receive this nomination and to participate in this,” Jim Baughman said. “Tennis is, as Henry mentioned, a lifetime sport. Our help with the courts is primarily a way of giving back. Tennis has meant a lot to me throughout my lifetime.”

• Bruce Edgington is a 1980 LCHS graduate who played four years of high school basketball. Edgington amassed numerous awards for his play including being named captain of his team in the 1980 Kentucky High School Sweet 16 basketball tournament. He went on to play basketball at Sue Bennet College and is no the CEO of People’s Bank of Kentucky. Edgington continues to support LCHS student-athletes through numerous contributions.

“There has been a lot of change and I’m happy that through my jobs, I’ve been fortunate enough to be CEO of two banks here in our county and through our boards and the people we work with, we’ve been able to help a lot of people,” Edgington said. “I’ve seen a lot of infrastructure, water, sewer, all types of improvements in our county over the last 36 years. I’m proud to be from Lincoln County.”

• Karen Hatter is a 1974 Memorial High School graduate and started her professional career as a classroom teacher in 1982 at Highland Elementary School. Prior to her retirement in 2016, Hatter served as teacher, counselor, director of pupil personnel, instructional supervisor, assistant superintendent and from 2010-2016 superintendent of Lincoln County Schools. Her leadership was instrumental in turning Lincoln County Schools into a Distinguished Kentucky School District.

Hatter played an influential role in Godbey’s life and career, he explained to the crowd before introducing the former superintendent. Godbey was LCHS principal in 2011 when the state deemed it a priority school in light of state assessment scores and he worked with Hatter to turn the scores around.

“What, at the time, I thought was a terrible situation ended up being a life blessing for me, personally and professionally, and it was a game changer for the school and the district,” he said. “In my opinion, she is the reason our district is where it is today, including Lincoln County High School.”

Hatter thanked the committee for the honor as she accepted a plaque from Godbey.

“Thirty three years is a long time but it passed quickly. I cherish and value every experience I had during that time,” she said.

Hatter summed up her professional career in Lincoln County beginning as a teacher, walking into a Highland Elementary classroom 33 years ago  when computers were scarce, and leaving as superintendent as the district began implementing a one-to-one initiative that puts computers in the hands of every student.

“Back in 1984 we had a one-to-one initiative, one computer to every school,” Hatter said laughing. “So just think how far we’ve come and how things have changed.”

• Calvin Smith (posthumously inducted) purchased WRSL-AM radio in Stanford in 1965 and added WRSL-FM in 1967. Prior to his death in 1987, Smith patiently and professionally delivered information throughout the county to ensure an appropriately informed public. His vision is responsible for the broadcast of hundreds of Lincoln County school events and his legacy continues today through WPBK-FM. Once known as “the common thread through the county, Smith’s influence is now reaching a world-wide audience.

Godbey spoke of his personal experience as a Lincoln County student listening to WRSL-FM for school closings and how his grandparents, who couldn’t travel to his games, would tape his basketball games on cassette tapes.

Accepting the award for Smith were his children Jon and David Smith and Amy Smith Bastin.

“They had a code word for canceling school. The code word was ‘snowgoose’ and to know that ‘snowgoose’ was the word that cancelled school, that was like I had the nuclear code,” Jon Smith said laughing. “To be remembered all this time later, we do appreciate that.”

•  Jason Todd is a 1988 LCHS graduate who excelled in football, basketball, baseball and in the classroom. Todd received numerous honors including the regions male athlete of the year and was one of twelve finalists for state athlete of the year. In addition to being named 1st Team All State in football, he graduated in the upper 15 percent of his class. Todd’s efforts at LCHS led him to become starting punter for the University of Kentucky Football program in 1992.

Todd said the induction has brought back a lot of happy memories of competition as he remembers playing three different sports and having three sets of teammates – and his parents who helped get him to practice and games.

“Thanks to mom and dad for all the stuff that they had to do to make it possible,” he said with tears in his eyes. “I grew up in Broughtontown. We lived half-an-hour to 45 minutes away from Stanford so it was not the easiest thing in the world to get me back and forth for my first two years until I could drive. I can’t possibly thank them enough.”

Todd said he and his wife, Angela, continue to give support to the local sports community and he considers it an honor to be inducted to the Patriot Club’s Hall of Fame.

Final words were spoken by current Superintendent Mike Rowe who brought the ceremony to a close.
“Being new to this area, seeing something like this is truly a special moment. This is a special group you have together here,” Rowe said.