Pats redeem themselves with 76-38 rout of Raiders 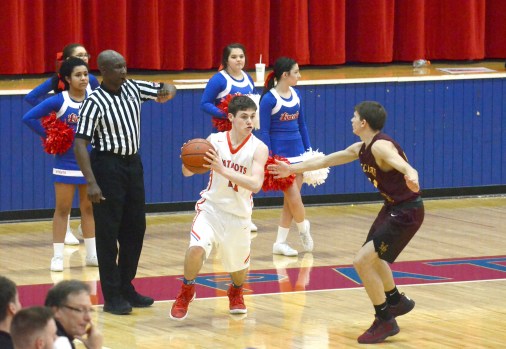 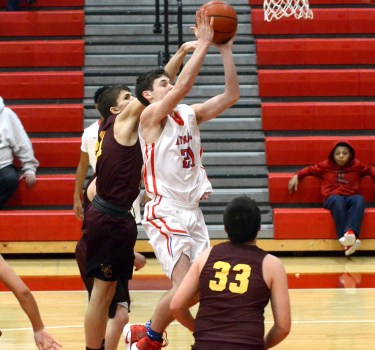 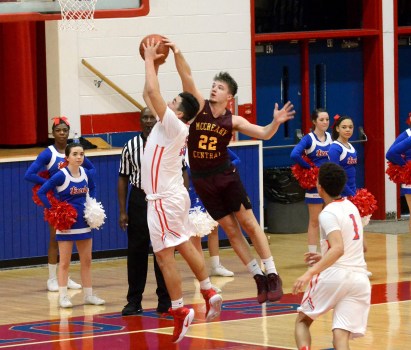 MCCREARY CENTRAL’S Ryan Jones gets up to get a hand on this first-half shot attempt by Lincoln County’s Carlos Nunez Tuesday night in the Patriots’ 76-38 win. Nunez contributed eight points in the win as Lincoln improved to 15-7. Photo by Nancy Leedy 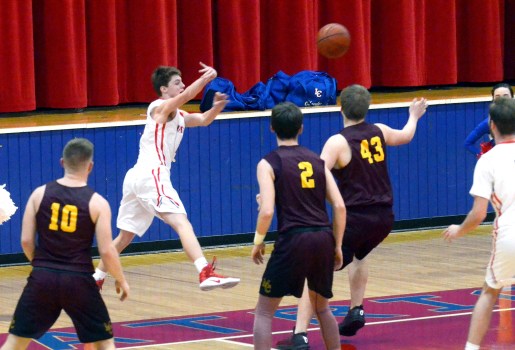 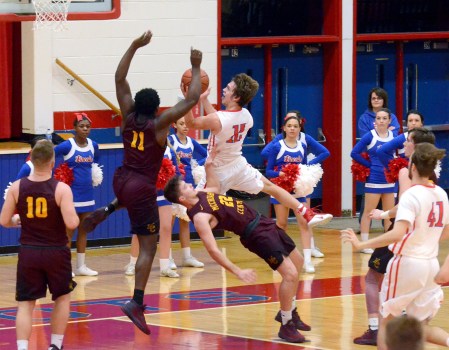 STANFORD — It was bounce back Tuesday for the Lincoln County boys’ basketball team.
After sustaining their worse loss of the season Friday – a 66-41 drubbing by Madison Central – the Patriots rebounded in a big way, steamrolling the visiting McCreary Central Raiders 76-38.
“We had a gut check from the other night,” Lincoln coach Jeff Jackson said. “We did not play well Friday in any facet of the game. We got manhandled a little bit on Friday. But I thought our kids came out and responded well tonight, especially defensively in the first half. I thought we were very active, doubling-down on the ball and getting the ball out in transition. Our defense kind of got us started and then we started shooting the ball pretty well and got on a good roll.”
It didn’t take Lincoln long to “roll.” Ryan Jones converted on a three-point play a minute into the game for McCreary’s only lead of the night, 3-2. However, Lincoln (15-7) answered with the game’s biggest scoring run, a 13-0 surge, to go on top for good.
Chase Phillips, one of three Patriots in double figures in the win, picked up six of his 11 points in the run off two 3-point field goals. Blake Smith also drained a 3 in the run then Noah Young, who poured in a game-high 24 points, drove inside for two buckets before closing the first quarter with his own trey to give Lincoln an 18-6 lead.
Lincoln, which was at 48 percent from the field off 28-for-59 shooting, including an impressive 12-for-26 effort from 3-point range, cashed in on nine treys in the first half. The Patriots knocked down five of those 3’s in the second quarter as they outscored the Raiders 25-9 to extend their lead to 28 points at the break.
Devin Alcorn, who scored 14 points on 4-for-8 shooting from 3-point range, tallied four goals in the second quarter, bombing in three from behind the 3-point arc. Phillips and Young also got a 3-pointer apiece in the second period. Young also picked up two free throws, Tanner McAninch added a bucket and two free throws and Nick Noland hit inside to give Lincoln a 43-15 halftime lead.
“Our kids were disappointed in how we didn’t play well Friday night and they came out focused and played well and did some good things,” said Jackson. “And their energy level was high.”
McCreary (12-8) came out in the third quarter to outscore Lincoln, however, the 15-14 scoring edge did little to impact the game and the Patriots closed on a 19-8 fourth-quarter run to secure the lopsided win.
“We shot the ball well. I think we had 18 assists on 28 baskets tonight. It was a good team effort. All three teams (freshmen, jv, varsity) came out tonight and played really well,” Jackson said. “I’m proud of them. It’s a good win. Now we’ve got to get ourselves focused on the task at hand Friday night (Boyle County).”
Hunter Jones led the Raiders with 18 points and three assists.
McCreary shot just 33 percent from the field, going 13-for-40, 4-for-17 from 3-points out. The Raiders were 8-for-12 at the foul line.
Lincoln was 8-for-8 at the line.
Phillips led the Patriots in a 34-24 win on the glass, grabbing seven rebounds. Young had five boards and Alcorn four. Young also had five assists, Phillips had four assists and Alcorn had five steals.
Devon Hamilton, Nick Longmire and Jones led the Raiders in rebounding with six boards apiece.
“They’ve got a pretty good team,” Jackson said of McCreary. “Jimmy (Voight) has done a good job with those kids. We got on a good roll against them early tonight. Hopefully that will carry on into the rest of the season.”