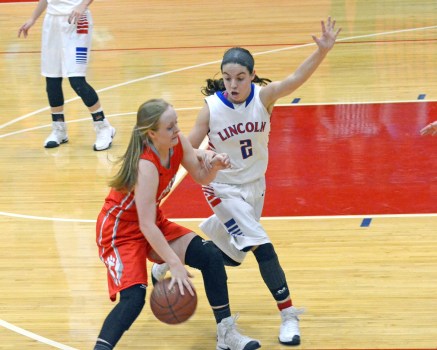 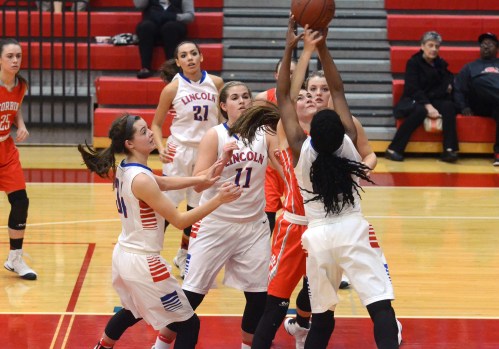 LADY PATRIOT Zaria Napier reaches in to grab the ball away from Corbin’s Cora Stevens before she can put up this layup attempt in the first half Monday of Lincoln’s 76-44 win over the visiting Lady Redhounds. Keeping an eye on the play are Napier’s teammates, from left, Emma King, Haley Southerland and Kaitlynn Wilks. King had a game-high 22 points in the win and Southerland had 12 points. Napier finished with nine points. Photo by Nancy Leedy 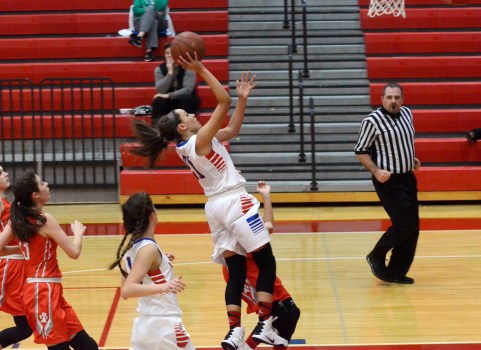 STANFORD — Emma King had a game-high 22 points and Maddy Boyle and Haley Southerland each had 12 points Monday night as the Lincoln County girls’ basketball team defeated visiting Corbin 76-44.
It was the fifth straight win for the Lady Patriots, putting them at 14-5 overall. The “W” was also the 13th double-digit victory for the team.
Lincoln jumped out to a 26-14 first-quarter lead but scored only nine points in the second period. However, Corbin (8-13) never seriously threatened the Lady Patriots’ lead. The Lady Redhounds also got just nine points in the second quarter then Lincoln surged in the third, using a 19-8 scoring run to distance itself from Corbin.
“It took the third quarter and us making a little run there defensively to really put it away, because in the second quarter we went on kind of a scoring drought,” Lincoln coach Cassandra McWhorter said.
While disappointed with the second-quarter slump, McWhorter liked her team’s rebound in the third period.
“We’ve had slow third quarters so I am proud of the girls for coming out in the third quarter and putting it out of reach pretty early because we’ve not done that a lot this year,” she said.
Boyle had 10 of her 12 points in the first 4 minutes, 18 seconds of the game as Lincoln opened up a 14-8 lead. King sank two free throws to open the game then, after a game-tying goal by Corbin’s Cora Stevens, Boyle hit five of Lincoln’s first six field goals.
Lincoln posted its first double-digit lead by the end of the first quarter, cushioning its lead with a 12-4 closing run. King scored eight of the 12 points in the run and Kaitlynn Wilks and Logan Godbey had a bucket apiece to put the Lady Patriots up 26-14.
Lincoln, which was at 53 percent from the field on 31-for-58 shooting, 4-for-10 from 3-point range, earned its 26 first-quarter points on a 12-for-17 start.
Twelve points would be the largest lead of the first half. The Lady Patriots held to a double-digit lead until midway of the second quarter when Corbin’s Jadyn Robertson drained a 3-pointer and Savannah Finley followed with a bucket to get the Lady Redhounds within 30-23.
They never got any closer.
Trinity Shearer tallied her own 3-pointer for Lincoln late in the second quarter and Southerland closed with two free throws to make it 35-23 at the half.
The Lady Patriots then extended their first-half ending run into a 19-2 scoring blitz, outscoring the Lady Redhounds 14-2 to open the third quarter.
Logan Godbey scored back-to-back buckets in the third-quarter run, Jenna King and Shearer got a bucket apiece and Emma King, who had 12 of her 22 points in the second half, nailed a 3-point shot before Zaria Napier, who finished with nine points, capped the run with a three-point play to make it a 49-25 ballgame with 3:48 to play in the third.
“I think the girls could sense that this was a game that we could put out of reach. It just took us until the third quarter to actually do that,” McWhorter said. “I challenged them at halftime to continue doing the defensive things that we did at the very beginning to jump on them. I thought when we got a little bit of physically fatigued that we mentally quit working on defense and doing some of the things that we needed to do.”
Corbin, which was held to just 29 percent from the field, going 15-for-52, 2-for-21 from 3, got just one shot out of 11 to fall in the third quarter. The Lady Redhounds turned to the foul line for most of their points in the period, going 6-for-8. They were 12-for-22 overall.
Lincoln took a 54-31 lead into the fourth quarter then closed on a 22-13 run.
“We forced good things tonight,” said McWhorter. “We forced them to 26 turnovers. We had 12 assists. The real negative tonight was letting them outrebound us (36-29) and especially letting them have 15 offensive rebounds, areas of concern moving forward to district play Friday night.”
McWhorter attributed Corbin’s rebounding win to Kaitlynn Wilks’ absence on the boards.
“She’s our leading rebounder,” she said of the sophomore center. “Her back is still sore and she’s a little tentative on it right now so I think she missed some rebounds that she’s normally taking down. I don’t think the other girls sometimes realize how many boards she takes in. Tonight, maybe she was boxing out but she wasn’t going and getting them and teammates weren’t stepping in and helping out to get those rebounds to keep them (Corbin) off the offensive boards.”
Lincoln was 10-for-14 at the foul line. The Lady Patriots had 11 steals and 12 turnovers compared to five steals and 26 turnovers for the Lady Redhounds.