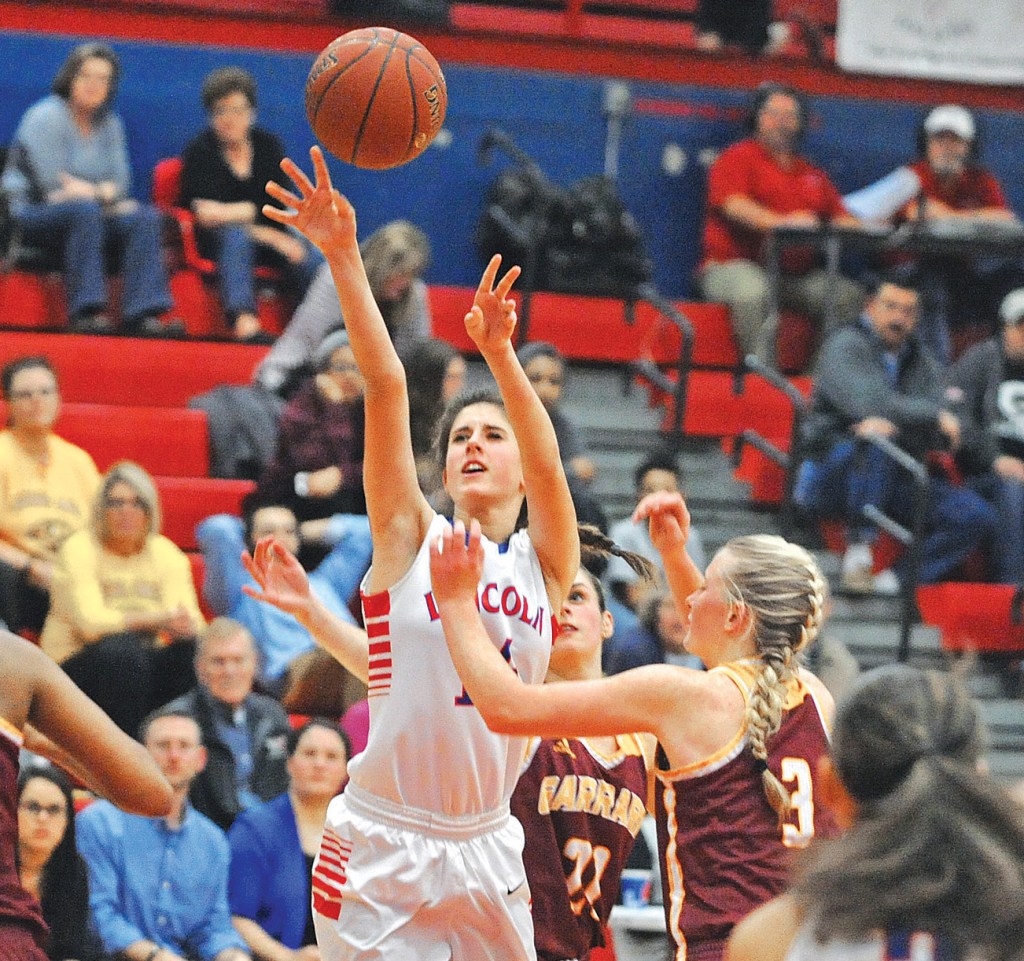 STANFORD — The Lincoln County girls held a 48-25 lead with 6 minutes, 24 seconds to play Tuesday night, but the Lady Patriots had to sweat just a little bit before the final horn sounded on a victory.
Lincoln saw the visiting Garrard County Lady Lions battle back to cut its lead in half before notching a 53-41 win to improve to 12-5 overall, 2-1 in the 45th District.
Lincoln’s reserves gave up the late points to allow Garrard (9-7, 0-3) to get within 10 points, but Lady Patriot coach Cassandra McWhorter never entertained pulling them from the floor.
“We’ve got a quick turnaround with playing Thursday night and we’ve not had that all year so I wanted to get the bench in,” she said. “Players like Lydia Rice and Hailee Barnes work hard in practice like everyone else and I thought it would be good to rotate everybody in to play in a district game. I would have liked to have maintained that 23-point lead but a win’s a win, no matter the point spread.”
Lincoln led after every quarterstop, up 17-9 after the first and 27-16 at the break. The Lady Patriots really distanced themselves from the Lady Lions over the third and fourth quarters, though, using a 21-9 run to post a 48-25 lead.
Kaitlynn Wilks, who led Lincoln with 14 points and 13 rebounds, and Emma King, who added 10 points, tallied six points apiece in the run, Trinity Shearer added four points, Haley Southerland drained a 3-pointer and Jenna King added two free throws.
Maddy Day, who led Garrard with 14 points, tried to rally her team late, scoring six points in a 16-3 closing run. Sam Adams, who finished with 13 points, chipped in five points, Olivia Saylor had four points and Neek Hocker added a free throw toss as Garrard got within 51-41.
While disappointed in the loss, Garrard coach Scott Latham, said he was pleased with his team’s performance.
“I’m very proud of our team. I told them I found out a little about them tonight,” he said. “They showed a little toughness and were able to compete in the second half because they very well could have folded at halftime being down early. I was proud of how they battled and battled and battled and at least stayed in the game and made it respectful. Being down two people for tonight, one hurt and one on an out-of-state trip, they made me proud.”
Garrard led early in the game, with Adams bombing in a game-opening 3-pointer. The Lady Lions held to a 7-6 lead before the Lady Patriots broke on an 11-2 run to go on top to stay. Maddy Boyle opened the run with a jumper and Jenna King, after hitting the front end of a two-shot foul, closed by grabbing a rebound off the missed second foul shot and hitting inside.
Garrard was within 19-16 in the second quarter only to have Southerland and Boyle both drain 3’s and Emma King sink two foul shots for the 27-16 halftime lead.
Lincoln, which shot 33 percent from the field (18-for-54), doubled up Garrard in scoring at the foul line, going 14-for-17 to Garrard’s 6-for-15 stint. The Lady Lions were also 33 percent from the field (15-for-45).
“They did some things well to defend us tonight,” McWhorter said. “Our shooting percentage was down tonight also. If that changes a little bit it looks better. I thought we missed a lot of easy shots. We had a lot of offensive rebounds. We just missed a lot of shots in the paint that could have really extended that lead. But they really just kept fighting back. But we got the ‘W.’ A big district ‘W.’”