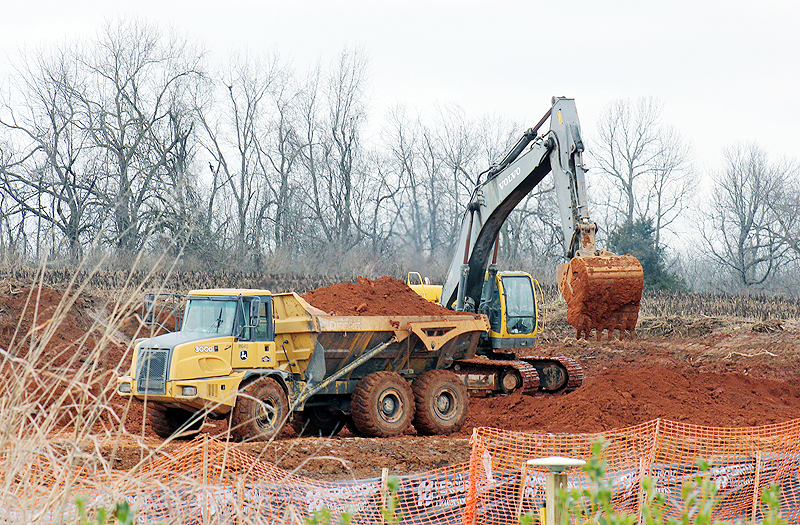 STANFORD – Despite delays due to a recent stretch of wet weather, construction of the Kentucky Fresh Harvest (KFH) greenhouse is moving forward – and discussion of a similar second project is doing the same.

Since KFH’s ground-breaking ceremony in October, construction of the $10.7 million-dollar greenhouse operation has begun and company representatives are eager to move forward and begin the hiring process, according to Marketing and Communications Manager for KHTGH and KFH, Trevor Terry.

“They are doing the best they can, despite the wet weather and it seems that progress is moving along nicely,” Terry said Wednesday. “I think around the middle of next month we should be beginning the construction, at least foundations and that sort of thing. That’s all dependent on ground work, course.”

Ky. Green Harvest gets state tax incentives
Even more local jobs could be available in the near future now that a second greenhouse operation has received preliminary approval for state tax incentives, according to the Kentucky Economic Development Finance Authority (KEDFA), as well as support from the Lincoln County Fiscal Court.

Curt Meltzer, COO of KFH and the man credited with bringing the company’s high-tech greenhouse technology to the U.S., said now that KGH has received support from the state and local government they are currently in the process of securing funding for the project.
“We have a written commitment from a private funder and we’re simply waiting for him to be able to complete the funding so we can go forward,” Meltzer said Wednesday.

While the two greenhouse projects are similar in size, operation and location, Meltzer said some differences exist – KFH will produce cherry tomatoes while KGH plans to grow bell peppers. Both products are to be sold to out-of-state, national wholesalers.

“They are different companies with different partnership structures,” he said. “Kentucky Green Harvest will have different
partners.”

Preliminary plans for KGH include the potential for another 75 jobs, as well as the purchase of an additional 28 acres adjacent to the KFH project site, which Meltzer said will benefit both operations.

“There is one interesting feature – the attraction for outside investors is that, by building it on that land, we’ll be able to share some of the expense,” he said. “So some of the structures like the nursery and the packing house and offices and parking lot, they will be able to be shared between the two projects. So it will only cost each project half of the construction cost. And there may be some shared payroll and other employee possibilities.”

In December, KGH received approval for up to $190,000 in tax incentives through the Kentucky Enterprise Initiative Act (KEIA). According to KEDFA documentation, $190,000 is the approved recovery amount for the greenhouses’ construction materials and building fixtures. Additionally, KGH received preliminary approval for up to $1.5 million in tax credits through the Kentucky Business Investment (KBI) program.

Lincoln fiscal court magistrates approved an inducement resolution during the Jan. 10 meeting, committing to the issuance of up to $12 million in industrial revenue bonds.

In April, a similar resolution was approved for KFH and County Attorney Daryl Day told magistrates then that “if the company is taxed at an agricultural rate, it may be cheaper and reduce the value of equipment and land, therefore they may not request that you issue the bonds.”

Day assured magistrates in April that the similar IRB for KFH did not obligate or hamper the county as far as borrowing or bonding capacity.

While plans for KGH are preliminary at this time, George Leamon, executive director of the Stanford-Lincoln County Industrial Development Authority, said the potential for additional job creation and economic growth is exciting for the area.

“You’re looking at about $25 million dollars invested in the two projects and job creation of about 150,” Leamon said. “The good thing about that is, of that 150, those aren’t folks coming in from other parts of the country. There are some skilled positions but the bulk of those jobs are newly created, local jobs.”

Both projects fit well with the agriculture base of Lincoln County, Leamon said.

“I think the nice thing about this project, that is so different from many projects in rural Kentucky counties, this project is located within city limits. So you’re generating occupational tax for both the county and the city,” he said.

Regional economic development is a priority for the local Industrial Development Authority, Leamon said, and the introduction of a second greenhouse operation, along with the ongoing expansions of several existing businesses, is a welcome addition to Lincoln County’s economy.

“We are doing well,” he said. “What’s really cool about this is this is our golden opportunity to showcase Stanford. This is cutting-edge agriculture.”